BLOG TOUR - Some Like It Wild by Michelle Leighton 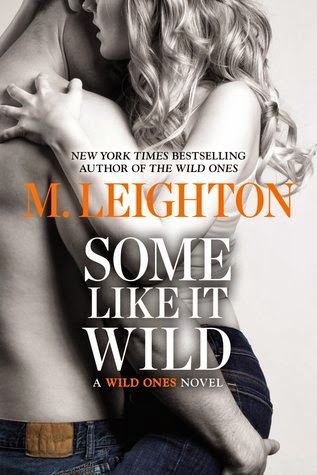 First was The Wild Ones. Now, the next book in M. Leighton's Wild Ones series...How far will a good girl go for the bad boy she loves?Laney Holt is a preacher’s daughter. A good girl. Her only goal was to get married, have babies, and live happily ever after, just like her parents. Only that didn’t happen. The two people closest to her betrayed her, and Laney’s dreams came crashing down. Now she’s left with an empty space she doesn’t know how to fill. Until she meets Jake Theopolis, a daredevil with a death wish who has heartbreaker written all over him.Jake has no interest in thinking beyond the here and now. All he wants out of life is the next rush, the next “feel-good” thing to keep his mind off the pain of his past. His latest rush? Showing Laney there’s more to life than being a good girl—and that going bad can be so much fun. Her only concern now is how she can ever hope to satisfy the wild side of a boy like Jake. She’s looking forward to trying. And so is Jake.If you love The Wild Ones, you'll be just as wild for M. Leighton's Bad Boys series which includes Down to You, Up to Me, and Everything for Us.

Laney has always done the right thing. Except that one time she ran into Jake before she left for college. They shared a kiss that she could never forget, but she knew that Jake wasn’t the type of guy to provide her with the life she wanted. She wanted to have a family based on around a marriage filled with love. That was not what Jake had to offer.

A few years and a heartbreak and betrayal later Laney finds herself assigned to inventory Jake’s family’s Peach Orchard. Jumping at the chance to get away from the drama of her ex-fiancée and ex-best friend. She finds that Jake still holds the same allure; however, this time she’s not looking for the happily ever after. It’s time for adventure and breaking out of her safe and secure life, which turned out to be neither safe nor secure.

Jake has made a good life for himself, in spite of his need to never allow himself to love anyone else. He learned early on that when he loved someone it only caused him pain; a lesion his father never let him forget. Jake grew up to raise hell and he knows he earned his reputation, but he also knows what it means to be loyal and do the right thing. Doing the right thing is how he ends up back on his family’s peach orchard, trying to save it from his aunt.

Once Jake discovers Laney is there, it’s a bonus. Even Jake has honor, so Laney has to tell him what she wants. When she finally gives in, Jake throws open the doors to a life she never expected. He’s upfront that all she can expect is a few good times. As they spend more time together, lines blur. Both want something they can’t have.

Throw in a few know at all interfering supporting characters and it’s a doozy of a story. Will Jake and Laney overcome their expectations, or lack thereof? Will they be able to see through machinations of the people around? Do their eyes open to see the person standing before them? You’ll have to read Some Like It Wild to find out.

Posted by Naughty and Nice Book Blog at 8:12 PM