BLOG TOUR WORTH THE CHANCE by VI KEELAND 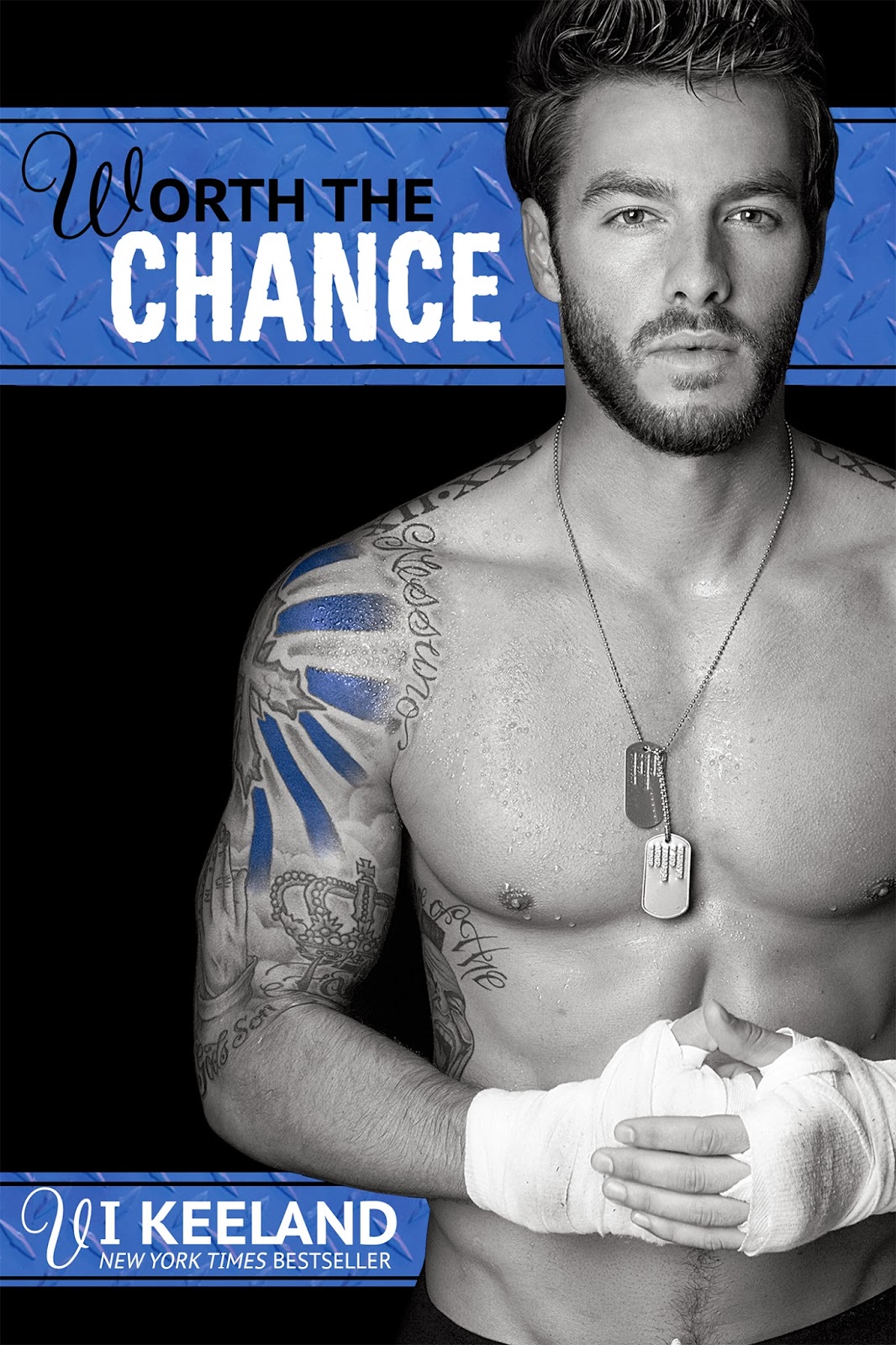 This book may be read as a stand-alone, but I strongly suggest that you read Worth the Fight prior to reading this book. This book focuses on a different set of main characters, however, characters from Worth the Fight appear in this book and it makes a lot more sense if you read it beforehand.


“I don’t think it matters what we plan for ourselves. Some things in life are just too powerful to change.” ~ Liv

Liv Michaels had always admired Vince Stone from afar or he would appear in her dreams. Being the shy, quiet girl that she is, that would be the closest she would ever come to someone like him. He is hot, outgoing and very popular. Complete opposite from her. He would never look her way, better yet, he would never talk to her. Everyone dismissed Liv. But once she became his tutor and they got to know each other, things changed. In the end, she got her heart broken. 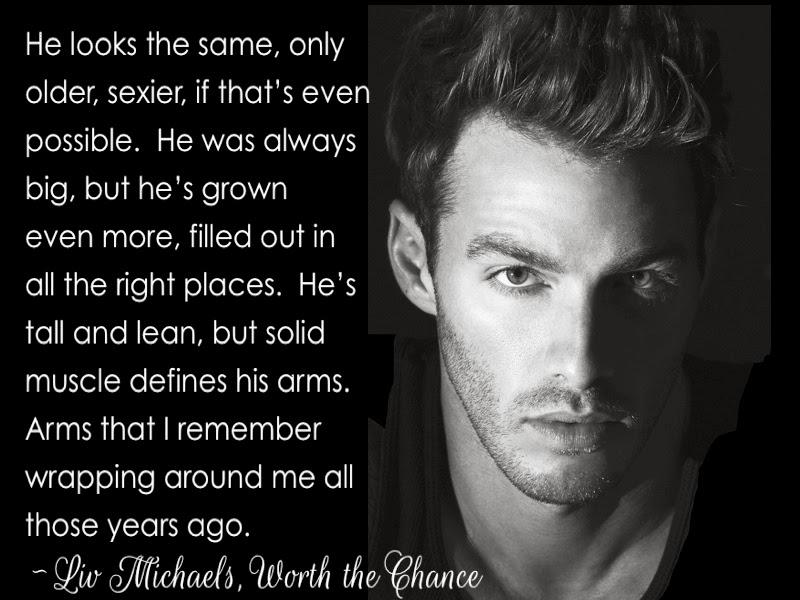 Vince Stone has always loved fighting, but usually gets in trouble for it. He has had a very troubled childhood; growing up with a single mother. She tried her best to be there for him when she was straight, but it seems like he took care of her more times than not. When he started going to Nico’s gym, he took Vince in and took him under his wing. He may have just been in high school, but he was able to help turn Vince’s life around and turn his love for fighting into something good.

Liv is only one big assignment away from landing her dream job. The job she has always wanted for as long as she can remember. She just needs to beat her competition, who has the advantage with this job because of “daddy dearest” and her looks can get her pretty much everything she wants, however, she can nail this job with her brains. Little did she know, her final assignment would land her in the same room with the same Vince Stone that broke her heart all those years ago. Vince is now all grown up and a professional fighter, who is also teaching the self-defense class that she is currently in. One look at Liv and he wants her.

“Its just you. It’s all too much, too fast, and too intense, and it scares me. Scares the hell out of me.”

“Trust me about one thing, Liv…whatever is going on between us, it’s going to happen. You can make it as difficult as you want, but we, Liv, are going to happen. Neither one of us can stop it.”

The connection between Liv and Vince is just too strong. It’s as if they picked up from where they left off all those years ago. There was always something between them and it seems as if it never left. There is no denying that Vince wants her, but she keeps on fighting it. Vince loves women. He is seen with a different woman every night. Heck, the day he saw Liv again for the first time he was seen with a girl. She doesn’t want to put her heart on the line again. Her mind tells her one thing but her heart tells her another. One look at him and there is no denying that she wants him too.

Vince is very persistent when it comes to getting what he wants, especially when Liv is involved. He finally wore her down and she gives in to her feelings. She’s very cautious at first with her feelings, as she should be with him considering past history. She still doesn’t understand why he would want to be with her when he could have any other girl out there. The sexual chemistry is defiantly there. Vince has got a bit of a dominant side to him. He likes to be in control in the bedroom and boy does he like it rough. And hot damn is it hot! Like panty melting hot! He may have a dominant side, but when it comes to Liv, she wants to show her love. I just love the relationship that they have. It goes beyond a physical one. They have a much deeper connection. It’s like he wants to be a better person because of her. They may be opposites, but they get each other.

Even with the terrible childhood that Vince had, he still checks on his mom after all these years to make sure she is alright. Whenever she gets herself into a bad situation he always tries his hardest to get her out of it, no matter what it takes. Normally he keeps his past to himself, but with Liv, there is not hiding it from her. She doesn’t judge him, she goes with him along for the ride and supports him. I love her for that. She sees no flaws in him. But what happens when his mom gets him involved into something that could cost him his future?

Liv turned down the assignment but was given an even bigger assignment that still involves Vince and his “birth” father. Not wanting to get him hyped up what could potentially be nothing, she digs into the story behind his back. Yes, she feels guilty for doing so and desperately wants to tell him, but would much rather find out all the facts before breaking him the news. However, the truth, or hiding this secret could potentially ruin the relationship that they have.

Will Vince be able to help his mom get out of this jam? Or will it be worth the chance to possibly lose the opportunity to get what he’s been working so hard to get to? Can Liv put her walls down and give herself freely to Vince? Is Vince capable of being in a relationship and loving someone? Will Liv be able to tell Vince about the story she is working on? Or will she keep it from him until she finds the end? Will Vince feel betrayed over her hidden secrets? Will finding the end truth about Vince be worth losing her dream job over? Is their relationship worth the chance to risk it all?

I absolutely LOVED this book! Vi did not disappoint me! I was patiently waiting for this book as soon as Worth the Fight came out and boy did she outdo herself with this one. I fell in love with Vince. With other women, he treated them roughly and like doormats you could say. With Liz, yes, you could tell he had a dominant side, but he was much softer with her. You could tell her truly had feelings for her. He was rough and tough on the outside, but with her, he was different. He always put her first before anything. I loved Liv for being such a strong and stand up person. I agree with the things that she did and the sacrifices she made. She always put Vince’s needs before hers, even when he didn’t realize it. It takes a lot to balls to do what she did. Heck, I don’t think I’d be able to do it honestly. I can’t wait for the next book in this installment. If you haven’t read this book yet, you defiantly should! Great job Vi! 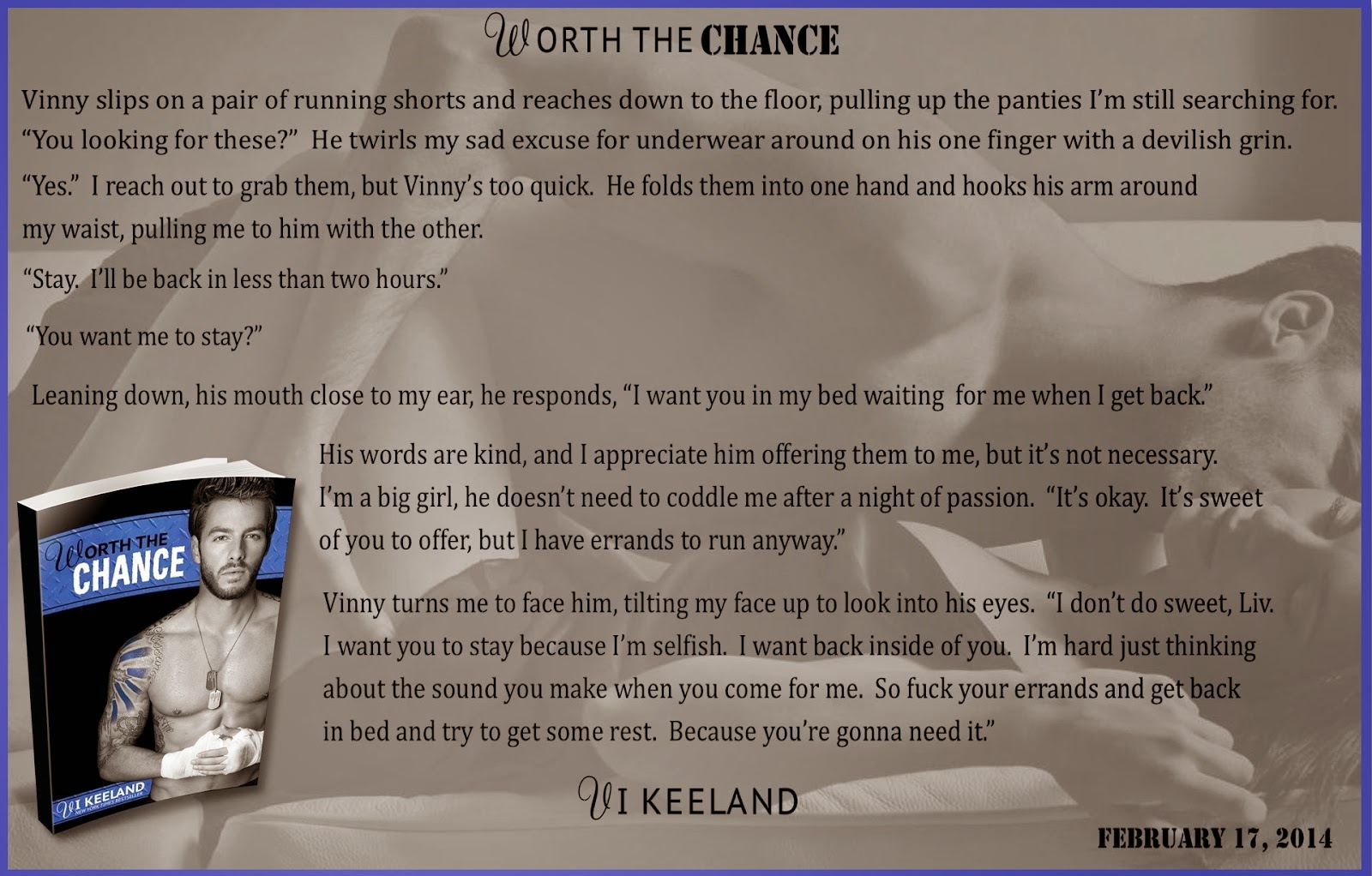 Vi Keeland is a native New Yorker with three children that occupy most of her free time, which she complains about often, but wouldn't change for the world. She is a bookworm and has been known to read her kindle at stop lights, while styling her hair, cleaning, walking, during sporting events, and frequently while pretending to work. She is a boring attorney by day, and an exciting New York Times & USA Today Best Selling smut author by night!


**Here is the link to the rest of the tour if you would like to continue to follow:  http://atomrtours.com/worththechance/**