REVIEW: Bully (Book 1 in the Fall Away Series) 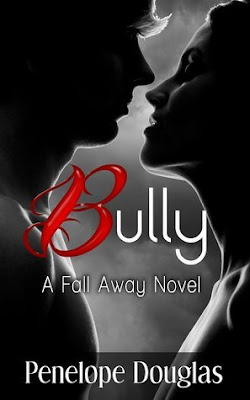 My name is Tate. He doesn't call me that, though. He would never refer to me so informally, if he referred to me at all.

We're neighbors, and once, we were best friends. But then, one summer, he turned on me and has made it his mission to screw up my life at every opportunity. I've been humiliated, shut out, and gossiped about all through high school. His pranks and rumors got more sadistic as time wore on, and I made myself sick trying to hide from him. I worried about what was around every corner and behind every door.

I spent a year studying abroad and bathed in the freedom of life without Jared. Now I'm back to finish up high school and get the hell out of here forever. I'm hoping that after a year of breathing room, he's moved on and forgotten all about me.

But even if he hasn't changed, I have. I'm not interested in avoiding him or turning the other cheek anymore. We're going to go head to head, because neither of us wants to back down.

Tate and Jared were best friends since she moved next door to him when she was ten (10) years old.  Tate and Jared were inseparable.  They were together all of the time.  They were like peas and carrots.  And then EVERYTHING CHANGED!!!  The summer before starting high school, Jared went to spend time with this father.  When Jared returned home, he wouldn't speak to Tate.  The only time he spoke to her was when he was being mean to her. Tate had no idea what she had done.  Why was her best friend ignoring her?  Had she done something to piss him off?  Tate could not wrap her head around Jared's behavior.


For two (2) years, Tate was bullied in high school.  She was made fun of, taunted, pranks were played on her and she knew who was behind all of it.  Tate had three (3) lifelines, her cellphone, car keys, and money.  She always made sure to have them close by, in case she needed to make a quick get away.

“What was worse than losing you was when you started to hurt me. Your words and actions made me hate coming to school. They made me uncomfortable in my own home.”  ~ Tate

Tate decides she needs a new beginning, she needs a break from her life at home and decides to go to school abroad for a year.  Things were looking brighter for Tate, however, Jared was struggling with Tate being away.

When Tate returns home, she vows not to be a victim anymore.  She is going to stand up for herself.  “Isn’t it about time you fought back?”  Tate is hoping that Jared and his best friend Madoc found someone else to BULLY.  Tate is not going to let her guard down, she doesn't trust Jared or Madoc.  When Tate returns home, people begin to see her in a different way.  Had she changed while she was away?  Tate doesn't understand why people are paying attention to her all of a sudden.  She was even asked out on a date.  She had been asked out on a date before, but she was always stood up.

Jared always keeps Tate at arms length, but never out of his sight.  He has always looked out for her, even if he did it in a sick and twisted way.  I know when we were younger, our parents would always say, if he makes fun of you or picks on you, that usually means he likes you.  I know that usually applies when we are talking about 5 (five) year olds, but does it stand true with eighteen (18) year olds?

The torment that Tate endured, broke my heart.  She was humiliated time and time again, but I have to say, she was a trooper and she finally came back swinging.  She was not going to be BULLIED any longer.  It seemed like once she stood up for herself, things would change.  Tate was a magnet for DRAMA.  Things always seemed to happen to Tate, she could never catch a brake.

Jared was living in the past.  He was struggling with what happened with his father, and with what he had done to Tate.  He couldn't get over the anger that he felt.   If Jared was hurting, he felt the need to hurt someone else.  That someone else, just happened to be Tate.  Jared was an arrogant prick to say the least. Yet time and time again, I began to like him.  It is obvious that Jared and Tate have feelings for each other.  The chemistry is definitely there.  Can Tate forgive Jared for everything he did in the past?   Can Tate learn to trust Jared again?  Can Jared earn Tate's trust back?  Only time will tell.....

Sometimes in life you come full circle. You end up where you started out. Is this even possible for Jared and Tate? Could they move past their yesterdays and begin a new tomorrow together?

“You were the person that turned things right again. With you, I became courageous and free. It was like the part of me that died with my mom came back when I met you, and I didn’t hurt if I knew I had you. Then one day, out of the blue, I lost you, too. The hurt returned, and I felt sick when I saw you hating me. My rainstorm was gone, and you became cruel. There was no explanation. You were just gone. And my heart was ripped open. I missed you.” ~ Tate
I think BULLY is a book that everyone should read.  Once I started it, I was captivated by the intensity of the story.  The chemistry between the characters is very real.  I actually felt like I was back in high school seeing all of this unfold before my eyes.  BULLY flowed effortlessly, Penelope did a FABULOUS job with this novel.  I look forward to reading "Until You" (Fall Away #1.5) Jared's POV in November 2013.

I will leave you with quote, which I absolutely LOVE !!!

"Yesterday lasts forever.
Tomorrow comes never,
Until You."
~ Jared
This review was prepared by Heather.

TEASER:
"You said you loved me.  I hate that we lost that," I said sadly.
Bending down, he grabbed the backs of my thighs and lifted me up.  My breath caught, and I held onto his neck.  His warm body only made me want to curl up in him.  I wrapped by legs around him as he walked to the bed and sat down.
He put a hand on my face and guided my eyes to his.  "We never lost that.  As much as I tried, I could never erase you from my heart.  That's why I was such as asshole and kept guys away from you.  You were always mine."
"Are you mine?" I asked as I wiped my tears.
He kissed the corners of my mouth softly, and I felt heat rise up my neck.  "Always have been",  he whispered against my mouth. 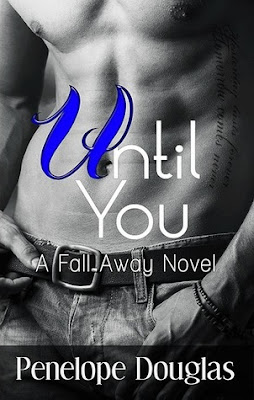 EXPECTED RELEASE: NOV. 2013
SYNOPSIS:
Have you ever been so angry that hitting things felt good? Or so numb that you actually felt high? The past few years have been like that for me. Traveling between fury and indifference with no stops in between.

Some people hate me for it, while others are scared of me. But none of them can hurt me, because I don't care about anything or anyone.

I love her so much that I hate her. We used to be friends, but I found out that I couldn't trust her or anyone else.

So I hurt her. I pushed her away.

But I still need her. The sight of her centers me, and I can pool all of my anger into her. Engaging her, challenging her, bullying her...they are my food, my air, and the last part of me that feels anything human.

But she left. She went to France for a year, and came back a different girl.

Now, when I push, she pushes back.

a Rafflecopter giveaway
Posted by Naughty and Nice Book Blog at 9:16 AM