BLOG TOUR ==> Easy to Love You by Megan Smith 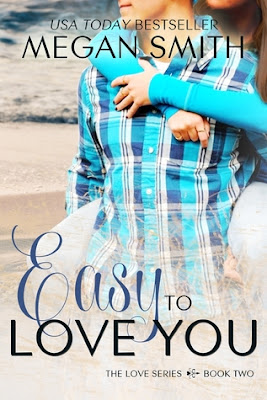 SYNOPSIS:
Hunter finally has MacKenzie Cahill, the girl of his dreams. A horrible accident finds those dreams threatened. As their lives change, secrets begin to surface. These revelations could prove to be either the downfall of Hunter and MacKenzie or the catalyst that strengthens their bond. Hunter has painful choices to make. Will he realize what he has before it’s gone? He knows what he must do to save his future, but will he be leaving everyone else in his past? Will the bond between the two families be strong enough to keep them together?


Wow! Megan has outdone herself once again! She left us with that horrible cliffhanger in Trying Not to Love You. I got right into the book that I finished quicker than I wanted to. I felt that I read it way too quick that I had to reread it right after I finished. The second time was just as amazing as the first time. There’s a lot more drama in this book, that will definitely keep you on your toes.

Kenzie is on her way to her doctor’s appointment, where Hunter is to meet her. She never shows, but Hunter does. He panics when he realizes it is unlike her to be late to anything. When it comes to his attention that she has been involved in an accident where her car goes off the embankment and she needs to be airlifted to the hospital, his whole world stops. Hunter lives his life for Kenzie (whom he calls CC) and their unborn child. He will do anything to keep them safe. He will never forgive himself if something happens to them.

The doctor’s needed to perform an emergency C-section to save the baby. CC suffers from a broken wrist and ankle. CC took most of the impact, pretty much saving the baby’s life. She has been kept in a coma the entire time, hoping to recover consciousness on her own.
Because of the coma, CC missed a week of their son’s life. Hunter was an amazing man and did something not a lot of men would do. He stepped up to the plate. Hunter took care of their son as best as he could, while still trying to take care of CC and hoping she wakes up. The father and son bond was created that week. Hunter became a natural. His love for CC truly shows. He would spend all his time with the baby and with CC until she would wake up.

When CC finally wakes up and she realizes that she has missed a week of their son’s life, she is filled with nothing but guilt. When Hunter and their son needed her the most, she feels as if she failed them. Hunter and CC have such a connection that goes beyond sex, that he can sense that something is wrong. They can just look into each other’s eyes and it gives away exactly what they are feeling. The feelings they have for each other go beyond just love, they are soul mates.  Hunter reassures her that she did her very best to protect him and that she saved him by taking most of the impact. It is love at first sight when she sees him for the first time. Now they need to try and adjust to life with a newborn.

CC can’t help but feel that everyone is keeping something from her, but no one will fess up and tell her. She hates the fact that they are keeping her out of the loop and keeping things from her. They have always done that to her growing up. Her family felt that keeping her in the dark would protect her and keep her safe. When things finally get out of hand, her dad confesses that he’s been keeping something from her for years to protect her and keep her safe. This completely pisses CC off. Everyone knew. They should have just been honest with her and still kept her safe. Feeling hurt and betrayed, CC cuts her family off for a bit.

Someone from Hunter’s past comes back into his life. Someone he wishes he would never see again. Someone he wants to stay far away from his family. It is his duty to protect CC and Ryder and this is one person that he must protect them from. He desperately wants to tell CC all about his past and who has come back, but he doesn’t want to stress her out more than she already is. He wants her to focus on recovering. Hunter wants to find out why he is here after all these years. How did he even find them and what will he do with them? But until he gets all those answers he must keep him a secret from CC. But when will it be the right time to tell her news like that?

How will CC take it when she finds out the truth? To know that Hunter, the one person who she trusted and told everything to, kept something so big from her? Will she feel betrayed all over again? Will she be able to forgive him? When they both hear the entire truth about everything, will they be able to stomach it? Hunter will learn some secrets kept from him as well. Will he be able to handle them and still support CC? Will they both be able to handle what the outcome may bring? Is this something that they can recover from together?  Or will this be the breaking point?

“I can conquer the world with one hand, as long as you are holding the other.”

Mason and Hailey are quite the pair. Their relationship is very hot and cold. You can never tell if they are together or not. Hailey spends a lot of time pissed at Mason in this book, but it’s only because she is looking out for Kenzie. She hates the secrets that are being kept from her best friend. But you can tell that Mason is truly trying to make the relationship work. I love their back and forth banter though, but I really wish they could get their act together. Hailey is still the old Hailey that we all know and love.

Jailynn and Cooper are a different story. I have no idea what their story is. They say they aren’t together, but yet they’re always together. They spend the night together, but yet, they haven’t slept together. It really makes you wonder what is going on there. Cooper is the biggest player among them, but he seems to be changing, since he’s spending every minute with her. Can he finally be a one woman man? Or will he get bored and want something different?

I absolutely loved the book. Hunter captured my heart. The way he loves CC and just how he stepped up and cared for Ryder. He truly does love her. CC just wants everyone to stop babying her and I get that. She is tough and can actually handle what gets thrown at her. I admire her for her determination. The families are still pretty close knit and I love it! CC and Hunter are thrown into this obstacle and both families must come together to help them get through it. It's as if they can get through anything with their families behind them. Great job Megan, can’t wait to see what Mason and Hailey have in store for us!

EXCERPT:
"Damn dude, keep that shit in your pants. You’re going to scar my nephew."


This time CC, Cooper and Jaylinn were laughing. I glared at all of them and walked over to the door, counting backwards.

"Chaos, huh?" CC asked. I turned to look over at her, wondering if she was going to tell Cooper that we’d decided to keep the name.

Cooper smiled, "Yeah. You know he was born in complete chaos."

CC winked at me before looking at Cooper, "Well Coop, meet Ryder Chaos, Ryder meet Uncle Coop but please, Mommy is begging you, don’t grow up to be like him."


Cooper stood up and came to stand by me, glaring at the girls. The door hit me in the back and I stepped forward for Mason to stick his head in.

ONE CLICK AND BUY YOUR COPY OF
"EASY TO LOVE YOU"

When Megan Smith is not writing she is a wife to her high school sweetheart and a mom to her son. She lives in the New Jersey. At the end of the day when she is done work and being a mom you can find her curled up with a good book or writing on her current story. 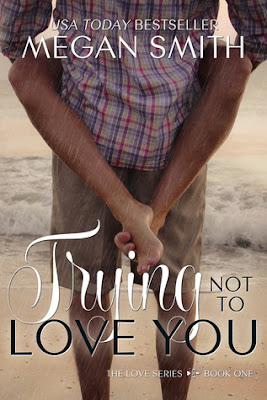 TRYING NOT TO LOVE YOU (LOVE SERIES #1)
SYNOPSIS:

MacKenzie Cahill has dealt with overbearing and overprotective brothers her entire life, making it near impossible to enjoy her teenage years. Having a boyfriend was practically impossible until she met a guy that wasn't afraid to stand up to them - Dominic. He was sweet, thoughtful, and everything MacKenzie ever wanted in a man.

Her world is turned upside down after a party, and her brothers' best friend Hunter is the one there to offer her a shoulder to cry on. The chemistry between them is electric, and feelings for each other that have been hidden for years are finally voiced.

a Rafflecopter giveaway
Posted by Naughty and Nice Book Blog at 7:18 AM