PLAY ME (TAKE A CHANCE#3) RELEASE DAY by DIANE ALBERTS

SYNOPSIS:
Even the best-laid plans can go awry

Single-mom Kiersten Worth knows a bottle of champagne and night of hot, no-strings-attached sex is the perfect solution to her jilted bride blues…and Garrett Kelly, long-time friend and her teenaged son’s sexy basketball coach, is just the stud for the job.


Garrett wants more from the elusive temptress than a casual affair, but he never expects it to come in the form of an unexpected pregnancy. When he proposes an unorthodox solution—move in and raise their baby together—Kiersten has to decide whether to let down her guard and open her heart to the man who secretly loved her for years, or risk losing his tender embrace for good.

Diane Alberts has always been a dreamer with a vivid imagination, but it wasn't until 2011 that she put her pen where her brain was, and became a published author.  Since receiving her first contract offer, she has yet to stop writing. Though she lives in the mountains, she really wishes she was surrounded by a hot, sunny beach with crystal clear water. She lives in Northeast Pennsylvania with her four kids, a husband, a schnauzer mutt, a cat, and a Senegal parrot. In the rare moments when she's not writing, she can usually be found hunched over one knitting project or another.
She is a multi-published, bestselling author with Entangled Publishing, Swoon Romance, and Decadent Publishing. ON ONE CONDITION hit #18 on the Barnes and Noble Bestseller List, and TRY ME hit #76 on Amazon. CAPTIVATED BY YOU hit #31 on the Barnes and Noble bestseller list.  Her goal is to write so many fantastic books that even a non-romance book fan will know her name. She also writes New Adult books under the name Jen McLaughlin. Diane is represented by Louise Fury from the L. Perkins Agency. 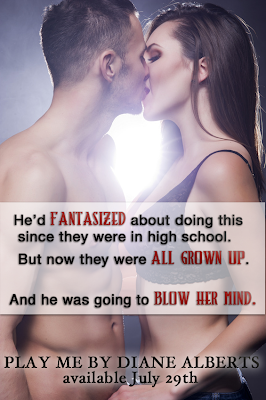 Diane is offering up a $10 Gift Card to Amazon or B&N for one lucky reader.

Posted by Naughty and Nice Book Blog at 6:51 AM