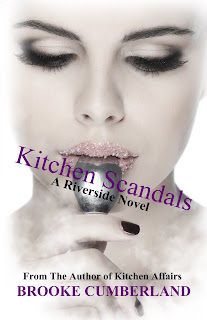 She finally found the one…
but he has a hidden secret. Could this be the breaking point for Molly?
Has she endured too much?
Drake and Molly had instant chemistry in Kitchen Affairs, but when secrets go all wrong, their relationship will be tested, feelings get hurt, and limits will be reached.
Someone interferes with their relationship, keeping them distant and longing for answers in all the wrong places. Some people are not who they seem... leaving a betrayal of lies crashing down on them.
Can they recover their once intense, sensual chemistry? Will love be enough?
Secrets, betrayals, and scandals…
Chicago’s hottest couple, Molly & Drake, go through big changes, hidden secrets, and tragedies.

*Be advised this review has a few spoilers*

Wow! If you're looking for a book that is filled with non-stop drama that will have you biting your nails and sitting at the edge of your seat, Kitchen Scandals is the book for you. I became emotionally invested in the characters from the Kitchen Affairs that all I wanted was for Drake and Molly to have their happy ever after. I was so engrossed in the story; I could not put the book down.

The sexual chemistry between Molly and Drake continue, with their relationship growing into more of an intense level. I think it’s really cute that Drake set an anniversary date for them and Molly didn’t even know about it. This is the first anniversary he’s ever had so he is making it a special one. I would definitely not mind having mind-blowing sex all night then having to wake up to a half- naked hottie making me breakfast.

“Molly, you already have the key to my heart, but now I want you to have this key – the key that brings you home.” ~ Drake

I’ve fallen more in love with Drake in this book. He is still the dominating, jealous, arrogant businessman we know, but his love for Molly is very clear. He is always putting her needs first and making sure she has the very best. Drake has treated Stella like she is his very own, earning him the title “Daddy Drake.” Drake also knows that Michael has always been a part of Molly and Stella’s life that Drake has welcomed him to live with them as well.

Molly is a chef at The Riverside, where Nikkos is taking her under his wing and also the restaurant Drake manages. Nikkos and Molly have great work chemistry together, it seems natural for them to be working side by side. Nikkos periodically says some sexual comments at Molly and touches her every now and then giving Molly a very weird vibe, but she brushes it off every time. Drake catches Nikkos with his hands on Molly and threatens him if he touches her again, but not even his threat stops him from continuing the inappropriate comments and gestures.

Shortly after Molly and the gang move in with Drake, mysterious notes appear in their house, including their bedroom. This totally freaks the both of them out since their penthouse is locked and secured. Whoever has done this has complete access and is very quick and quiet about putting the notes out. This happens several times, putting both Molly and Drake on edge. They have their suspicions, but their leads come up empty.
Drake suddenly leaves town without telling Molly. She is worried that he is keeping something from her and that he is drifting away. Drake has kept a secret from Molly. He is terrified of losing her once his secret is out, which is why he has not told her about it until all the facts are straight. He has a son and he went out of town because he finally tracked down the mother. She has fled the country with their son because she didn’t want him being exposed to the media and the small fame Drake has. Will this secret ruin what Molly and Drake have? Will Drake be able to come clean about his long lost child or continue to keep him a secret?

When Molly finds out, she naturally feels hurt and betrayed that Drake would keep something so big from her, especially since he has known since the beginning of their relationship. It makes her question if he has been lying about anything else or possibly if their entire relationship is a lie. When Drake finally comes clean about everything, she stands by him as he gets to know his son. The unfortunate thing about this whole thing is Molly having to deal with Violet, his son’s mother. She is a slimey, jealous bit** who will do anything to get Drake back and breaking them up is one of her top priorities. She is trying to weasel her way back into Drake’s life and is using their son to get to him. Every time she came up in the book, I was thinking of not so nice things that could happen to her; she just needed to let them be. Drake was trying really hard to get to know his son, Liam (notice the irony in his name since that is the name of Molly’s fiancé and Stella’s dad who died), while being friendly with Violet so she doesn’t run off again. Will Molly be able to deal with whatever games Violet has to offer? Will Drake be able to resist temptation and stay true to Molly? With the notes still appearing and now Violet, how much more can Molly handle?

Drake is not the only one with secrets. Molly has secrets of her own that she has been keeping to herself since she was a child. It’s a secret she plans to never remember, but one that still haunts her. With everything going on, she must reveal her secret to Drake. She doesn’t want anyone to feel sorry for her, especially Drake. But after further investigating, the person responsible for the notes seem to point back to Denny, an old friend of her dad’s. Drake feels that the best way for Molly and Stella to be safe is if they stay low for a bit. But secluding them could be the biggest mistake he ever made. The person they least expect, the one that is supposed to be Molly’s friend, is one step ahead of them and is ready to make his move to end this game for good. He has always wanted Molly, but knew Drake was in the picture. He’s had a taste and wants her for good; he will do anything to make her his even if that includes getting rid of Drake.

Will Drake be able to get to Molly in time and save her from the crazy madman? Will Drake and Molly’s love for each other be enough to help them get through everything they are dealt? Will they finally get their happy ending?

My heart broke several times throughout the book, for all the characters. Molly has been through so much in her life and to have to deal with Drake’s secret, the notes and Nikkos all at once threatens to break her. I admire Molly for supporting Drake when it comes to his son. Although she hated Violet, she played nice so Drake could have his time with Liam. Drake is put in a very tough position; having to please Violet, without hurting Molly. Even with everything going on, Drake always tries to put Molly first. Stella is such a sweetheart and will be straightforward about everything. There are times when she has conflicted feelings about Drake, but yet still wanting to know more about her real father. Even though Liam passed away when Stella was a baby, Molly still makes a point to tell Stella all about him. Michael has been the one constant in Molly and Stella’s life and is the best friend everyone wants to have.

This book seriously is a rollercoaster of emotions. This story has more drama thrown at you than in the first book. It will definitely keep you on your toes and will not bore you at all. The story will capture you and stay with you till the very end, and will have you wanting more. It does leaving you hanging in the end a bit, making you wonder WTF is going to happen next! Great job Brooke, I can’t wait for the next one!

Brooke is a midwestern gal, from the cheese state of Wisconsin! Go Packers! She's a stay-at-home mom of three beautiful children (one daughter & two stepsons) and a black fury dog. She's studied psychology in college, and counseling and education in graduate school where she found her love for writing. Most days you can find her reading or writing, or just hanging out with her family! She loves movies, cooking, and shopping! She's addicted to Starbucks, Coach purses, and wearing yoga pants.


Goodreads Book page: http://www.goodreads.com/book/show/17566166-kitchen-scandals
Posted by Naughty and Nice Book Blog at 7:35 AM