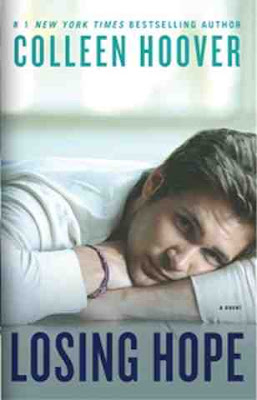 Hopeless was Sky’s story. Now, in Losing Hope, we finally learn the truth about Dean Holder.

Haunted by the little girl he couldn’t save from imminent danger, Holder’s life has been overshadowed by feelings of guilt and remorse. He has never stopped searching for her, believing that finding her would bring him the peace he needs to move on. However, Holder could not have anticipated that he would be faced with even greater pain the moment they reconnect.

In Losing Hope, Holder reveals the way in which the events of Sky’s youth affected him and his family, leading him to seek his own redemption in the act of saving her. But it is only in loving Sky that he can finally begin to heal himself.

Once again, I have to tip my hat to Colleen Hoover. She has out done herself with Losing Hope. I have to say, Losing Hope is by far my favorite male POV book that I have read. Losing Hope did not just reiterate Hopeless, I felt as if more of Holder and Hope's story was being told.


In Losing Hope we see every emotion that Dean Holder (a/k/a Holder) is experiencing while grieving the loss of his sister Les, after she committed suicide.
“I want her to know how her selfish decision affected me. How hopeless she left me. Literally hopeless. And completely alone.
And so, so incredibly sorry.” ~ Dean Holder


As we know, Holder blames himself for the death of his sister and Hope being taken when she was five from her front yard. Holder has been carrying this guilt for thirteen (13) years and it is eating him alive. As if the guilt of losing Hope isn’t enough, Holder is blaming himself for the death of his sister. Why didn’t he know she was that depressed? Did he miss any signs that she may have given him that she was going to commit suicide?
Holder finds a journal in his sister’s closet. When he opens it, it appears to be empty. Holder addresses his journal entries to his sister Les and begins to tell his thoughts and feelings. Holder needed an outlet and he knew his secrets were safe with Les.

The journal entries are what made the book for me.  They touched me in so many ways.  I didn’t think it was possible to love Holder more than I already did, but I fell HARDER for Holder.
My heart broke for Holder.  While Holder was piecing together the puzzle pieces of Sky’s past, he struggles with the truth that he has discovered. Can he tell Sky?  Will it destroy her if she knows the truth?

Sky has shut her feelings off a long time ago. If she feels nothing, then no one can hurt her. I guess this is her defense mechanism.  Sky and Holder begin to hang out and it is obvious there is chemistry between the two of them.  They are both “alive” when they are with each other.  They both feel things that they have not felt in a very long time.  When Holder tells Sky he isn’t going to kiss her, my heart broke for Sky.  But when Holder gives Sky the explanation, you loved and respected Holder, just a little bit more.
“I need to know for sure that you’re feeling every single thing that I’m feeling the moment my lips touch yours. Because I want your first kiss to be the best first kiss in the history of first kisses.” ~ Dean Holder

“The moment my lips touch yours, it will be your first kiss.  Because if you’ve never felt anything when someone’s kissed you, then no one’s ever really kissed you.  Not the way I plan on kissing you.” ~ Dean Holder

Holder, Holder, Holder.  He is in a league of his own. I absolutely LOVE Holder. He has been through so much in life and for him to finally find “Hope” in life, was the best feeling ever. I think Holder said it best.

“Fuck all the firsts Sky. The only thing that matters to me with you are the forevers.” ~ Dean Holder

This is truly a spectacular book. I felt every emotion that Holder was feeling. I think I had tears in my eyes within the first 10 pages.  Colleen Hoover hit the ball out of the park with Losing Hope. I think I loved it as much as I loved Hopeless.  These books are definitely worth reading, and everyone should experience Holder and Sky.  Hands down 6 stars.

I received an ARC for an honest review.


a Rafflecopter giveaway
Posted by Naughty and Nice Book Blog at 7:55 PM