REVIEW ~ BEFORE WE WERE STRANGERS by Renee Carlino 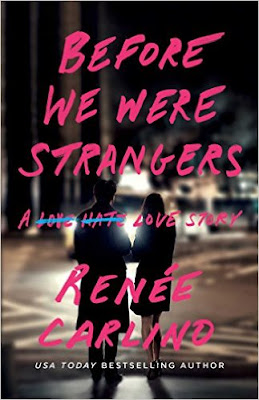 From the USA TODAY bestselling author of Sweet Thing and Nowhere But Here comes a love story about a Craigslist “missed connection” post that gives two people a second chance at love fifteen years after they were separated in New York City.To the Green-eyed Lovebird:We met fifteen years ago, almost to the day, when I moved my stuff into the NYU dorm room next to yours at Senior House.You called us fast friends. I like to think it was more.We lived on nothing but the excitement of finding ourselves through music (you were obsessed with Jeff Buckley), photography (I couldn’t stop taking pictures of you), hanging out in Washington Square Park, and all the weird things we did to make money. I learned more about myself that year than any other.Yet, somehow, it all fell apart. We lost touch the summer after graduation when I went to South America to work for National Geographic. When I came back, you were gone. A part of me still wonders if I pushed you too hard after the wedding…I didn’t see you again until a month ago. It was a Wednesday. You were rocking back on your heels, balancing on that thick yellow line that runs along the subway platform, waiting for the F train. I didn’t know it was you until it was too late, and then you were gone. Again. You said my name; I saw it on your lips. I tried to will the train to stop, just so I could say hello.After seeing you, all of the youthful feelings and memories came flooding back to me, and now I’ve spent the better part of a month wondering what your life is like. I might be totally out of my mind, but would you like to get a drink with me and catch up on the last decade and a half?M

Renee Carlino writes an amazing story about young love, wrong timing, heartache, loss, betrayal, and love. You see a young couple grow into adulthood and experience their breathtaking journey along with them. Prepare yourselves for a ride of a lifetime.

“The city harnesses this collective love and admiration. Grace and I were falling in love with her together.”

Matt and Grace first met their senior year in NYC when he moved into the dorm next door. He studied photography while she studied music. They instantly become fast friends, doing pretty much everything and anything together. Because of this, they knew all there was about the other. They relate well to one another. They get each other. Even on the slimmest budget they make do and have the time of their lives. With them being the best of friends, it makes the transition from friends to lovers an easy one.  Matt and Grace loved each other harder than they loved anything ever before in the short time they had. But the time was never right for them.

“When it was just the two of us together, it was like everything was okay and we could be Grace and Matt.”

Matt is offered an internship with National Geographic in South America after college. It’s an opportunity of a lifetime, one he can’t refuse. Keeping their relationship going, they both agree on the long distance relationship, even though the communication is scarce. Grace hangs on to what they have, but when she is offered an experience to tour the world for her music career, it becomes an offer she may not be able to turn down. When Matt returns from his trip, he is disappointed to return to an empty room and no Grace.

“You have to learn to fly before you can soar.”

Seeing a beautiful girl on the F-train, he realizes a moment too late that she is Grace. The girl from his past. As the doors close, he notices she sees him too and goes after the train but it’s long gone. Five weeks past by with Grace still on his mind. He goes back to all the places they once used to frequent including the college hoping to find a trace of her but comes up empty. Other skeletons keep coming out of his closet, which he asks his boss for a transfer. But instead he suggests using the Craigslist’s post, “missed connections” to find the girl from the train. With no other options out there, he writes his letter that only his Green Eyed Love Bird will understand hoping to get some kind of connection to her.

“Something as simple as a smell, like sugar pancakes at night or the sound of a cello in Grand Central or Washington Square Park on a warm day, could transport me right back to that year in college. The year I spent falling in love with her. It was hard for me to see the beauty in New York anymore.”

Now fast forward to present time. By way of the ad, they find their way back to each other once more. They are actually living close to each other. Matt still doing what he love with National Geographic while Grace is working as a music teacher. As they get to know each other once again, they learn about each other’s pasts; their loves, loss, hurt, secrets, and betrayals. Which could possibly tear them apart before they even get together.

“The city becomes a character in your life, a love you can’t take out of you. The mysteriously human element about his place can make you falling love and break your heart at the same time.”

Can they forgive each other for what happened in the past? Can they both move on from it all? And can Matt and Grace finally find their way back to one another? Or will this be another miss connection for the both of them?

“The only thing you can do is choose the person you love, be kind to others, and make your brutally short stint on early as pleasant as possible.”

Renee Carlino did a beautiful job with this story. I was instantly hooked from the moment I picked this book up until the very end. Renee writes about situations that everyone can relate to, which I loved. While reading, she was able to put me into the book with the characters, as if I was experiencing everything with them. There were so many instances where I just wanted to get up there and hug them, wanting to comfort them, laugh with them or even yell at them. You see the characters develop from a young adult to grown adults throughout this book and that’s a great thing to see. She did a wonderful job writing about the possibilities of second chance love and there is no doubt she is a master at twists and turns and unexpected surprises. Fantastic job Renee!

This book was written by Jenn. I was given an advanced copy for my honest review. 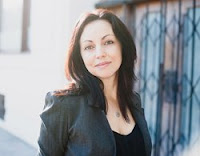 Renée Carlino is a screenwriter and bestselling author of New Adult and contemporary women's novel's. Her books have been featured in national publications, including USA TODAY, Huffington Post, Latina magazine, and Publisher's Weekly. She lives in Southern California with her husband, two sons, and their sweet dog June. When she's not at the beach with her boys or working on her next project, she likes to spend her time reading, going to concerts, and eating dark chocolate. Learn more at www.reneecarlino.com