Welcome to the teaser tour for the contemporary romances through infinity and thanks for the memories by Libby Austin!


1. Tell us a little about yourself.

Hmm Not much to tell. I’m a wife and mother who’s obsessed with books. My favorite color is green, I love crime shows but have a weak stomach, I have a very dry sense of humor, and I’m a Dr. Pepper addict.

2. Your book through infinity, what is it about?

through infinity is about a family coming together when one of them is in need. The overall theme would be ‘does love reside in our heads or our hearts’.

3. Where did the idea for your book come from?

The idea for the book came from my son. My husband had been working out of town for several weeks. He came home for a surprise visit. Our son ran up to him and said, “Hi, Dad! Do you remember me?” Of course my husband said yes, but I wondered what would happen if you didn’t remember, and from there, through infinity was written.

4. The children in the book, their characters where amazing, and Dawson I think will have a special place in readers hearts. Can you tell us about Dawson and is he based at all on someone?

Dawson is probably the only character who’s really based on a real person. He’s based on my son and the son of my editor. Both of our boys share similar traits. I took some of the characteristics from each of them and created Dawson.

5. Do your characters talk to you?

No, they really don’t. It’s more like I see what happens between them.

6. How difficult was it to write about Candice's recovery?

Candice was a difficult character to write because she’s very self-contained, and like most people, she had some thoughts she didn’t want to acknowledge. She’s not very vocal in her feelings and she felt a lot of shame for not “automatically” loving her family. I think that’s a struggle some new mothers, and fathers, deal with. Loving someone, even your child, isn’t always automatic. A lot of parents feel judged for that and guilty for that, so it was something I wanted to highlight.

It was difficult, in a sense, to keep it true to a story of a family coming together without sensationalizing it and turning it into a soap opera. When I wrote through infinity, it felt like most of the “drama” I could add was contrived and really didn’t fit with the story, so I kept it true to the storyline I envisioned.

7. What authors have inspired you?

Too many to name. Even authors of books that I didn’t connect with inspired me because they took the step to put their work out there for judgment. But to name a few:

But most of all, Lois Faye Dyer.

8. Talk about your cover, where did the idea come from and who designed it?

Aww the cover. I could probably write a book on that alone. Lol When I came up with the concept of the cover, I knew it wanted the infinity symbol on it with a color scheme of gold and/or silver. I didn’t want the infinity symbol to be broken, but it needed something to highlight the tension of the story. One night, as I lay in bed (which is when all great ideas seem to appear), the idea of missing puzzle pieces came to me. I passed that on to the cover designer I was working with at the time. When I received the cover mock-up from the designer it was nothing like I envisioned. It had a very somber tone to it, and while through infinity deals with a somewhat somber subject, the overall tone of the book is hopeful, or at least I hope it is.

After seeing that mock-up, I knew I wanted what I was envisioning to capture the story. I approached a different designer with my concept. I had figured out that I wanted something to represent her family as the missing pieces of the puzzle, but I didn’t want faces and I didn’t want silhouettes because they just didn’t convey the correct emotion. That night I was going somewhere and I put on my charm bracelet, and the light bulb turned on, which is where the pictures under the missing puzzle pieces came from.

Then as you see in the book with the chapter headers, the puzzle becomes filled in as Candice gets to know her family, which is why the back cover is a completed puzzle. The puzzle pieces, along with the colored background, also represent another sub‑storyline in through infinity.

Overall, the cover has been well received. I find that those who didn’t like it before they read the book, love it once they’ve finished. Choosing not to put a ‘standard’ cover on it was a risk, but I wanted the cover to really represent the story, and story isn’t about sex, although there’s chemistry.

Nathan with Nate’s Art did the final cover. He did a great job of turning my vision into reality.

9. Do you have a special time of the day you like to write?

I would probably write more at night if I could, but my early morning alarm clocks don’t cooperate with that schedule.

10. What has been the hardest thing about writing?

Writing wasn’t hard. Writing something that was coherent that people would want to read was hard. It’s everything that comes after writing that’s hard.

11. Will there be a follow up book to through infinity?

There will be one more book and a novella for the Woodruffs. Jason’s POV will be told in & beyond… There will be scenes that the reader didn’t get in through infinity. Jason had his own struggles that weren’t shown in through infinity. That was a conscious decision on my part, because I felt that the reader wouldn’t empathize as much with Candice and how lost she felt if they had all of the same knowledge Jason had.

SPOILER ALERT: Candice and Jason are together and they will stay that way, so I can’t imagine another story for them.

12. Do you have any writing rituals?

Nope. Not one. Maybe I need some.

13. What other projects do you have for the New Year?

15. Jason Woodruff, Candice's husband in through infinity, I fell in love with him and the reviews from other readers all say how much they loved him. Did you realize that he was going to mean so much to your readers?

I would say I was hopeful. He’s very open about what he feels, and he’s loyal. Those are characteristics my husband has and I fell in love with him, so I guess I can understand falling in love with Jason. He’s what I would want if what happened to Candice happened to me.

16. You’re a new author, can you give any advice to others who are just starting out?

Hire an editor. Invest in your project, but be realistic about its potential. Be personable and understanding. Everybody has lives, and most blogs and readers are inundated with request to read books. It’s a slow process. Keep writing. Write, write, write, and write some more.

Candice and Jason Woodruff had everything going for them: a strong marriage, the family they’d dreamed of, and successful businesses. When they made their wedding vows, they promised to love each other through infinity and beyond…but Candice doesn’t remember making that vow. Candice doesn’t remember the last eighteen years.
After a medical emergency, Candice awakens to find herself a married mother of four. She’s surrounded by a loving family of strangers, but Candice struggles to claim an identity while learning to be a wife and mother.
Candice is no longer the same woman Jason fell in love with all those years ago. Can they learn to love each other in this new reality?
Through Infinity is one woman’s journey as she rediscovers the love of her husband and children. But will that new found love be strong enough to carry them through infinity and beyond…

through infinity is only .99 cents for a limited time!

About thanks for the memories: 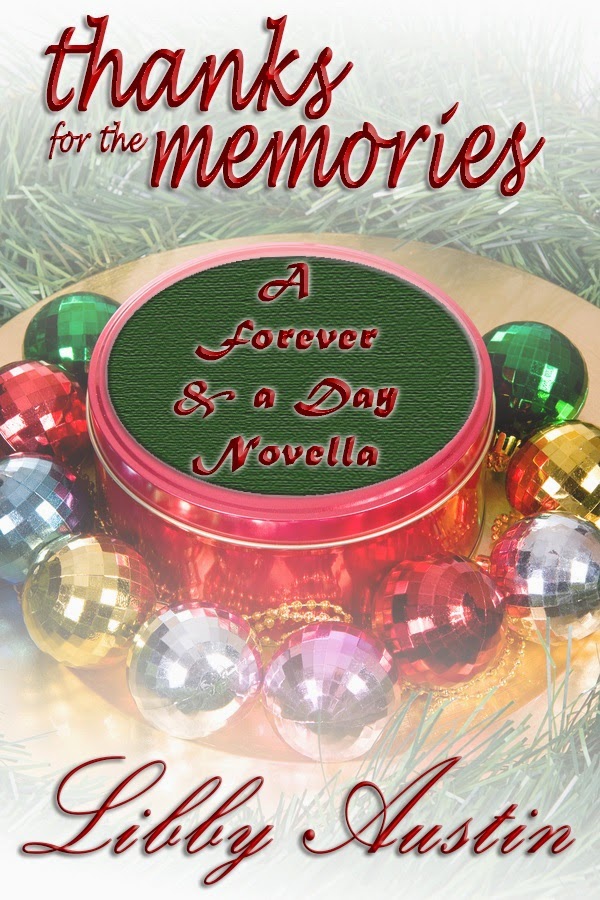 Jason knew Candice's biggest Christmas wish was to remember the past eighteen years. As Thanksgiving approached, Candice retreated further within herself. Jason enlisted the help of their family and friends to grant Candice's wish. Each shared their cherished memories and placed them in a tin. Surprised to find the collection of tins, she couldn’t help but wonder what was inside.

With each memory, Candice felt a little more connected to the life and people she’d forgotten in the wake of her accident. Each one brought a sense of fulfillment and longing. When Christmas day arrived, would Candice be able to say thanks for the memories?

Grab thanks for the memories for FREE at Libby's website!

About the Author: One day some words came to mind, so I wrote them down. Soon the words became sentences, which formed paragraphs, which, in turn, formed chapters. Before long, those words had become a book.When I'm not reading or writing, I'm a wife, mother, and business owner. I've lived on the Gulf, East, and West Coasts, but as a born and raised Southern girl, my favorite will always be the Gulf Coast. There's just no place like home...


This event was organized by
CBB Book Promotions.

Posted by Naughty and Nice Book Blog at 3:46 PM