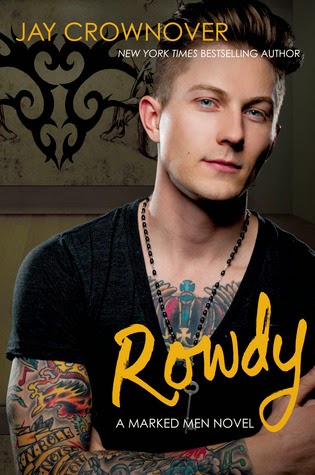 SYNOPSIS:
After the only girl he ever loved told him that he would never be enough, Rowdy St. James knocked the Texas dust off his boots and set out to live up to his nickname. A good ol’ boy looking for good times and good friends, Rowdy refuses to take anything too seriously, especially when it comes to the opposite sex. Burned by love once, he isn’t going to let himself trust a woman again. But that’s before his new co-worker arrives, a ghost from the past who’s suddenly making him question every lesson he ever learned.
Salem Cruz grew up in house with too many rules and too little fun—a world of unhappiness she couldn’t wait to forget. But one nice thing from childhood has stayed with her; the memory of the sweet, blue-eyed boy next door who’d been head over heels in love with her little sister.
Now, fate and an old friend have brought her and Rowdy together, and Salem is determined to show him that once upon a time he picked the wrong sister. A mission that is working perfectly—until the one person that ties them together appears, threatening to tear them apart for good.

Where do I begin?  Jay Crownover created a series that EVERYONE MUST read.  I have to say, the Marked Men is one of my favorites.  These rowdy, arrogant, cocky men, have a soft side underneath their hard rough exterior.  With each book that Jay writes, she has me falling in love with these men all over again.

Rowdy had a rough childhood with losing his mother at a young age, he was forced into the system.  He was placed in a small town in Loveless, Texas with a foster family.  He formed a friendship with the two girls that lived across the street, Poppy and Salem Cruz.

These two girls were his best friends for years, that was until Salem left town when she reached the age of eighteen (18).  Salem left town for her own reasons, but she never stopped to realize the repercussions of her actions and how they affected others... especially, Rowdy.

Rowdy had no family, accept the family that he formed when he met the Marked Men.  Jet, Rule, Nash and Rome were his family.  Phil, Nash's father who passed away, took Rowdy under his wing and gave him the love that he needed and the encouragement to follow his dreams.  When Phil set his plan into motion prior to his passing, none of the Marked Men knew what to expect, they only knew that everything Phil did, he did for a reason.

So the day that Salem received a phone call from Nash offering her a position, it took one click of the mouse for her to look up the shops website, and she knew her decision. ABSOLUTELY, she was heading to Denver.   For years, Salem was a traveling gypsy, roaming from place to place.  Never planting her roots.  But when she saw who was at the shop in Denver, she knew she didn't want to run anymore.  Rather than continue to run from her past, she wanted to run toward her future.  A future with Rowdy.  BUT.... Will Rowdy feel the same way?


It was like staring at everything that I suddenly wanted in the center of a crystal ball telling me that was what my future was supposed to look like. ~ Salem

When Rowdy walked up the stairs at the new shop, he never knew his life was about to change.  He never expected to see Salem standing before him.  The girl who took part of his heart when she left him ten years ago.  Rowdy never recovered from that.  Everyone that Rowdy loved and cared for left him.  Whether it was intentional or by accident.  Losing his mother, left him an orphan, so when Salem, his best friend left him as well, he never wanted to feel that pain again.  He never wanted to open himself up to anyone to allow himself to get hurt again.  When Salem arrived, something in Rowdy changed.  He began to feel eROmotions that he never felt before.  There was something about Salem, that made him want more. Made him want to try.  The two of them needed to be able to address their pasts.  They needed to both open up on how they truly felt about each other.  Will Rowdy forgive Salem for leaving him ten years ago?  Will Rowdy be ready to mend that relationship? Will the two of them be able to move forward?  Can they overcome the obstacles in their way?

"You started all of this, Salem.  You don't get to back away just because you don't like what's hiding in the dark once the light you're shining hits it." ~ Rowdy


"You always saw me Salem.  You understood me when I didn't even get myself.  You were by best friend and then you left. I can't care about someone, attach myself to someone, when they're just going to leave me in the end." ~ Rowdy

This book pulled at the strings of my heart.  Rowdy needed to be loved, he deserved to be loved.  I wanted Salem to love him, I wanted her to stay.  I wanted her to prove to him that love doesn't always hurt and that she wasn't going to leave.  That Rowdy was worth fighting for.  I was routing for the two of them the entire time.  I wanted to see both of them happy. Both, Rowdy and Salem had unsettled feelings from their past, and until they spoke openly about them, they would never be able to move forward.  These two loved hard, and fought hard as well.  The chemistry between the two was off the charts, you could feel the love the two had to each other, as well as the pain that they both endured.

MY FAVORITE QUOTE FROM ROWDY !!!!!

"I've heard you say my name in a lot of ways, Salem.  Gotta say hearing you say it in bed when I'm about to eat you up is probably my favorite to date." ~ Rowdy

I will scream it from the roof tops, if you have not read The Marked Men Series, you do not know what you are missing.  One click this series, because you will fall in love with these tatted up bad boys in a blink of an eye.

Posted by Naughty and Nice Book Blog at 12:10 PM