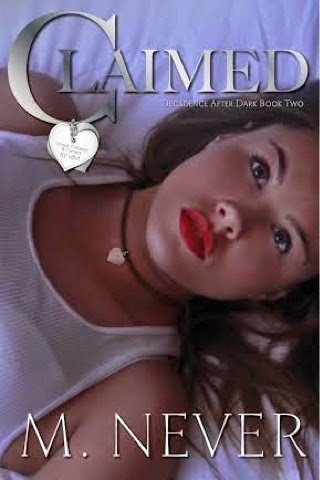 "No matter where you go or who you're with, you'll always be mine."

Ellie Stevens thought she had moved on from the domineering man who abducted her. Now living in Hawaii and following her dreams, no one is going to keep her down. But things aren't always as they seem.

Kayne Rivers reluctantly let Ellie go, but just because she's gone now, doesn't mean she'll be gone forever. She is his, and he won't stop until he's reclaimed her as his own.

Take Me to Church- Hozier

If You Only Knew- Shinedown

Fade Into Me- David Cook

M. NEVER RESIDES IN NEW York City. When she's not researching ways to tie up her characters in compromising positions, you can usually find her at the gym kicking the crap out of a punching bag, or eating at some new trendy restaurant.

She has a dependence on sushi and a fetish for boots. Fall is her favorite season.

She is surrounded by family and friends she wouldn't trade for the world and is a little in love with her readers. The more the merrier. So make sure to say hi!

Posted by Naughty and Nice Book Blog at 9:42 PM