"LOST IN DISTRACTION" by BJ HARVEY 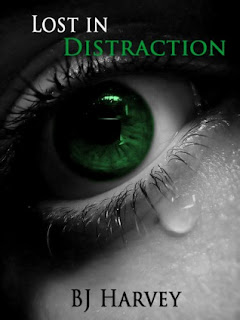 In the three years after a horrible crime claimed her family, Elise Halliwell has been alone, shut off from the world in a self-imposed emotional exile. She goes through the motions, finishes high school and moves across country to start college and begin the next step in her pre-destined life.

But her exile is dramatically cut short by the entrance of a dark haired, blue-eyed, smirking man who shakes her to the core, achieving what everyone else before him has failed to do, he makes her feel again.

As much as he wishes it were different, fate has not brought Braxton James into Elise’s life, or has it. Brax has to keep her safe from people in her life who have ulterior motives and may want to hurt her.

Elise has no idea the threat she faces, and Brax wants to make sure it stays that way. But as Brax struggles with getting close to her, he begins to live a lie. Unable to resist the pull that is Elise’s bright green eyes, infectious giggle, and loving heart, he finds it impossible to stay away, so the double life of being Elise’s boyfriend and keeping her safe begins.

Full of twists and turns, danger and revelations that no-one could predict, you won’t be the only one lost in distraction.

While I’m waiting, I receive a text message from Elle. I open it up and soon see a photo of Elle wearing the hottest corset top I’ve ever seen, stopping me in my tracks. One photo and I’m instantly turned on—that is what she does to me. Damn, I’m a lucky man. I text her back to let her know that.

Brax: Damn, woman, what are you trying to do to me?


Elle: Just reminding you what you left behind at home this afternoon.


Brax: Believe me, babe, I’m painfully aware of what I walked away from.


Elle: Are you sure about that, baby? Maybe I need to show you…


Brax: Grrrr, you are such a tease. I’m definitely taking care of this when I get home.


Brax: Oh, don’t worry. This is a promise I’m planning to make good on, over and over again….


Elle: Dammit! Now I have to buy these panties, too.


My smile is huge when I read that last text. I love this little game of ours. Shit, that girl can drive me crazy. Now I have to think about something totally unsexy to calm my body down. What doesn’t help is that I can’t get that image of Elle in a corset out of my damn mind.


That photo is definitely being saved on my phone.
GET YOUR COPY FROM AMAZON TODAY !!!!  LOST IN DISTRACTION IS LIVE !!
Posted by Naughty and Nice Book Blog at 7:11 PM