His Southern Temptation by Robin Covington 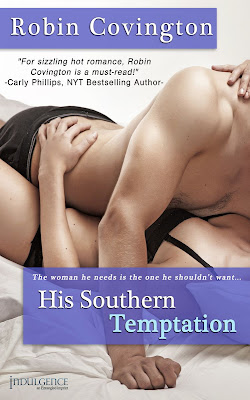 Some women are bad. Some women are a bad idea. The best ones are both...
A former Black Ops assassin, “Lucky” Landon has had more near-misses than a man should ever have. Now he’s out of that business and settling into the simple life in his small hometown. So the last thing he ever expected was to end up at gunpoint. Or that the woman holding the gun would be his best friend’s little sister and Lucky’s on-again/off-again lover.
Taylor Elliott is Trouble, and she likes it that way. And seeing Lucky again? Well, he’s been her dirty little secret for the past few years and everyone knows that secrets in a small town are almost impossible to keep. But Taylor has bigger problems on her plate. Like the local mob boss who wants her dead.
And right now the only thing standing between Trouble and disaster is a hottie named Lucky...

Holy smokiness! T his book is hot!  I can just feel the attraction, heat and sparks coming off these two characters!  Robin Covington does a wonderful job captivating me throughout the entire book.  It was nice and steamy, always filled with some sort of drama.  It was swoon-worthy and at some parts heartbreaking.

Taylor Elliot left her hometown and started a new life for herself all the way across the country.  Now she is back home for a few weeks, wrapping up a few family matters, getting her money, and going back to start the business she has been dreaming of.  After certain situations occur, she has come out of her shell and has become very open and carefree.

Lucky left his job as a “Marine” to come home and help his father settle his debt on their family farm.  With the idea of wanting to leave his demons behind, he believes that the farm will provide him a new life.  The new Lucky back home is different, he wants to settle down and he doesn’t want to be unsure of his life.

Both, Lucky and Taylor were never ones to keep relationships, which is why flings seemed so easy to them. They could always satisfy their fix, no strings attached and move on.  Things take a turn when they have to stay at the same house.  Old feelings surface and their hot and heavy romance picks up where they last left off.  Their romance must remain a secret or her brother and Lucky’s best friend, Teague, will end it for both of them.  However, lines start to cross and fun starts to mean something more; scaring them both.

As much as Lucky wants to stay away from trouble, trouble seems to always find Lucky.  Taylor finds herself going behind Lucky’s back so she can get the inside scoop on one of his cases.  By doing so, she has caught the eye of a big time mob boss.  She finds herself in a whole lot of trouble and only one person can help save her.  Lucky does everything he possibly can to protect her, even if it means giving everything up.

Will Taylor run away like she always does? Or will she finally stay to find out where her feelings will take her?  Is he really serious about settling down, or is this a usual fluke thing?  Is she worth giving everything up for?  Will they both be able to put their insecurities aside and let their feelings take them somewhere?

I really enjoyed this book, a lot.  I only wished it was a little bit longer.  I was left wanting more of Taylor and Lucky, I can’t seem to get enough of them!  Job well done!

I received an ARC from Entangled Publishing for my honest review.

GET YOUR COPY TODAY OF
"HIS SOUTHERN TEMPTATION"
FROM AMAZON

Posted by Naughty and Nice Book Blog at 10:28 AM