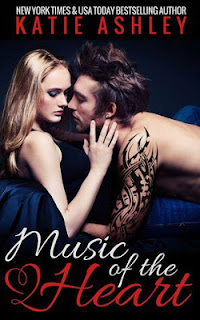 For Abby Renard, the plan was supposed to be simple—join her brothers’ band on the last leg of their summer tour and decide if she’s finally ready for the limelight by becoming its fourth member. Of course, she never imagined stumbling onto the wrong tour bus at Rock Nation would accidentally land her in the bed of Jake Slater, the notorious womanizing lead singer of Runaway Train. When he mistakes her for one of his groupie’s, Abby quickly lets him know she sure as hell isn't in his bed on purpose.

Jake Slater never imagined the angel who fell into his bed would resist his charms by promptly kneeing him in the balls. Of course, the fact she seems like a prissy choir girl makes her anything but his type. So he is more than surprised when after betting Abby she wouldn’t last a week on their tour bus, she is more than willing to prove him wrong. But as Jake’s personal life begins to implode around him, he finds an unlikely ally in Abby. He’s never met a woman he can talk to, joke with, or most importantly make music with.

As the week starts comes to a close, neither Abby nor Jake is ready to let go. Can a sweetheart Country songstress and a bad boy of Rock N Roll actually have a future together?

I had been waiting patiently for the release of “Music of the Heart” by Katie Ashley and once again she did not let me down. I LOVED Aidan Fitzgerald from The Proposition and The Proposal, and I didn’t think she could top Aidan’s arrogance in this book, oh how I was mistaken.  Music of the Heart is filled with lust, love and heartbreak.

In Music of the Heart, you are introduced to Abby, a 21 year old with 3 older brothers who are in a band, Jacob’s Ladder.  Abby’s parents were missionaries and her family has traveled abroad. Abby may be young and innocent, however she is not naïve.  Abby has the opportunity to replace her brother as the lead singer when he decides to leave the band to get married and join the seminary.  Abby is meeting up with her brothers while they are on tour and just wrapped up their performance at Rock Nation a HUGE music festival.  Abby thought the roadie was taking her to Jacob’s Ladder’s tour bus, but she was taken to Jake Slater’s tour bus…  After thinking she was getting a warm welcome from her brother Gabe, she ended up stumbling into the bed of Jake Slater, the lead singer of Runaway Train.

Jake Slater, is an egotistical, cocky, arrogant rock star who is a total manwhore.  Jake is used to getting what he wants and is never told  "no".  From the moment Jake opened his mouth, he captured my heart and I fell in love with him.

Jake thought he had it all and was living the life of a rock star, until one day everything changed.  He met Abby.  Quickly Jake saw something in Abby that he was drawn to.  Jake realizes that Abby isn't your typical girl and she surely is NOT a groupie.  Abby is pure, angelic, innocent and a virgin.  Don’t let Abby’s innocence fool you, she is a fire cracker and does not take anything from anybody.  With Jake's reputation, will Abby even give him a chance?


Jake doesn’t think Abby could last a week on their bus with a rowdy group of rockers…  Abby will not back to a bet and takes Jake up on his offer.

While reading Music of the Heart, I instantly felt the connection between Jake and Abby.  I enjoyed seeing the relationships that Abby developed with Jake’s band mates, AJ, Rhys and Brayden.  It felt as though I was on the tour bus watching all of this unfold.
Throughout the book, I wanted to smack Jake in the back of the head quite a number of times.   Some of the things he did and some of the things he said to Abby, I found disgusting, but at the same time, I found him quite entertaining.  Despite all of Jake’s flaws, he made you fall in love with him.  Abby is a very forgiving person, and I have to say that I don’t think I would have been so forgiving, but love makes you do things that you wouldn’t usually do.  Jake and Abby both are very inexperienced with relationships.  Jake does his best to push Abby away, fearing that Abby deserves better than what he can offer.  No matter what Jake dishes out, Abby still sees the good in him and wants to see past Jake's flaws.  Abby sees that there is a great guy buried deep, deep down and she will do her best to break down those walls.

Katie has developed great characters in Music of the Heart. I didn’t just love getting to know Abby and Jake, I enjoyed getting to know the entire band, AJ, Rhys and Brayden.

Is love at first sight possible?  Is it possible that opposites can attract? Can a sweetheart country songstress and a bad boy rocker actually have a future together? You will have to read Music of the Heart to find out!!!!


Music of the Heart is a book that I could read over and over again.  I look forward to seeing what Katie does with the rest of the band…

I give this book a 5 star rating…


Music of the Heart by Katie Ashley Playlist:
Abby sings an acoustic guitar version for the boy of Adele's Someone Like You.
Abby gives Jake a run for his money by knowing how to play AC/DC's Highway to Hell
AJ and Abby dance to the La Tropa Vallenata version of Los Caminos de la Vida
AJ and Abby sing a duet to Kenny Rogers and Dolly Parton's Islands in the Stream
Abby proves Jake wrong singing Madonna's Like a Virgin
Abby tries to get Jake to keep song writing by mentioning Eric Clapton's Tears in Heaven
Then Alter Bridge's In Loving Memory
And Dolly Parton's I Will Always Love You
And singing in codes like in the 60's with The Byrds Mr. Tambourine Man
Abby is dancing to Michael Jackson's Beat It while cleaning the bus when Jake interrupts her!
Jake helps Abby prepare for her duet with Garrett to Jason Aldean and Kelly Clarkson's Don't You Want To Stay
Jake and Abby hang out together and jam to duets like Conway Twitty and Loretta Lynn's Louisiana Woman, Mississippi Man
Ozzy Osbourne and Lita Ford's Close My Eyes Forever
For her first song with her brothers, the boys of Jacob's Ladder, Abby sings a cover of The Band Perry's If I Die Young
At his sister, Allison's, Sweet Sixteen, Jake sings Chrissy Hynde's Forever Young for her.
At the Sweet Sixteen, AJ and Abby dance to Paula Rubio's Dame Otro Tequila to show how the kids how it's done
One of the most important song is Aerosmith's Angel that Jake sings to Abby on stage
Susan asks Abby to sing the old hymn Angel Band for her.
With her brothers, Abby sings Pink's Beam Me Up at Susan's Benefit Concert
She also sings Pink's Great Escape, which she dedicates to Jake
At the benefit concert, Jake and Abby do a duet to Tim McGraw and Faith Hill's I Need You
They also sing Paul McDonald and Nikki Reed's All I Ever Needed


Get your copy today:
MUSIC OF THE HEART - AMAZON LINK

Posted by Naughty and Nice Book Blog at 3:56 PM