BEFORE YOU GO by CLARE JAMES 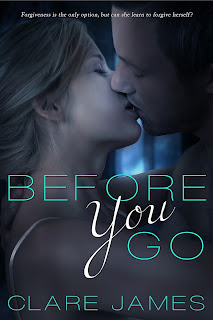 Paralyzed by the past and terrified of the future, Tabitha Kelly is broken.

After a public sex scandal at her college, Tabby moves to a new city with a new school, convinced she can start over. But she soon realizes the changes are not enough. Tabby must take action to help her heal and move on from the past.
And though it sounds crazy, she believes a one-night stand is the best way to take back what’s hers. If she can choose where, when, and most importantly, who … maybe she can regain control.

First, she needs a willing participant.
She finds more than that when she meets Noah Adler.

Unfortunately, she can’t go through with it. And when she tries to forget about the plan—and the guy—it becomes impossible.

Noah quickly weaves his way into her new life and her heart. But as he comes dangerously close to discovering her secret, Tabby’s at risk of losing it all.

"Before You Go" is Clare James' debut novel.  I have to say that I thoroughly enjoyed this book.

Tabitha "Tabby" thought she had it all.  She was a popular dancer, had tons of friends and what she thought was the perfect boyfriend, until one night at a college party everything changed.  Tabby became the subject of a public sex scandal at her college in Illinois.  The sex scandal has left Tabby broken.  Her father and her step mother feel is it best for Tabby to start over, to have a new beginning in a new city.  Tabby has convinced herself that by having a one night stand, she will be able to take back control of her life.

Tabby heads out to the bar and sets her sights on an attractive guy at the end of the bar.  After a few drinks, Tabby has the courage to approach the guy and they end up hanging out the rest of the night without even exchanging names.  Tabby felt by exchanging names, she would personalize the one night stand.  Tabby only wanted one thing, sex, and sex that she was in control of.

Once back at Tabby's apartment, she realizes that she can not go through with it and asks for him to leave.

"The name is Noah.  You know, in case you're thinking about me later.  Good to have a name with a face.  Don't you think?"

Noah is attracted to Tabby, that much is clear.  Noah wants to know more about Tabby, however Tabby is not looking for a romantic relationship, but she agrees on a friendship.  Noah is persistent and overtime, Tabby can not deny her feelings for Noah.  Noah knows that Tabby is keeping something from him but he never pushes her.  Noah was perfect in Tabby's eyes, but she soon discovers that Noah has a past of his own.  Can two people who both have a past, help each other heal?
I enjoyed watching Tabby and Noah's relationship grow.  Noah, oh Noah…  Noah is a complete sweetheart. The gentle way he helps Tabby overcome her intimacy issues.  Noah is amazingly patient with Tabby and he helps her find and rebuild herself.
Noah is such a likable character.  Tabby and Noah had a great connection.

Tabby had AMAZING people in her life, who were very supportive.  I enjoyed getting to know the sub-characters as well.  The author makes you have an immediate connection with them.  Jules is Tabby's friend that she meets at school.  Jules is the type of friend that every girl should have in their life.  Jules was always there for Tabby, whether it was just a shoulder to lean on or just to talk.  Jules never judged Tabby for her past, because like everyone, Jules had a past of her own.  Think about it…  Who doesn't have a past, whether it's characters in a novel or in real life? We all do…..

"It's time to move forward, Tabby.  Time for you to build the life you want to live and stop being a victim."


There are real issues in this book, such as sexual assault, suicide, depression and finding a way to recover. I think the author did a fabulous job by bring attention to these issues.

This 4 star review was prepared by Heather.
I was provided an ARC by the author for an honest review.

GET "BEFORE YOU GO" FROM AMAZON

Posted by Naughty and Nice Book Blog at 9:42 AM