Tessa Ever After by Brighton Walsh 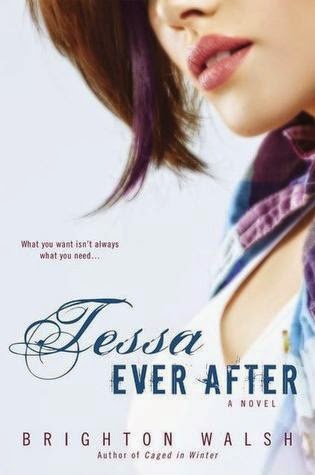 In this grippingly emotional New Adult novel from the author of Caged in Winter, what you want isn’t always what you need…Jason’s been living (and loving) the rich playboy lifestyle for five years, but now his parents are pressuring him to get involved in the family business. The last thing he wants is another obligation, but when his best friend moves out of state and asks Jason to look after his sister, he can’t just say no.Tessa had to grow up way too soon. After dealing with the aftermath of her parents’ deaths, then becoming a teenage mom, she knows the meaning of responsibility. Which is why, at twenty-two, she’s looking for so much more than a party boy. She’s looking for someone who can stand by her and her daughter…forever.A relationship between them is doomed from the start, but who says they can’t have a little fun? But as Jason gets closer to Tessa—and her daughter—fun starts to turn into something else… Something Jason’s not sure he’s ready for.

Tessa is having a hard time adjusting to raising Haley since her brother, Cade, moved away. She often thinks about how much easier things would be if she had someone to help out, but Tess refuses to fall for a bad boy again. Nope, she’s been there done that! She wants someone stable that is ready for a built in family.

Jason has a reputation with the ladies. He’s in and out. After Cade moved away Jason has started checking in on Tessa & Haley. During this time his feelings have grown for Tess. He feels guilty about his feelings because he knows he shouldn’t have them for his best friends little sister. Jason has tried to “distract” himself from thinking about Tessa with other women but none of them measure up. But what happens when Jason see’s Tessa on a date? How does Tessa feel when she sees a girl flirting with Jason while she is on her date? Do they decide to just have a little fun or do they both let their walls down and go for it? Does he let his parent’s ultimatum break what they have? Well you are just going to have to read it for yourself because the chemistry between them is off the charts!

Jason also gets very attached to Haley! It is so cute when he reads & plays dress up with her! All dads should be like that with their daughters. And the pink post it notes.. they will have you swooning!

Overall this was a great book/series! You get to hear from Cade, Winter, & Adam in this book as well.

Posted by Naughty and Nice Book Blog at 1:02 PM