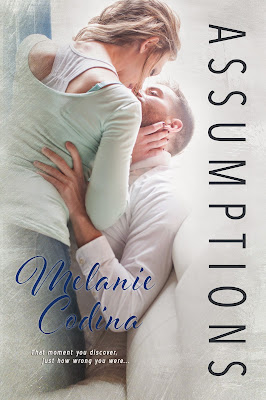 What happens when a girl set on playing by the rules …

Leeann Bradley is a college graduate who has achieved many of her personal goals, all because she follows the rules she’s set for herself. It’s simple. You work hard, enjoy life, surround yourself with friends and family, avoid jumping to conclusions … and oh yeah, don’t date jocks. These rules have worked well and have taken her down the path she wants in life. So what’s a girl to do when temptation, in the form of a sexy college soccer player, is placed right in the middle of that path? Deciding when to break the rules has never been easier for Leeann. But when assumptions are made, and more than just the rules are broken … will she be able to find her way down that path again? And what happens when it’s no longer the path she’s meant to take?

Finds a guy worth breaking them for …

Until now, Jonathan Baxter had one primary focus in his life, soccer. All decisions made, have been based on how it could affect his ability to play soccer. His grades, his choice of college, any type of extracurricular activities, were all carefully assessed. All of it has made playing college soccer possible. But when an injury sidelines him for the foreseeable future, and jeopardizes his dreams, he has to work even harder than before. Rehabilitating his injury becomes his primary objective. Until he meets Leeann, a physical therapy assistant whose touch has the ability to make him lose focus. She has him thinking there could be more in his life—in his future—than just soccer. So what’s Jonathan to do when Leeann assumes he’s just like every other jock out there? He has to prove her assumptions wrong.


Have you ever had a book on your kindle that has been there for a while and when you finally have a chance to read it, you want to smack yourself on the forehead and go...... "Why the hell did I wait so long to read this book?" That is exactly what I did the other day after finishing Assumptions.

I am a HUGE fan of Melanie Codina's work. I fell in love with the characters she created in The Real Love Series. Assumptions is a spin-off of this series, where we get Gillian's son, Jonathan's story.  You can read Assumptions and follow the storyline without feeling like you're missing anything.  Melanie did a great job filling you in details that you needed to understand Jonathan's family dynamics.  Why he is the way he is. Why his relationship with his father is strained. Melanie blends the story perfectly.

From the beginning of the book, I was hooked. I wanted to know Jonathan and Leeann (a/k/a Lee) more. Jonathan is a junior in college when he sustains an injury to his knee, an injury that could end sideline him for good. When Jonathan heard the infamous POP, he knew immediately what it meant. It's the sound that no athlete ever wants to hear.

From the stands, Leeann watched as Jonathan hit the ground in pain. Her being a physical therapy assistant, she knew the rehabilitation that a knee injury could cause. Never did she imagine that the hot soccer player would end up being one of her patients.

While Lee is rehabilitating Jonathan's knee, things begin to develop between the two of them. She may not have planned to have feelings for the sexy soccer player, but Jonathan had other plans in mind. Jonathan knew she was different from the other girls he had been with. He could joke with her. He enjoyed spending time with her. Little by little, Jonathan knocked down the wall that Lee had built, until Lee assumes the worst.

We all know that ASSUMPTIONS can get the best of us.  We all have assumed things. Sometimes the assumptions are spot on....  Sometimes they are completely wrong.  When assumptions are made, people can be hurt. Relationships can be destroyed.  Will their relationship be strong enough to get past it?  Can forgiveness be given for assuming the worst? I guess you will have to read it to see.....

Lets talk about Jonathan.  Boy oh boy, did I fall HARD. Jonathan was so swoon worthy, he deserved an Oscar for his performance. He always knew the right things to say at the right time. You could tell that he meant every word that he said, that he wasn't a bullshitter.  You could feel the love he had for Lee. You could see him falling in love with her. I was routing for him the entire time. Jonathan was simply amazing in this book. If only every 21/22 year old acted like he did, there would be a lot of happy 21/22 year old women.

Lee had concerns that every woman would have. Is he a player? Is he the stereotypical athlete? Am I just a conquest? Does he mean what he says? The bantering between the two of them is hilarious. The two of them hit it off immediately. At times I felt as if I was waiting for the floor to fall out from underneath of them. Things were going smooth. I knew something was going to happen and I held my breath as I read.

ASSUMPTIONS is a great book. A book that will leave you wanting more. A book that will have you smiling knowing that their story could very well happen to anyone.  I will now wait patiently for the release of more in this series.  KUDOS to Melanie for nailing this story....

“So, Leeann. I was thinking of asking you out on a date, but figured I should make sure there wasn’t a Mr. Leeann in the picture,” I stated matter-of-factly, taking another bite of my salad. Rather than respond right away, she gave me an amused look. I really liked that I amused her. It did great things for my ego.

I nodded, liking my choice of words. “Yeah. You know, a member of the opposite sex who you’ve attached yourself to. Maybe even have Cobb salads with. Although I’m sure there would be other things you do with a Mr. Leeann, but we don’t need to bring those up. I prefer to just think of you eating Cobb salads with him.”

She tried to conceal a snort by covering her mouth with a napkin, but I caught it. It was cute as hell. That unruly dick of mine began to make himself known again. I was actually surprised it had taken that long for him to realize she was within a five-foot radius. Maybe the temporary jolt of pain I got almost falling allowed for the delayed response. Fortunately, I’d taken Leeann’s advice from the other day and worn shorts that were a little more concealing.

When she removed the napkin, she smiled broadly. “Well, there really isn’t anyone else I eat Cobb salads with. Except you, of course. But—”

I interrupted her, “Perfect! That makes me your Mr. Leeann. I can totally be that for you. Except I could definitely see us doing more than eating Cobb salads together.”

Now she was giggling, and I couldn’t help but watch her as that simple sound exploded in my ears. It swirled around me, making me want more. When she slowed down the giggling, she asked, “So you can see me doing more with you, huh?”

My hands were clasped together, and I rested my elbows on the table, leaning forward a little. I lowered my voice and said, “Oh yeah.” The husky tone caught her attention, and she leaned forward in response. So I continued, “I could definitely see us doing more than eating Cobb salads. We could always try the Caesar, or even a Greek salad together. How do you feel about pizza?”

Leeann burst out laughing, and I couldn’t control every part of my body that responded without delay. There I was, joking with this sexy woman, dick at full attention, and all I could do was stare … and plan.

I needed to make a plan that involved making her laugh like that for me … every damn day.

Melanie is an amazing mother of four, an awesome and tolerant wife to one, and nurse to many. If you don't believe her, just ask anyone in her family, they know what to say. She is also a devoted chauffeur, the keeper of missing socks, a genius according to a seven year old, the coolest soccer uniform coordinator according to a thirteen year old, and the best damn mac-n-cheese-with-cut-up-hot-dog maker in the whole world. Well that last title isn't really official, but it's still pretty cool to be called it.

When not being ordered around by any of the kids, you can find her with her nose in a book or on the sideline of a soccer game cheering on one team or another. But that's mostly because she has a thing for the coach. When not doing all of the above, you can find her obsessed with a group of fictional characters all vying for a spot on the page of whatever she's working on. It's a fun and crazy life to lead, but she wouldn't have it any other way.