Playing for Keeps (The Scarlet Series, Book #1) by Toria Lyon 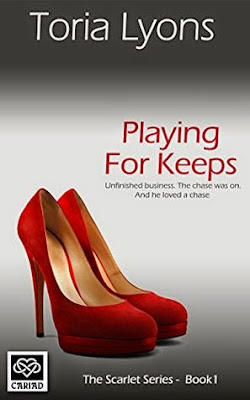 Unfinished business. The chase was on. And he loved a chase. Undeniably sexy, book one in the gripping and racy Scarlet series is guaranteed to satisfy. Defiantly single, career-driven Sarah Evans has a secret love for rugby – but has no time for sportsmen lotharios who stray away. A blast from the past sends unexpected sparks flying in her direction when she runs into Tom Murray; rugby player, tycoon, and the ultimate Casanova. She resolves to stay away from him despite the obvious attraction, but he can’t keep away from her – he wants her and nothing’s going to get in his way. While they can’t keep their hands off each other, Sarah doesn’t want a relationship, especially not one with a rugby player with a playboy reputation. Sticking to her guns, she knows he’ll move on sooner or later, and she just has to defend her heart from Tom’s remorseless attacks. But for him, this isn’t a game; he wants her in ways he doesn’t understand, and needs to convince Sarah the same. Can Tom convince her he really is playing for keeps?


Sarah Evans is a strong independent woman who loves rugby and had her heart broken in College. Tom Murray is a rugby player who has been searching for the girl who got away all those years ago.
I have mixed feelings on this book. I fell in love with the characters and will admit they have off the chart chemistry; however, I feel like we didn’t get to see their relationship develop. Almost every important scene where you felt you were finally going to see the relationship go to the next level I was left disappointed with another sex scene. Don’t get me wrong the sex scenes were hot, but I felt like one minute Sarah was trying to guard herself from Tom and the next they were in a full blown relationship and we missed everything in between.


I did enjoy the fact that these two had previously known each other and that we did get the backstory on what happened all those years ago and as a girl it was hard not to fall for Tom Murray. He was fierce and wasn’t going to give up until he got what he wanted. I love seeing a guy who doesn’t care what others think when it comes to loving a girl. I will admit I know nothing about rugby and that they do use a lot of terms for the game throughout the book, so I was a bit confused in those areas but it doesn’t hurt the story not understanding what they are talking about when it comes to the game. The other warning I would give is the story is set in the UK so the terms that are used are not common terms we are used to, but you get used to it as you read.


I do plan on reading the rest of the series to see the other characters that we met throughout this story get their happily ever after I just would have liked to get a little more of the relationship built up prior to everything else. Overall, I did enjoy this book.


This review was prepared by our guest reviewer, Michele Faville. An ARC was received in exchange for an honest review.
Posted by Naughty and Nice Book Blog at 3:00 AM