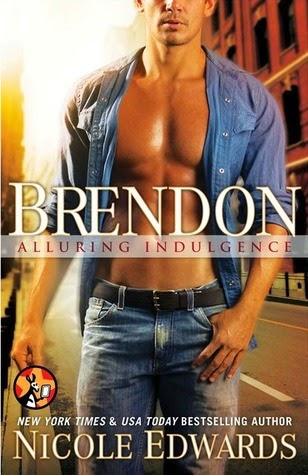 Brendon Walker’s life was altered drastically when his twin brother fell in love. Coming to grips with his new reality hasn’t been an easy road, and he fears he’s all but given up.

Cheyenne Montgomery is familiar with the spotlight, and she’s familiar with fame. What she isn’t familiar with is the incredible lure of the sexy Walker brother who makes her heart beat wildly. Seeing him spiral out of control has been tough on her. So what will it take for Cheyenne to convince him that change can be a good thing?

I will admit I am a huge fan of family series, I love that you get more invested in the family with each book.  Then I love that you get an ending with each book then you get the next and you continue the journey with them.  Nicole Edwards’ Alluring Indulgence Series with the Walker Clan is by far one of the best out there.  Ever one was a 5 Star for me and leading up to Brendon I was anticipating being pretty annoyed with him and his ways.  I wanted to see if he would grow and boy did he.

I do not like to delve into previous books in reviews but on this one I don't think you can ignore what lead up to Brendon's book without giving it the credit it deserves on his evolvement into the man he is at the end of the book.  In earlier books we know Brendon and Braydon shared EVERYTHING, including their women.  When Brendon realized that Braydon was falling in love with Jessie he went a little crazy and cause many issues with Braydon, Jessie and himself.  Obviously he learned and backed off to let them be together but in doing so his life took a downward spiral.  Until Brendon's book I didn't realize this downward spiral had a lot more to do with Cheyenne and their lack of a relationship then with Braydon moving on with his life.  I knew Brendon wasn't in love with Jessie and I knew Jessie wasn't the issue but I did believe 90% of his issue was with him feeling as thought he was losing his bond with Braydon.

Now moving onto the here and now we learn a lot more of Brendon's thoughts and how he didn't realize he had dreams of having what his brothers all had and he wanted that with Cheyenne.  But when he first met her and he proposed taking her to bed and sharing her with Braydon she turned him down on the spot.  She will not be shared with anyone and as much as she wanted Brendon she wanted him and no one else.  She wanted someone to love her enough not to want anyone near her, just as she wouldn't want to share him.  He is not used to being turned down by anyone and he knew right away before he made his proposition she was different and while he didn't want to share her with Braydon he did because that is all he has known his whole life.  It's him and Braydon against the world and it worked well for them until they both fell in love.

Growing up Cheyenne had a hard life outside of the love she had from her grandparents.  Her parents are down right selfish and mean and they never wanted her until they could get something from her and even then they were awful to her.  She always dreamed of being a singer and her grandmother pushed her to pursue her dreams.  Then one night in a dive bar performing she meets Travis Walker and literally her life changes.  He not only saves her from a drunk patron, he introduces her to a producer and they build what is to be a life-long friendship.  She is now a famous country singer with a big heart and has decided it is time for her to make some roots.  She chooses Coyote Ridge to be where her grandparents were from.  She buys a nice home that needs a lot of rehab and hires Kylie, Travis's wife.

At a family welcome home/housewarming party Cheyenne and Brendon both seem to decide it is time to start their friendship and move past their prior arguments.  They both know realize how attracted they are to each other and over the next week decide on going out on a date.  Little did they know that within a week or two they'd be living together because Cheyenne has a crazed stalker and Brendon is going to protect her.  We watch them grow as a couple and we watch Brendon grow as a person and when he does he does it with flying colors.  He figures out what he wants and he does everything in his power to get it.

This is a true love story one that has been built over a few years with many bumps in the road but in the end as with all of the Walker men they prove the journey is well worth the ride.

And the epilogue is one of the best I've read, the conclusion, or so we thought, to the Walker Family.

This review was prepared by guest reviewer, Heather McLaughlin.  An ARC was received in exchange for an honest review.

Posted by Naughty and Nice Book Blog at 4:34 PM