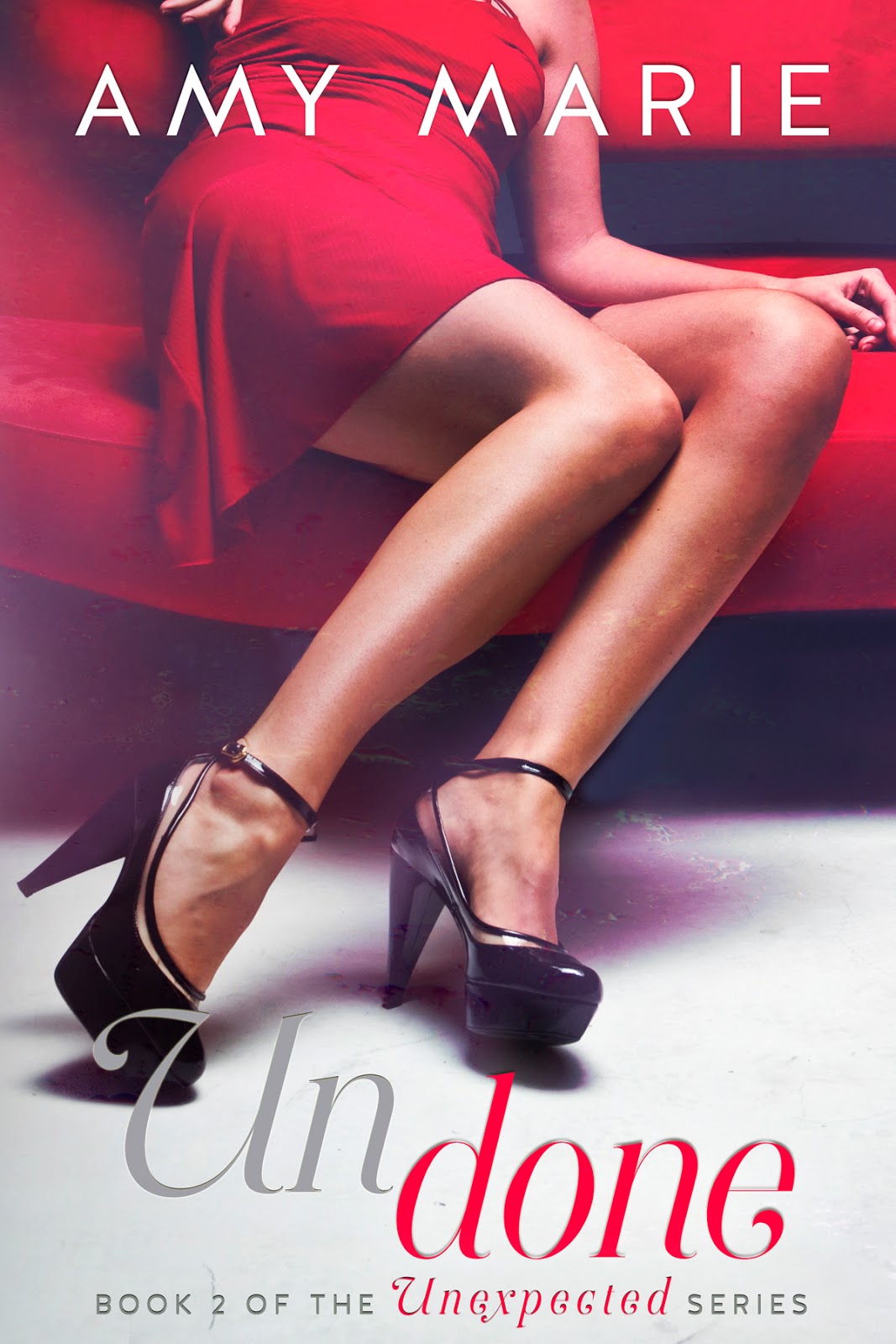 Trent Decker’s life was turned upside down when Alex, his longtime girlfriend, abandoned him and their newborn son. Trying to put order back in his chaotic life, he never expects to fall for his sister’s best friend, Noelle. When another man seems to be stealing her heart, the years of holding his feelings for her inside come out. He lays it all on the line, hoping she chooses him. Noelle’s indecisiveness and an unanticipated visit from his past, causes him to take a step back and focus on making things right for his son, but can he stay away?

Noelle Grant prides herself on her life being in perfect order: a great job, great friends and the occasional fling to satisfy her needs. When her latest conquest, Jace, crashes into her life, she believes he may be the one to keep for more than just a night or two. That is until Trent, her best friend’s sexy, little brother, makes his feelings known and turns her structured world inside out. Exploring her feelings for both men adds complications and when Trent starts to pull away she believes Jace is what she needs. But is he what she wants?

Will Noelle stay with the safer choice or will she risk everything for the one who makes her come completely undone?


“Stop holding on to what you think is easy. Love is hard, but so worth it.”


I have been anxiously waiting for this book since Unexpected ended and I am proud to say that Amy did a fantastic job with it. Amy does a great job dealing with this love triangle and the situations she throws in there make it different than any others. There’s enough angst and drama that’s it’s not overdone and will keep you reading till you’re done with it. And the chemistry in the book, holy hot damn..

“Are you wearing panties, Noe?” ~ Trent

When Alex left Trent and their son without a word, his life was changed drastically; trying to raise a newborn as well as running his own company. Noelle has been a lifesaver and has helped with Jason from time to time. For several years he has been secretly harboring feelings for her, but has never acted on it. The more he sees her with his son, the more his feelings for her grows. Erin is aware of his feelings for Noelle and is sworn to secrecy even though she is her best friend. But Erin does what she can to secretly push his secret out. Instead of acting on his feelings he filled his life with meaningless women. When Trent finally has the courage to fight for Noelle, it might be too late.

“Noelle holds the key to my happiness and I love her, Erin. I need her to know that.” ~ Trent

Noelle is independent, wild, outgoing, free-spirited, vocal and one of the most loyal friends out there. When it comes to men, she doesn’t do relationships or anything long term. But one meeting with Jace, she is instantly drawn to him. One kiss has her wanting more. And Jace wants it just as much as she does.

“You are both going to have to take the blindfolds off at the same time and see what the hell is in front of you.” ~ Erin

When Noelle realizes that Trent has feelings for her, she is taken back by the news. She’s always felt something for him, but has never wanted to admit anything herself. With two men wanting to be with her and Noelle having two different types of feelings for them, she feels that she needs to give them the equal opportunity to see which one she wants to be with. The men fight to have her attention and do anything possible. She decides she will date both of them to see which path she will choose. Jace is the safe choice for her. A fresh start. But she has always been drawn to Trent. Even when she says no, her body always says yes.

“Him or me, Noe?” “Seems like you need to figure some things out.”~ Jace

Just when we think Noelle has it figured out, someone from the past reappears to throw everyone’s life off kilter. Sacrifices get made, feelings get put aside and lives get changed. What will happen to everyone? Who will Noelle end up choosing? And how will everyone be affected by this decision? Will friendships still remain intact? Will it be too late for everyone to find happiness?

To find out you’re going to have to read the book. I don' want to spoil it for anyone. I highly recommend this book to everyone. This book can be read as a standalone, but to get a better handle of everyone's back story, you should read Unexpected first. Great job, Amy. I look forward to reading Hadley and Ryder’s story.

I was given an advanced copy for my honest review.
This review was done by Jenn.


“You need to move back more. I can only think with my lady parts if you are that close.”

He lets out a full blown laugh but moves back.

“We don’t just have us to think about, Trent. If we get together and something happens it can affect my friendship with Erin, my dinners with your family, time with Jason and your nieces and nephews. What if this doesn’t work out?”

“Noelle, please stop with the ‘what ifs’?” His frustration is starting to surface. “Can you honestly tell me that you would regret it more if we tried and it didn’t work than if we didn’t see this through at all?”

“I don’t know and I think that’s what the problem is. I need to think this through and figure all that out.” Standing up I grab my glass of wine and empty it. “I need to go.”

He follows me towards the door but grabs me just before I reach it. “You promise to think about it? Do that entire ‘pro and con’ list shit that you like to do? Weigh all the options, Noe, because I have. I would rather you and I try it out and promise to stay friends if it doesn’t than the alternative.”

“I promise to give some serious thought to this. You know I don’t do long term and I know you don’t want the short term version so just let me think,” I plead.

“Go on a date with me then. Just one. You gave Jace today, I deserve the same don’t I?” He slides his hand down my arm and clasps my fingers around his.

“Okay. Call me tomorrow and we can make plans.” I agree standing as high as my toes will allow and kiss him on the cheek. “Bye, Trent. We’ll talk tomorrow.”

“Bye, Noe.” He opens the door and grabbing my face he places the gentlest of kisses on my forehead.

Pulling my bag off my shoulder, I dig around for my keys. I don’t notice that Jace is outside leaning on his car.

“You know the window is open?” He calls out pointing towards Trent’s house.
I turn around and find the blinds pushed to the side so you can see directly into the house.

“You don’t have to explain it to me, Noelle. I saw you push him away.” He shoves off from his car and meets me in the middle of the street. “But I also saw you two kiss and I have to say that hurt. I just don’t understand why I feel so territorial over you. I don’t want him touching you. I should take you inside my house and erase every touch of his.”

Looking down I feel guilty. If he only knew how he touched me earlier in the night.

“Do you want him?” He asks bringing me out of my daze.

“I still don’t know,” I say with conviction looking up because I don’t have a clue.

“I don’t know that either.”

He’s the safer choice. If things don’t work out with Jace, or he is just another notch on my long belt full of notches, there is absolutely no collateral damage. There is no possibility of losing a friend or people that I call family, and I’m attracted to Jace. I normally don’t feel so connected to someone right away besides physically but there is something about him that makes me want to know him better.

But I can’t lose Trent.

There is no denying the sexual chemistry between the two of us, and I know that we would be explosive in the bedroom. Deep down inside I’ve always wanted something with him but until today I didn’t realize it was there.

Two weeks ago I was speed dialing Chase for our monthly screw and today I’m considering changing my casual sex dating life for one of two men who are offering me more.

With a quick goodbye and a promise to call later this week, I head home to try to rid myself of this horrendous headache that has slowly seeped its way in. After I pop some medicine and take a bath I pour myself into bed.

The light from my phone blinks with waiting text messages.

Erin: Lucy, you have some ‘splainin’ to do!
Sexy Jace: Sweet dreams, sweet thing.
Trent: Choose us.

I cry myself to sleep that night knowing that soon I’m going to have to break someone’s heart…and it might be my own. 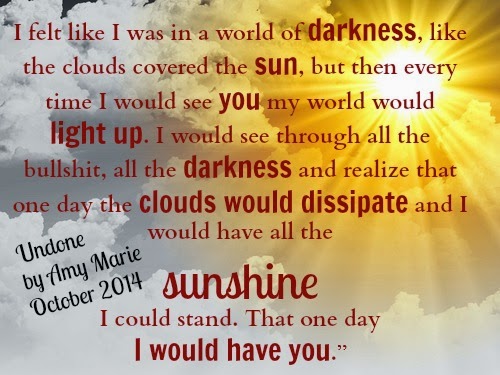 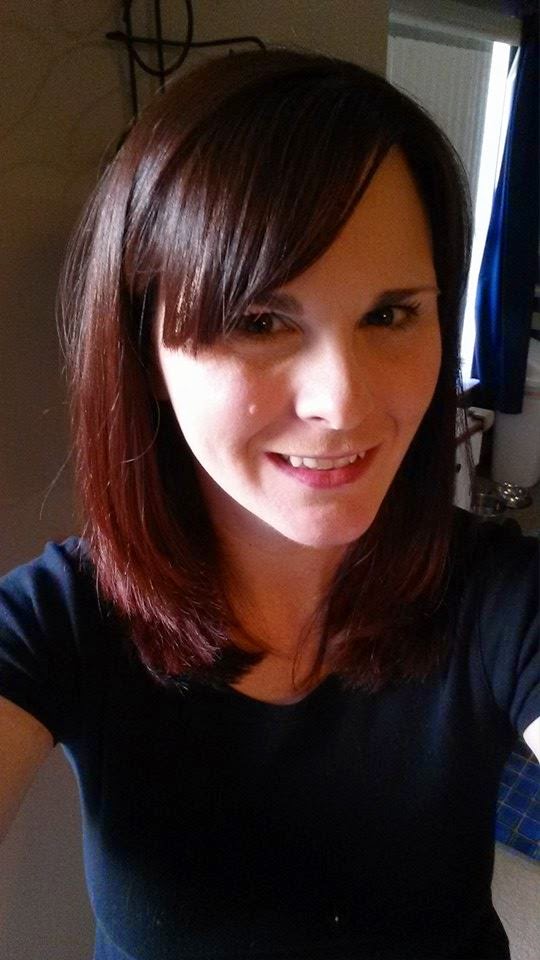 Amy Marie was born and raised in the suburbs of Chicago and now resides in Virginia Beach with her fantastically crazy husband and two kids.

As an avid reader, she never dreamed of writing her own novel until the characters started haunting her at night and in the shower.  Wanting to get it down on paper she set off on the journey that is more than she could have ever dreamed.

When not writing she can be found carting her kids around, breaking up their fights, cleaning up messes, teaching Zumba, or reading.

a Rafflecopter giveaway
Posted by Naughty and Nice Book Blog at 10:12 AM