BLOG TOUR~ UP IN FLAMES by Abbi Glines 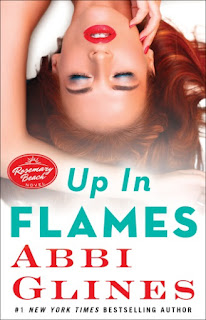 As the Prada-clad bad girl of Rosemary Beach, Nan Dillon has been called every vile name under the hot summer sun. Some of her reputation is deserved—she’s never had to worry about anything but maintaining her perfect figure and splitting Daddy’s private jet with her brother, Rush.

But Nan is far from happy. Rush has another kid on the way and doesn’t have time to catch up with his sister. Grant, the last guy she truly cared about, chose to be with her half-sister, Harlow, instead of her. And Harlow, who has never gotten over the way Nan treated her when she first moved to town, remains distant.

So when Major asks her out, she jumps at the chance to date the gorgeous charmer. Though she doesn’t know much about the sweet-talking Texan, and though it’s clear he doesn’t want to be exclusive, dating him beats hanging out with vapid socialites or watching Netflix alone at home.

For a while, Nan deals with Major’s playboy ways, but after he burns her one too many times, she takes off for an impromptu wild weekend in Vegas. There, she meets Gannon, a darkly seductive and oh-so-dangerous businessman who knows exactly how to handle her.

With Major asking for a second chance and Gannon haunting her dreams, Nan has to decide who to give her heart to. But what she doesn’t realize is that these players are involved in a much bigger game—and they’re already two moves ahead of her.

I honestly don’t know how I feel about this book. This is supposed to be the last book in the series, so I felt that I should have ended up with a better bang than it ended with unfortunately. In her own way Nan did redeem herself in the end, there were some major twists that I did not see coming (like completely didn’t see coming) but I expected more out of it. I mean I love all of Abbi’s books and I felt like this wasn’t one of the best ones.

Nan…. I’ve always hated her, from the very first book in the series, the very first interaction with Blaire. I mean how can we not? She’s very self-centered, snobbish, and stuck up as hell. But in this book we get to know Nan and find out why she is the way she is. It doesn’t excuse her actions though. It took me a while to get to like her. I don’t love her at the end of this book, I warmed up to her. LOL Nan is a different breed of character. She has felt neglected her entire life and she is just trying to feel loved by someone. Rush is getting too busy with his own family that she feels like she needs to find it somewhere else. The guys that she ends up with only see her for one thing. She realizes herself for what she is. She doesn’t want to be lonely so she gives it up to them so easily. But deep down, she wants what everyone has. A part of me kind of feels bad for her, I mean everyone should have that special person in their lives, but she kind of brought it upon herself. If Nan wouldn’t have been so cold hearted to everyone she came in contact with, maybe someone would actually love her? That’s what I think anyway.

But when Major shows interest in her, she’s all for it. She knows he’s the biggest player alive so she can’t be mad at him. He has been upfront with her from day one and has said what it is. He can’t be in a relationship and we see that he really is a big player. When Nan wants to give him a taste of his own medicine, she flies to Vegas to have a little fun of her own. It’s where she meets Gannon. With him, it’s like love at first sight. Nan is so taken by him, she’s never felt this way about anyone before. She forgets about Major instantly. Gannon treats Nan like she has never been treated before, which makes her fall even harder for him. He knows just what to do and just what to say to her. It’s like he was made for him. She practically in love with him and she knows nothing about it. And yet, she does the unthinkable.

Major realizes he messed up and wants a second chance. Nan is realizing that their time is up. But then, she knows everything about Major and nothing about Gannon. She has two men on her hands and doesn’t know what to do with them. Little does she know they know everything about her…. And when the truth finally comes out, all hell breaks loose and chaos lives will be changed forever.

What happens when the truth is unveiled about Gannon? What will Nan do with that information? Will they continue what they started or will that be the end of it all?  What will she do about Major? Will she cut her ties with him? Or is that one worth pursuing?

I surly didn’t agree with some of the things that Nan did in this book, but hey I never did like Nan to begin with. But she did grow on me. Knowing her story kind of helped me like her just a little bit. You will be glued to this book though because Abbi will throw some things at you that you will never expect to see. It defiantly did throw me for a loop there. It was great to see Blaire and Rush in this book, as well as their little guy. Just seeing Nan interact with him made it known that she does have a heart after all haha. I’m kind of sad though that this is the end.

ABOUT ABBI GLINES:
Abbi Glines is the New York Times, USA TODAY, and Wall Street Journal bestselling author of the Rosemary Beach, Field Party, Sea Breeze, Vincent Boys, and Existence series. A devoted book lover, Abbi lives with her family in Alabama. She maintains a Twitter addiction at @AbbiGlines and can also be found at Facebook.com/AbbiGlinesAuthor and AbbiGlines.com.

DIRECT LINK TO RAFFLECOPTER: http://www.rafflecopter.com/rafl/display/7c519361125
Posted by Naughty and Nice Book Blog at 11:31 AM