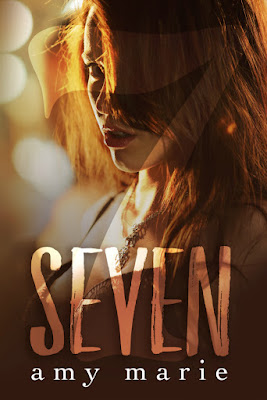 Innocence.
We’re all born with it. Navigating through life as though power, privilege, and money don’t rule the world. I’m guilty of it. I walked around, ignorantly thinking that the PITCREW, the most popular guys in high school, was where you wanted to be or who you wanted to date. They could have any girl they wanted, but they needed a challenge. They needed something to do to make their miserable existence exciting.
That’s where I came in.
How was I to know that the one night I willingly gave away my innocence would set off a chain of events, turning my world upside down?
Now, ten years later, it’s my turn to use sex, money, and lies to take from them all that they took from me . . . and more.
But the road to retribution has its twists and turns and I don’t want to make the innocent mistake of crashing. 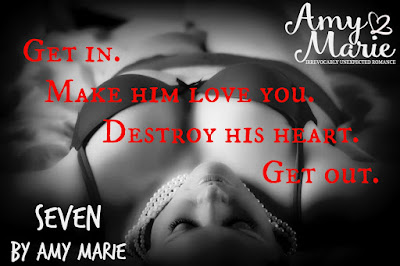 “Am I going to get your name tonight, beautiful?”
I laugh.
Really?
“Not interested,” I state, trying not to let the seduction in his voice fool me.
“Not interested? I’ve never heard anyone with that name,” he tries to joke, but I don’t laugh.
This is the kind of shit he uses to pick up women?
“What can I getcha?” Damien asks.
I point at my glass, requesting another drink, and motion towards Casen, “On his tab.”
“Budweiser for me.” Casen tells him before returning his full attention back to me. “If I’m going to buy you a drink, then it’s only fair you tell me your name.” His leg brushes against mine, lifting my skirt and exposing more of my thigh. Goosebumps spread across my skin like wild fire and I will them down.
Stay focused, Em.
My fingers come up to play with my necklace, and I relent, “Embyr.” I pick my gaze up and stare directly into his eyes. I drag them down his body, noticing the long-sleeved, black Henley he’s wearing and faded jeans. His shoes are black, as well, and they look like they hold massive feet. I peek at his hands, seeing exactly what Trinity meant. They are huge.
A moment passes before he says, “Don’t you want to know my name?”
I already know your name. Casen Parker. Fire fighter. Lived with your friends, my other high school bullies, Ian and Reece, up until two months ago, when you all ventured off and got your own places. Homecoming King in high school and graduated with honors in fire science.
But, I don’t say all that.
“Okay, then.” I roll my eyes as if the idea is beneath me. “So, what’s your name?”
He stares for a moment before widening his smile. “Casen.”
His cockiness pulls me in and I can’t bring myself to turn away. His heated tone breaks through my barrier and a flood of emotions take over. Even though it’s been ten years, he still looks the same and I feel a spark of not only hatred but attraction. I didn’t expect that and it makes all of the high school memories come screaming back at me. They consume me. My chest tightens while I feel my face burning. I can’t control the tremble of my hands as I pick up my glass trying to keep this panic attack under control.
I haven’t had one of these since high school.
I take deep breaths, gasping for air, hoping I don’t pass out. It’s not working. The memories continue to suffocate me. I feel constricted.
I can’t fucking breathe.
A gentle touch glides over my back and I jump at the contact. “You okay?” Casen asks concern evident in his voice.
Deep breath in. Deep breath out.
I’m finally able to lift my head and slide off of the stool, grasping my purse to my chest. “Yes. I just…” I stumble. “I need a moment.”
I race to the bathroom, knowing full well I am fucking this up. I’ve managed to screw Patrick and Thad over no problem. So what is so different that, just speaking to Casen twice in the past week, has me turned inside out? The bathroom door slams against the tiled wall when I barge in and lock myself inside. My forehead meets the cold metal of the door as I chastise myself.
Get your shit together, Embyr.
You hate him.
He didn’t stop them.
He repulses you.
I repeat this over and over until I believe what I’m saying. It takes a few minutes, but I gather myself and hold my head up high as I stride back to the bar, shoulders straight, like I didn’t just fall apart in front of my prey. When I turn the corner, I see Casen looking down at his phone typing furiously, and I pray I didn’t lose him. I’ll be pissed if I screwed it all up by letting his good looks and charm suck me in at a vulnerable moment.

Seven is unlike any other book I have read. Amy Marie will give you one hell of a mind f**k that’s for sure. From the moment you start that first few pages, you will become hooked and won’t want to put this book down. There are so many twists and turns you will not be able to figure this book out. Seven is filled with a lot of angst and suspense that will keep you at the edge of your seat that will keep you guessing. You may need a fan close by because the scenes in here will leave you needing a cool down session. Embyr goes through turmoil, heartbreak and figures out if revenge is really worth her way of life.

Embyr Quinn has had one hell of a past she would like to very well forget but as much as she would like to, she sure as heck can’t. It will always be a part of her. The guys from the PITCREW have pretty much ruined her life and she has made it her life mission to ruin theirs. For Embyr, she really can’t forgive and forget, she must get even. She has nothing left to live for her, so even 10 years later she is still giving it her all.

With a new look, a new outlook on life, and a whole lot more confidence, Embyr has one goal in mind. She will help karma get a hold of these guys. One by one Embyr is getting closer to these “men” and she is slowly destroying them and their reputation. Embyr will do anything to see them ruined, and I mean just about anything. It seems to be working as each victim that she seems to get her hands on does not remember her and is slowly going down. Revenge seems to be getting sweet. Karma is becoming her friend. Until the one sets his sights on her. He is on that list, but he seems to be one of the biggest challenges of all. Embyr has felt that instant connection with him years ago and once again it has returned…. Years later when he is back in the picture.

Embyr tries her very best to stay away from him because he will be the biggest game changers of the game. He is after all one of them. But she can’t seem to shake him and he doesn’t seem to take no for an answer. I mean if you saw him for yourself, you wouldn’t be able say no either. As much as she tries, her body just can’t deny him. She has such a strong reaction to him that she feels him in the room. Embyr decides to give in to their physical attraction and walk that thin line. She knows the minute she makes that decision she’s playing with fire but she’s willing to take that risk anyways. He’s different from the other guys, she knows it, but he’s still a part of them so he must get what is coming to him.

What will happen when they get to know each other better? When feelings get involved? When the truth of who she really is comes to light, what will happen to them? Will they be able to overcome it all? Or how about when her intentions comes to destroy him surfaces? Or is Embyr playing with her own karma this entire time?

I truly loved Embyr…. Her strength to endure and overcome everything that was thrown at her is remarkable. I know some of you will disagree with her tactics. She’s cutthroat and has no care in the world when it comes to those men. But when you think about it, she’s out for revenge. She’s hurt and alone and wants to see them suffer just as much as they made her. When you really do get to know her, the real her, she’s pretty down to earth, she can be friendly and lovable when you need her to be. And sigh…. Casen… I’ve already claimed him to be my BBF…I didn’t want him to be her target because he is such a sweetheart. So persistent to get her and when he did, he did everything for her. I could never have pictured him to be a part of that group to ruin her, but he was. And damn was it hot when he was around… just saying…. Amy did a fantastic job with this storyline. It wasn’t as all over the place as I thought I would initially would be. She defiantly kept you on your toes and kept you guessing every step of the way… I just didn’t like how it ended…. I can’t wait to see where she takes us next.

I received an advanced copy for my honest review. This review was done by Jenn. 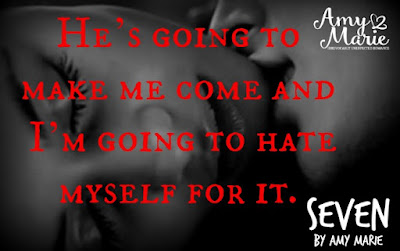 Amy-Marie was born and raised in the suburbs of Chicago and now resides in Virginia Beach with her fantastically crazy husband and two kids.

As an avid reader, she never dreamed of writing her own novel until the characters started haunting her at night and in the shower.  Wanting to get it down on paper she set off on the journey that is more than she could have ever dreamed.

When not writing she can be found carting her kids around, breaking up their fights, cleaning up messes, teaching Zumba, or reading.

Posted by Naughty and Nice Book Blog at 11:45 AM