Worth It All (A McKinney Brothers Novel, Book 3) by Claudia Connor 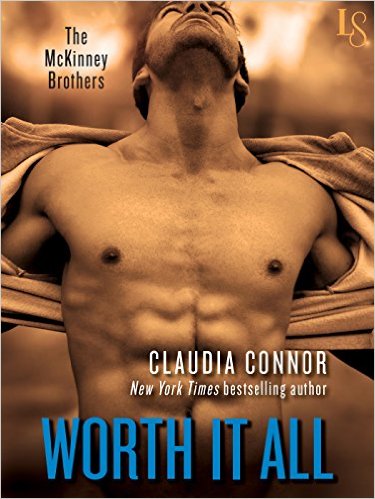 
SYNOPSIS:
She’s fighting for control. . . . Paige Roberts learned to fend for herself growing up. Now she’s doing everything possible to give her daughter, Casey, the stability she never had. But when the vivacious five-year-old decides she’s done wearing her prosthesis, Paige faces her toughest challenge yet: trusting a handsome, brooding stranger who simply wants to help. He’s struggling to connect. . . . JT McKinney lost more than his leg in a car accident that stole his dreams of pro football. Eight years later, he's made a new life for himself far away from his old one. His business is developing cutting-edge prosthetics and he’s more than happy to turn his attention to machines instead of people. Still, he can’t shake the feeling that something’s missing. Will they take a chance on love? . . . When JT gets the chance to help Paige’s daughter, he takes it. He never planned on the two of them tearing down his walls or teaching him to believe in himself again. Paige might not believe in happily ever afters, but JT wants more than anything to be her prince. They’ll both have to let go of the past if they want a future.

Worth It All is an outstanding read. Connor has proven to be a stand out in writing families, and Worth It All only adds another to her track record. Paige and Jake coming together is brilliant. The build and slow burn of their relationship is nothing short of wondrous. They stole my heart. Both so isolated, yet open. Casey was a treat to read ~ written true to age. I loved that she is intelligent, funny and brave. She also has great instincts about men. Each time I read a book in this series, I swear it’s my favorite. The entire series is incredible and should not be missed.

Connor writes romance you wish for in real life ~ completely swoon-worthy, sexy, and filled with honesty and love.