A sexy, suspenseful new romance novel from Lauren Blakely, author of the New York Times Bestselling Seductive Nights series…. She was the one who got away… Ten years ago, Brent Nichols let the love of his life slip through his fingers. It’s his greatest regret, especially since she’s all but disappeared. But when the gorgeous and captivating woman walks into his life unexpectedly, he’s determined to win her back. Whatever it takes, he won’t make the same mistake twice.

Easier said than done… Shannon Paige has hardened her heart to the man she was once engaged to be married to. After the way he left, and after the hell she’s been through with her checkered family, there’s no way she’s letting him into her life again. The problem is, the second she sees him, he’s more handsome and charming than before. And she’s torn between wanting to fight with him and wanting to sleep with him - maybe both. Soon they fall into each other’s arms, consumed with a desire that burns through the years. But if these two fiery lovers are going to have a real second chance at this kind of intense, passionate, bone-deep love, he’ll have to give her his whole heart, and she’ll have to give up all the secrets from her messy past. And that messy past is about to spill over into her carefully constructed present… SWEET SINFUL NIGHTS is book one in SINFUL NIGHTS, a four-book series. Each book will follow a new couple. 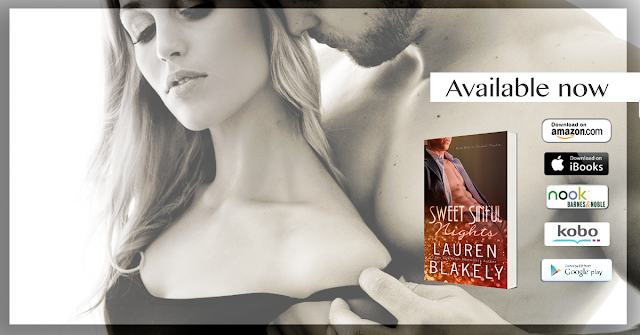 I was very excited when I read the blurb for Sweet Sinful Nights, seeing that it was Brent Nichol's book. I LOVED Brent when I was introduced to him while reading Clay and Julia's book in the Seductive Nights Series.

Once I started Sweet Sinful Nights, I could not put the book down. I absolutely LOVED it. Brent is an easy going guy. Laid back, very loving, very nurturing and extremely funny. He only had one flaw. He wasn't willing to compromise and that lost him the love of his life... Shannon Paige.

Both Brent and Shannon were offered a job opportunity. Shannon, doing as most woman engaged to be married, considered her fiance's opinion before accepting the position. Brent, on the other hand, was offered a job that he couldn't refuse and accepted it on the spot, without conferring with Shannon. This then set into play the domino effect. Every action has a consequence. Brent's actions cost him everything.

While I fell in love with both Shannon and Brent, I hated seeing their misfortunes. My heart hurt for Shannon, as her heart shattered into a million pieces when Brent walked away from her.  It wasn't easy for Brent either. They were both in love with each other. Sometimes decisions are made hastily, and they aren't well thought out. We all make decisions and say things that we wish we could change.

So when the opportunity arises and their paths cross ten years later, will the sparks still be there? Have either of their feelings changed for each other? Can Shannon forgive Brent for walking away from her all those years ago?  Can Shannon trust Brent again? Will Brent finally put Shannon first?

An ARC was provided in exchange of an honest review.


“My friend Ally showed me a video she saw on Facebook," Shannon began. "It’s this clip of a girl who grinds on her boyfriend in public while his hand is under her skirt, and they don’t even try to hide that he’s fingering her and getting her off.”
“I like getting you off,” Brent said with a naughty glint in his brown eyes.
“You cannot resist segueing back to dirty talk when I’m telling you a story.”
“I’m so sorry,” he said, placing his palms together. “The story was about a guy making a girl come. Forgive me for thinking about making you come. It’s only my favorite thing in the entire world to do.”
She shot him a tell me more look.
“It’s a hobby I once practiced a few times a day,” he added. “One I’m very interested in taking up again.”
A ribbon of warmth spread through her chest, both from the suggestion of one of her favorite activities, too, but also from the way he was so quick on his toes, so fast with a joke. The man had always made her laugh.
“Anyway, back to the video. So the funny part is they had no clue they’d been caught on camera, even though they were totally obvious. They thought they were being quiet and sneaky when he was trying to make her come.”
“I could make you come quietly,” he said with an easy shrug of his shoulder. “I can make you come loudly, too. I can make you come in pretty much any way.”
She scoffed. Not because it was untrue, but because he was so damn sure of himself. “Confident much?”
“Yeah, I am. I have the track record to prove it. You’re pretty much the only class I aced in college.”
She laughed, looking down at her lap. He was too much sometimes. “Straight As, Brent?”
“Hell no. Higher. I earned A-pluses across the board in your pleasure.”
She rolled her eyes. “You’re relentless.”
He leaned forward across the table, flashing her that cocky grin she’d loved so much. “When it comes to delivering multiple orgasms for you, yes. Relentless is precisely what I am.”

I am thrilled to share some exciting news with you! Many of you have been patiently waiting for SWEET SINFUL NIGHTS, the story of Brent Nichols and the woman he loves. Many of you already know Brent since he’s the younger brother of Clay Nichols, from NIGHT AFTER NIGHT....The good news is this-SWEET SINFUL NIGHTS is Book One in a new erotic romance series, Sinful Nights, written in the high-heat, high-stakes, high-glamour style of the Seductive Nights series that readers know and love, but heading in a new direction with a new family that’s full of drama, checkered pasts and dangerous life-and-death secrets. S

SWEET SINFUL NIGHTS kicks off this new series with a fiery, passionate, and suspenseful story of two lovers reuniting after ten years. Each book in this series follow a new couple and will be set against the backdrop of sin, money, sex, greed, passion and love in the city of Las Vegas.

Brent’s love interest is Shannon Paige, and she has three brothers. Yep, you guessed it - each of her brothers will be getting a book! And while each book in the Sinful Nights series follows a new couple, get ready for a storyline that will carry across the entire series -- a story of danger, risk and high-stakes suspense.


Q&A about the Sinful Nights series:

Does this take place after the events in the Seductive Nights series?

A: Yes. This story begins one year after the final Seductive Nights book.

Can I read this if I haven’t read the Seductive Nights series?

A: Yes! You won’t miss a beat if you start with SWEET SINFUL NIGHTS. That’s why it’s Book One!   Brent is Clay’s brother.

Does this mean Clay will be in SWEET SINFUL NIGHTS?

A: Why yes! He will indeed appear in a handful of scenes!

Is this series similar to the Seductive Nights series?

A: Absolutely. The hero in book one is a Nichols man! Nichols men are known for being dirty, passionate and fiercely loyal! You can also expect scorching hot sex scenes, dirty talk, high-class and glamorous settings, and passionate love. Have I mentioned the heat :)?

And be sure to watch for the next titles in the Sinful Nights series!

Lauren Blakely writes sexy contemporary romance novels with heat, heart, and humor, and her books have appeared multiple times on the New York Times, USA Today, Amazon, Barnes and Noble, and iBooks bestseller lists. Like the heroine in her novel, FAR TOO TEMPTING, shethinks life should be filled with family, laughter, and the kind of love that love songs promise. Lauren lives in California with her husband, children, and dogs. She loves hearing from readers! Her bestselling series include Caught Up in Love, Seductive Nights, No Regrets and Fighting Fire. She recently released Forbidden Nights, a standalone novel in her New York Times Bestselling Seductive Nights series that became an instant New York Times Bestseller. Her next book is 21 Stolen Kisses, a new adult romance filled with angst and romantic tension, releasing in May. This summer she'll release Consumed by You, her next title in her NYT Bestselling Fighting Fire series about sexy firemen and the women they love, and Sweet Sinful Nights, the first book in her new series Sinful Nights. She also writes for young adults under the name Daisy Whitney. To receive an email when Lauren releases a new book, text BLAKELY + your email address to 678-249-3375 (please use the actual + sign).

What would make your summer sinfully sweet? A new iPad Mini to catch up on all of your summer reading or a mini vacation?

Lauren is so thrilled that you are spending part of your summer with Brent and Shannon that she decided, as a special thank you, to give one lucky reader an iPad Mini or a gift certificate to their favorite hotel chain ($250 value).

Enter here for a chance to win!