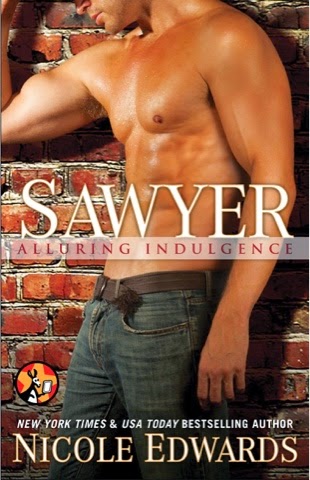 Link to an Excerpt: http://nicedwardsauthor.com/sawyer-excerpt.html

For more and exclusive content during release week readers can go to one of these links all week:
http://nicoleedwardsauthor.blogspot.com/
https://www.facebook.com/Author.Nicole.Edwards

I am obsessed with the Alluring Indulgence Series.  Whatever is in the water in Coyote Ridge, Texas needs to piped to the East Coast.  The Walker boys are SMOKING HOT.  Each Walker brother has their own personality, some more alpha than the other.  Sawyer has always been the easy going brother.  The one that always made you laugh.  The one that you could always go to.  He was the protector, he was the jokester.  We all know that he carried Ethan's secret for years.  Nothing bothered Sawyer, at least that's what he wanted everyone to think.

Sawyer has never had issues getting girls, they were usually falling at his feet.  But there was one girl that he wanted.  One girl that he has wanted for years.  The only thing is, this girl doesn't want Sawyer.  At least that is what she says.  Kennedy and Sawyer grew up together, they went to the same school.  So when Sawyer's actions from his past come back to bite him in the ass, he needs to prove to Kennedy that he isn't the same wise ass from high school. He grew up, he's changed.  Will Kennedy give him the opportunity to prove that he's changed? Can Kennedy let the past go?  Can she see Sawyer for who he is today, or will she hold the actions of a teenage boy against him forever?

Sawyer is tenacious.  He doesn't back down from a challenge.  He is a Walker.  The Walkers usually get what they want.  Sawyer will have to prove himself to Kennedy.  Sawyer is lighthearted, always trying to make Kennedy smile.  There is just something about her that draws him to her.  He knew he wanted her since she returned home from college.  The Walker Brothers have quite the reputation in the small town of Coyote Ridge.  Kennedy is the sheriff's daughter.  Will the sheriff approve of his daughter dating Sawyer?  Will Sawyer be able to convince Kennedy he is worth taking a chance on?


"I told myself a long damn time ago that if I ever got your attention and managed to hold it, I wasn't going to give you up?" ~ Sawyer

I absolutely LOVED Sawyer. I laughed so many times reading this book.  I was routing for him and Kennedy the entire time.  I wanted Kennedy to open her heart to Sawyer.  He shouldn't be punished for something he did in high school. Life is about second chances and Sawyer deserved one.  Nicole dropped a few bombs on us in Sawyer's book.  Some I was expecting, some I was not.  I can only pray that this series doesn't end soon.  I want to see what else is in store for the Walker Family.   This was one of my favorite scenes in the book. I had to cut this quote short.  I couldn't give any spoilers away!!)


"It's never been a secret that you didn't particularly like me.  Not that you didn't have good reason.  But, I'd like to think I finally wore you down... at least a little.  I've got plenty to make up for, and I will.  I will spend the rest of my life doing my best to make you happy." ~ Sawyer. 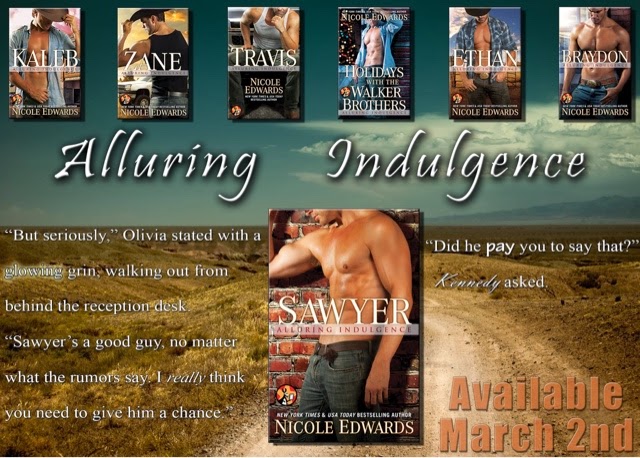