Countdown to the RELEASE of ASA by Jay Crownover 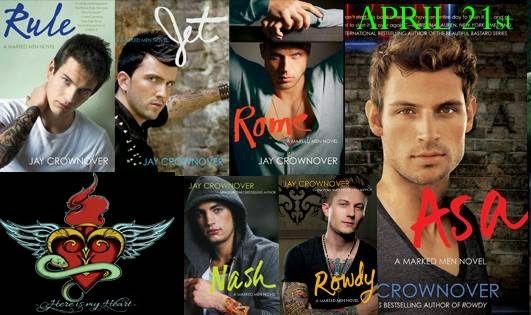 Next month, Jay Crownover is bringing her beloved Marked Men series to a close with the release of ASA on April 21. We’re so sad to see these bad boys with hearts of gold go, and we want to send them out with a bang! To that end, we’ve got some great things lined up over the coming weeks that we’d love for you to be part of.

Pre-Order Goodies
If you pre-order ASA and enter your information in at the following link, we’ll send you a set of all 6 Marked Men posters once ASA is on sale!
http://a.pgtb.me/LQX2w6


Marked Men Read Along
Each week, starting this week, we’ll host a Read Along on the Between the Covers Facebook of one of the Marked Men books. We’ll set up an event page where we invite you to post your thoughts as you fall in love with Rule, Jet, Rome, Nash, and Rowdy all over again. Throughout the week, Jay may pop in to answer questions or offer up her own thoughts on each book. At the end of each week, we’ll pick one participant to win a signed set of all 6 books (yes, including ASA!!). So that’s five chances you have to win just by chatting about your favorite book boyfriends!

You can take the conversation to Twitter using the hashtags listed! Tweet your favorite lines, why that particular Marked Man is your favorite, anything! Also, if you write about your reread on your own blog and tweet us about it, we’ll try to feature some of those posts on Between the Covers and AvonRomance.com!

Quizzes!
Just for fun, you can take these two Marked Men quizzes!
Which Marked Man should you marry? Find out here: http://bit.ly/1BPpapf
How well do you know the Marked Men? Jay will reveal a Marked Men trivia quiz later this week—be on the lookout!

KissCon Goes Between the Covers
And don’t forget that Jay will be one of the featured authors at our special New Adult Edition of Avon KissCon! Details below or at www.avonkisscon.com. There is a VIP reception and then a ticketed signing. You must purchase a ticket for each portion individually, but books will be sold and authors will be able to sign during both portions!