WORTH THE FIGHT LAUNCH by VI KEELAND 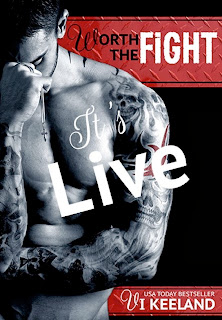 Synopsis:
It didn’t matter that the ref called it a clean hit. Nico Hunter would never be the same.

Elle has a good life. A job she loves, a great apartment, and the guy she’s been dating for more than two years is a catch and a half. But it’s boring…and she strives to keep it that way. Too many emotions are dangerous. Her own past is living proof of what can happen when you lose control.

Then Nico walks into Elle’s office and everything changes…for both of them. But what can the tattooed, hard-bodied MMA fighter and the beautiful and always steady attorney have in common? A lot more than they bargained for.

Review:
Vi Keeland has done it again! She is an amazing writer who just captivates the reader from start to finish. I fell in love with her writing in “Belong to You” and I instantly became addicted to her books, so I was expecting nothing less from her in this book. But wow.  She totally out did herself with this book.  I was instantly hooked from start to finish, and I had a hard time putting the book down. She has a way to capture the reader and place them into the story.  There were times where I felt like I was a part of the story itself and I felt the emotions the characters were feeling.

Elle had everything she wanted, everything she ever needed in life.  What more could she ever ask for?  She is a lawyer, she had a handsome guy who was also a lawyer and could relate to her.  She had a pretty steady life; a very predicable life.  Sometimes too predictable. It was too monotonous. Too safe. Too boring.  Yes it was what she needed, but was it what she really wanted?  She needed safe and guarded, something completely different from the past that she lived.  She was broken and now the only way for her to move on was to tuck away the memories from the past and to protect herself from feeling vulnerable again.  A past that left her traumatized, a past which she has tried so hard to block out of her life.

William could give her a life that she could ever imagine.  Any girl would be lucky to be with a guy like him.  It was the type of life she always felt she needed for herself.  William was a safe choice.  He would never let anything happen to her.   They met in law school and they have become best friends.  Their relationship started to include sex after a little while, but that’s all it was.  A friendship with sex involved.  Not once has she felt anything special for him.  But it’s all become so predictable.  She could finish his sentences for him.  Their dinner dates were at the same place at the same time every week.  Hell even sex with him became routine, and it was just that, nothing more, he would leave after.  Nothing changed.  Things became repetitive.  She felt like she needed to make a choice. William had always wanted to take their relationship to the next level but he never wanted to push her into it, it wasn't the type of person he was. So he just kept things the way they were hoping she would come around.  Did she want the safe, comforting route or did she want something more?

Nicholas “Nico” Hunter was a top MMA fighter who’s one fight had put him out of the ring for a very long time.  The one fight haunts him every day of his life.  It wasn’t his fault, he blames no one else but himself no matter what anyone tells him.  How can he go on living life with all this guilt?  Nico grew up in a house with all brothers and a single mom who juggled several jobs to take care of them all.  They are a very tight knit family who took care of each other.  He took on the love of fighting at a very early age. He started working at the local gym and when Preach, his now coach, realized how good and natural he was, he took him under his wing.  Nico knows what he wants in life, and he always gets what he wants.

William brought Nico to Elle’s office because he needs her help getting Nico out of a contract and thinks Elle could help.  With one look at Nico, Elle’s world stops.  I mean whose wouldn’t.  Nico is HOTT!  Piercing green eyes, over six foot tall, all muscle no fat, with tattoos all over, and this gorgeous piece of man is wearing a suit. Now just imagine this man without anything on!  When he takes her hand to shake it, she gets this sensation feeling all over her body, which is something she has never experienced before.  She is so shocked by what she is feeling, she just stares at him.  She forgets that William is even in the room with them. Weird right?  The guy that she’s currently sleeping with is standing next to her, while she’s getting these weird tingly feelings from another guy right in front of him.  Feelings that William has never been able to give her.  That right there was her first sign.  After she composes herself, she agrees to working on the contract for them.

“And when I look in your eyes I see a little light flicker.  And for the last twenty four hours all I could think about was what it would take for me to turn that flicker into a flame.” ~ Nico

“I’d love to see you again. You let me know when that not really turns into a solid no.” ~ Nico

For once in her life Elle chooses to take the plunge and makes herself happy.  Nico seems to bring out feelings that she has been keeping locked hidden away.  She feels alive with him. Happy.  He puts her needs before his and he takes care of her.  No one has ever taken care of her before.  She has always been an independent person and has always taken care of herself.  It feels good to be taken care of for a change.  Being a fighter, Nico is an amazing cook since he needs to watch what he eats in order to stay fit.  How do you think this gorgeous man keeps his fine body?  Elle is so used to take out and can’t cook for shit.  She tried to cook for him once and burnt it.  Nico loves to be with her and take care of her.  The way he looks at her, you can definitely tell he truly cares for her.  When he first met her, he knew there was something about her that changed him.  You can see the natural chemistry that the two have.  The conversations flow naturally and time seems to fly by when they are together.  They always want to be with each other and miss each other when they are apart. The more Elle spends time with him, the harder she falls for him.  This is unchartered territory for Elle since she has never felt like this for anyone before. She doesn’t even know what to do with these feelings since no one has ever made her feel this way.

I love how Nico can be so possessive about Elle.  He definitely does not want to share with anyone.  He hates all the guys seeing how gorgeous Elle is and wants to beat them all up.  He doesn’t even like the idea of Elle and William being friends since he know that William wants something more from her and will try anything.  Elle finds Nico’s possessiveness very sexy, especially in the bedroom.  I mean, gosh.  Who doesn’t? The two of them have a natural chemistry but the sexual chemistry that these two share will leave you hot and bothered let me tell you.  You’re going to want a man to slam you against a wall after reading this book.

Nico is developing very strong feelings for Elle. Feelings that he has never experienced before and he doesn’t know what to do with them. Elle has given him the urge to start fighting again.  He is very afraid that she will run as soon as she finds out his deepest, darkest secret.  But when she knows the secret and doesn’t run, he still pushes her away. What else is he afraid of?  Elle tries to help him get through his emotional baggage.  She even puts aside her feelings from the past, to help him seek some kind of help.  But he says some very hurtful stuff to trigger her past and she runs away from him, calling off their relationship.  Elle is running from her own secrets that have come back to haunt her, but now they’ve become real again.

Will Elle be able to forgive Nico after the hurtful things that he said to her?  Will Elle ever be able to tell Nico completely about her past and what she’s running from?  Will he be understanding or will he leave her?  Can Nico be completely honest with her and tell her about all of his demons?  Will he finally get through it and realize that it wasn’t his fault and move on?  Will they both be able to get past their secrets start fresh?  Will Nico get back to fighting again?  Will their love be strong enough to move on together?

I completely fell in love with this book from the very beginning.  I love the chemistry between Nico and Elle.  It was just so natural between the two of them, they really didn’t have to try.  It’s like they knew when they first met they had some special connection.  They are both so broken and suffering from their own demons from their pasts and they’re both struggling to move on from them.  I really admired the strength Elle had to put aside her demons to help Nico.  That took a lot guts.  But when Nico started to go off on her, man that was a dick move on his part.  She was just trying to help him.  If only he knew her past then he wouldn’t have said the things he did.

I loved how Nico always, always put Elle's needs before anything.  Not only do you fall in love with the two main characters, you fall in love with the supporting characters as well. Regina is Elle’s coworker and dubbed BFF, who is so much older but with the phone sex voice who will have you laughing your ass off.  Then you have Preach Nico’s trainer, who is like the father role, Nico’s family, some of Elle’s family and you have Vince, the pestering teenage kid that Nico has taken in and is training who is also his biggest fan.  This book will definitely leave you laughing, it will leave you a bit emotional, it will definitely leave you at the edge of you seats wanting more, and it will most likely leave you all hot and bothered. Amazing job once again Vi.  Can’t wait for Vince’s story. 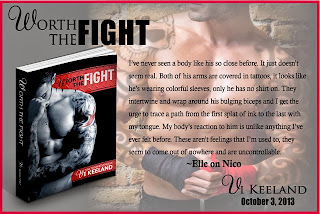 
Vi Keeland is a native New Yorker with three children that occupy most of her free time, which she complains about often, but wouldn't change for the world. She is a bookworm and has been known to read her kindle at stop lights, while styling her hair, cleaning, walking, during sporting events, and frequently while pretending to work.  She is a boring attorney by day, and an exciting USA Today Best Selling smut author by night! 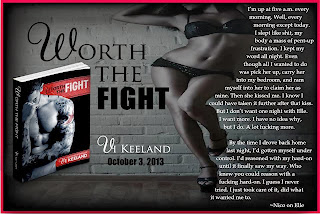 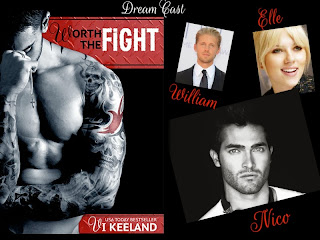 a Rafflecopter giveaway
Posted by Naughty and Nice Book Blog at 7:01 PM