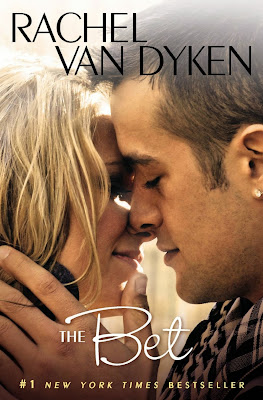 "I have a proposition for you." Kacey should have run the minute those words left Seattle millionaire Jake Titus's mouth. It's been years since Kacey's seen her childhood friend Jake, but the minute Jake mentions his ill grandmother, Kacey is ready to do anything for the sweet old woman. And if that means pretending they're engaged for her sake-so be it.

But Kacey wasn't counting on Jake's older brother Travis still being there. She calls him "Satan" for a reason: she's never forgotten the way he teased and taunted her. Yet when they meet again, Travis's gorgeous smile is a direct hit to her heart . . . and Kacey's more confused than ever. As the days pass, only one thing starts to become alarmingly clear-she never should have accepted Jake's deal . .

When a six and seven year old boy make a bet, does is really count?  Well, when Jake was six and his brother Travis was 7, they made a bet and the wager was high.  Who was going to marry Kacey, their best friend.

Jake and Kacey were inseparable growing up.  Of course, Travis was around as well, but he didn't speak much to Kacey.  For reasons that he and his Grandma only knew, Kacey just assumed it was because he hated her.  Kacey never knew what she ever did to Travis for him to torment her growing up and the older they got, he just stopped speaking to her all together.

Kacey and Jake dated while in high school and once again while in college.  Jake has always held Kacey's heart, until one night he shattered it and things were never the same between them.  A tragedy occurs in Kacey's life, and when she needed Jake the most, he wasn't there for her.  It has been years since Kacey has seen or spoken to Jake.  Jake and Kacey have never discussed what happened between them that dreadful night.  No body else knows what transpired between Jake and Kacey, so when Jake asks Kacey to help him out, she realizes that Jake has never told his family that they are not close anymore and haven't spoken in years.

Jake shows up and has a proposition for Kacey, one that she can not turn down.  Jake wants his family to think that he and Kacey are engaged.  He wants the media to think that they are engaged, this could help boost his image, since he had recently received some negative publicity in the media.  Kacey decides to take Jake up on his offer, regretting the moment she does.

"Seattle's most famous bachelor had just proposed marriage.  Albeit a fake marriage, it was still a proposal."

Jake has something up his sleeve, Kacey just doesn't know what it is yet. Jake uses is ailing grandma as his excuse to lure Kacey home.

"It's for more than just me.  It's for Grandma, Kace.  She isn't doing well.  This may be the one thing that makes her want to keep on living."

How could Kacey so no to that.  Kacey has always been very close with Jake and his family.  When Kacey agrees to go back to Portland for Labor Day Weekend with Jake, she never expected how her weekend would turn out.  Kacey left Portland for a reason, one she was not ready to face yet.

When Jake and Kacey arrive home, the family is thrilled to hear about their engagement, and Jake's mother wants to start the planning immediately.  Kacey realizes that she may be in over her head because once his family finds out their engagement in a rouse, they are going to be upset with them.  While home, Jake dumps Kacey off at the family home with Travis and his parents, while he acts like he needs to head to the office for business, however he is out living up his bachelor status.

Travis and Kacey seem to spend quite a bit of time together, and Travis is furious at how Jake is treating Kacey.  Travis has always been there for Kacey, it might not have been they way Kacey had wanted him to, but all in all, Travis has always been by Kacey's side even when she didn't realize it. Travis has been in love with Kacey since they were kids.  He always just took a step back because of Jake and Kacey's relationship.

One night things change for Kacey and she finally realizes that maybe it hasn't always been Jake that holds her heart.  Maybe it was someone else who has been there the entire time, right under her nose.  Her parents had seen it, Grandma saw it.  How did Kacey miss it?

"Where have you been all my life?" she said, watery-eyed.  "Home", Travis answered a note of seriousness in his voice.  'I've been home, waiting for you."

The Bet, has got to be the funniest book that I have read in a long time.  The bantering between Kacey, Jake and Travis had me laughing out loud.  I had tears running down my face.  Then there is Grandma..  She is a freaking HOOT and  had me in stitches.

The Bet captivated my attention immediately from the Prologue.  I finished it in one day.  I could not put my iPad down.  Rachel Van Dyken did an AMAZING job with this book.  I felt as though I could relate to the characters.  Their situation was very believable.

“Kacey? Is that Kacey?” A feminine voice shouted from behind Wescott.“Hey, Mrs. Titus!”

Kacey reached for a hug from the lady but was scolded.


“Now, you know I’ve told you to call me Bets!”
Bets was Jake’s mom’s nickname. When Kacey was young she’d had a hard time pronouncing Betsey for some reason, so she just called her Bets. But at the ripe old age of twenty-two, she wasn’t sure if that was still allowed.
With a warm smile, Kacey embraced Bets. “I’ve missed you.”
And she had. Desperately.

Bets’s warm hand enclosed Kacey’s. She led her to the couch and began chattering about Jake.

“We just knew you two would end up together one day! Didn’t I tell you, Wescott?” She giggled and reached for her iced tea, her long red fingernails clanging against the cool glass.

“Now, honey, we know that you and Jake are trying to be private about things, but…well, we would love it if you got married here!”


Kacey felt panic tighten her chest. “We would love to!” She looked to Travis for help, but his eyes had taken on that darkened hue that said he’d murder anyone who breathed in his direction. “But, you see, the thing is…We aren’t sure we’re going to get married locally. We both work so hard, and we thought maybe of just going to Vegas or something.”
“Vegas?” both parents asked. They shook their heads in unison and laughed.

“Oh honey, I forgot about your sense of humor! Why the rush? Why get married in Vegas, that is unless…” Bets looked at Kacey, her eyes squinting. Oh God. Oh no, was she thinking…


“You’re pregnant!” she shouted, nearly dropping her tea to the floor. “Oh my heavens! Oh dear me. Oh, Grandma’s going to be so delighted!”

“She’s not telling anyone yet,” Travis interrupted with a devilish smirk. “You know, the media and all that.”

“Oh, oh, oh!” Bets scurried around the room until she finally stopped in front of a few shelves. “Oh honey, don’t you remember when you and Jake used to play house? And Travis…” Bets looked at Travis and pointed. “Didn’t you play with them? Because they needed an extra person to stand in for the…”


“Dog.” Kacey smiled at Travis and stifled a giggle. “He was our dog when we played house.”

“Oh, how nice.” Bets winked at Travis and returned to digging out scrapbooks. “I’m sure I have some pictures we can use for the wedding.”
Kacey, still trying to gain control of her panic, swallowed before asking, “Why do we need pictures?”
“You know.” Bets waved her hand in the air. “For the video montage! You have to have a video montage! They’re all the rage. You know, baby pictures, prom pictures, that sort of thing. Guests love it!”


“But what about Vegas?” Kacey asked in a hopeful voice.

“Posh.” Bets shook her head vigorously. “We’ll pay for the entire thing. And you’ll get married here, at Titus Abbey.”

“Swell,” Kacey mumbled, then glared in Travis’s direction. He was gone. She leaned across the sofa and noticed him in the kitchen opening a beer. Oh, nectar of the gods! Just when she needed something strong the most, and Jake’s family thought she was pregnant.


Oh God. She was going to have to be a closet drinker. She would have to sneak down to the kitchen just to snag some tequila to numb the guilt and pain. His parents were going to kill her, and they would hate her forever. Which meant she actually had to marry Jake and then turn a blind eye to his inability to keep his pecker in his pants. And then she’d start hoarding and buying cats in order to fill the void in her life.

The drinking would get worse. Jake would hate her, and in a final desperate attempt to regain her youth, she’d die on the table trying to get plastic surgery.
This. Could. Not. Happen!


“I, uh, I’m going to see what Travis is up to!” Kacey bolted from her chair and ran into the kitchen.

Posted by Naughty and Nice Book Blog at 12:50 PM