All I Ask by Corrine Michaels 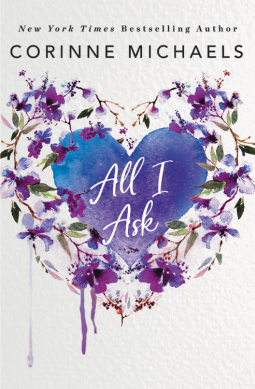 Teagan Berkeley is trying her best. A single mom raising a precocious teen, she may have given up on her dreams, but she's accepted her life in her small beachside hometown. Now the one person who abandoned her when she needed him the most has returned, bringing back memories of what might have been.

Derek Hartz arrives in town with a teenage daughter-and he's full of guilt over his failed marriage and the way he ended his friendship with Teagan. He's determined to set things right with her, but first he needs to gain her trust, something he's not convinced he deserves.

As Teagan and Derek open up to each other-and confess their deepest secrets-it's impossible for them to deny what's always been between them. But just when their happily ever after is within reach, their complicated history surfaces again and threatens to keep them apart. Forever.

All I Ask was a heartbreakingly beautiful story about two best friends afraid to voice their feelings for each other.

Teagan and Derek grew up together, shared all their moments with each other. Teagan was in love with Derek but the timing never seemed to work. Either she was in a relationship or he was. Teagan finds herself in a dilemma and ends up pregnant and standing as Derek's man of honor at his wedding. What do you do when the love of your life is marrying someone else? Do you stand by and keep your feelings to yourself? Do you finally get the courage to speak up and tell him, or do you stand in silence and watch the love of your life walk down the aisle with someone who isn't you?

When Derek is giving an ultimatum, it's either Teagan or his wife, Derek sacrificed his friendship with Teagan. Years pass and neither of them speaks to each other. Teagan is none the wiser to the decision Derek was forced to make. Years pass and Teagan wonders what she did to deserve to be deserted by her best friend.

Teagan is a single mom raising her daughter on her own. She isn't living the life she wanted but she is doing the best she can until one day her daughter gets into trouble at school. When she comes face to face with Derek after years of not speaking or seeing him, her world is turned upside down. Derek is back home to help his father out with his veterinary practice. Derek has some explaining to do, but will Teagan be willing to listen? Has too much time passed for Teagan to forgive Derek?

The heart knows what the heart wants, but after years of hurt, can Teagan move on from the past? Will their love for each other be strong enough?

Posted by Naughty and Nice Book Blog at 11:24 AM