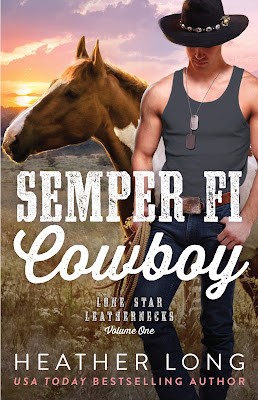 A Leatherneck by any other name can still kick ass, which is just what retired United States Marine Corps Captain Tanner Wilks plans to do when he returns to his Texas family ranch to care for his ailing father. And nothing will stop him from achieving his mission—not even a lithe, brown-eyed town veterinarian who seems hell-bent on driving him wild.

Captain Tanner Wilks, honorably discharged from the U.S. Marine Corps, returns home to find his father struggling after his latest heart attack. Worse yet, Julia Heller—the sexy new girl in town that he once spent a hot night with—is the resident veterinarian who’s made a home for herself at Round Top ranch, and doesn’t seem to be in a rush to repeat their time together.

It falls on Tanner’s shoulders to take on the ranch and keep an eye on his father before he falls victim to another heart attack. But Julia doesn’t appreciate Tanner coming in or pursuing her. Even if he’s hot as hell and can make her quiver with just a look. Ousting her may give Tanner the leverage he needs to corral his father, but first he has to wrestle with his own heart. 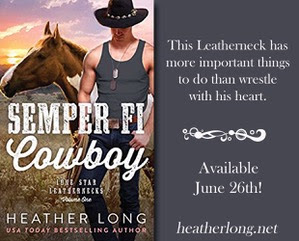 Excerpt:
The sun setting ahead of him painted the sky in vibrant, bold colors while softening the harshness of the empty land. Home was the Hill Country, and he could almost see it waiting for him over the next rise. Nearly twenty years since he’d set foot in Durango Point. He’d stop for the night in town: get a beer; see the nightlife. And then he’d get some rack time before he headed out to Round Top.
One more day wouldn’t hurt anyone.
Ten minutes later, he parked outside the Silver Dollar. The glorified honky-tonk dominated the corner of Main Street and Oak. Open daily, it’d offered live music on the weekends when he was growing up. According to their weather-beaten marquee, they’d added Wednesday nights to that list. The menu consisted of wings, burgers, fries, and nachos. The bar served only beer and wine. None of the locals complained—or they hadn’t started to, anyway.
Staring at the wood-and-brick structure, Tanner couldn’t get over the odd sense of déjà vu invading his limbs. Sure, he’d flown into San Antonio, taken a taxi to the storage facility where he’d kept his truck, then driven home. Intellectually, the facts remained the same, but sitting in his truck outside the bar, he could almost imagine it was twenty years earlier and he’d finished his homework with enough time to slide down to the dance hall. They didn’t card at the door.
Hell, they didn’t card at the bar. No one needed to. Every- one in Durango Point knew everyone else. Back then, if he’d tried to order a beer, old Sully behind the bar would have knocked him into the next week and then waited for him to do it again.
No, Tanner’d gone to the Silver Dollar to dance, listen to the musicians, and pick up girls. Mostly the last, though he’d done his fair share of the first two.
Shutting off his vehicle’s engine, he glanced at the bag on the floor of the truck. He’d traveled light. If he wanted to kick back and have a beer, he could grab a room at the Triple B—Belle’s Brake and Bed. The hotel boasted ten rooms, all clean, and always inexpensive for locals, especially if they needed to sleep one off.
I can drive out and see the Colonel in the morning.
He’d signed his papers, finished his exit interviews, and spent weeks getting his affairs in order before flying home to another set of interviews and civilian life. Parched from the drive, he deserved one evening of rest before he tackled the issue of the Colonel. Decided, he locked up his truck and headed inside, a cowboy hat serving as his cover. His head felt too damn naked outdoors otherwise.
Inside the bar, he paused to draw in a deep breath of sawdust, beer, grilling meat, traces of perfume, and a hint of sweat. A handful of dancers stomped, twisted, and turned to the country music blaring from the old-world jukebox in the corner. The tinny strokes of a needle on a record playing offered a welcome no MP3 could ever replicate. About half the tables in the bar were filled with couples, families, and friends, while the bar itself only had one other occupant. A glance at his watch said it was just after six—it was still early. Nostalgia twined with whimsy, and after years in foreign countries, firefights, and following orders, he was home.
Just another evening in Texas. Grinning, he tugged off his hat before crossing the hardwood floor to the bar. If he’d thought the exterior was familiar, the interior seemed to have been frozen in time. The years washed away with every step until he set his hat on the bar top.
Sully glanced in his direction. Tall, broad-shouldered, and beer-bellied, the grizzly bear of a man boasted more gray hair than brown. His craggy face split into a grin as he reached into the refrigerator below. “You still drink American, right, boyo?”
“Well, Mexican.” He answered the older man’s joviality and tapped the bar. “Corona, two limes.” Why not live large? A wide, open grin was akin to a backslapping hug on Sully’s part. Time and distance shrank in the time it took Sully to pull the drink from the refrigerator case.
The bottle slid into place on the old weathered bar top, the wood stained and well oiled over the years. The stories it could tell. Limes slid into the bottle’s neck, the icy beer foamed at the top when the citrus hit it. A basket of hot peanuts joined the beer.
“How long has it been, Tanner?” Sully knew him. Hell, Sully knew everyone in Durango Point. Sully’s grandfather had opened the Silver Dollar after World War I. Sully’s father grew up, left to fight in World War II, and then later, Korea. Sully did his share in Vietnam and lost a son in Beirut. Like the Wilks, the Johnson family served their country, and most of the time, they returned to the Silver Dollar.
“Too long, sir.” He slid onto the cracked vinyl barstool and raised his bottle to him before taking a drink. “Good to be home.”
The man thumped the bar, then hit the bell behind him. “Welcome home to our boy—one round of drinks for every- one on the house!”


A roar rose from the still-thin crowd, laughter, and an echo of welcome. He didn’t know everyone anymore, but he didn’t have to. In Durango Point, no one was a stranger. Heather Long is a national bestselling author who likes long walks in the park, science fiction, superheroes, and Marines. Her books are filled with heroes and heroines tangled in romances as hot as her native Texas summertime.

Posted by Naughty and Nice Book Blog at 7:46 AM