The One Real Thing by Samantha Young 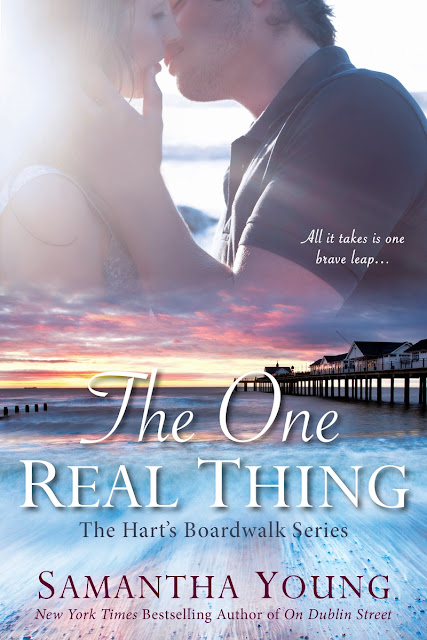 THE ONE REAL THING by Samantha Young
Blog Tour Information

Welcome to Hartwell, a quiet seaside escape where uncovering old secrets could lead one woman to discover the meaning of a love that lasts…

While Doctor Jessica Huntington engages with the inmates at the women’s correctional facility where she works, she’s always careful to avoid emotional attachments in her personal life.  Loss and betrayal taught her that lesson long ago. But when she comes across a set of old love letters in the prison’s library and visits the picturesque town of Hartwell to deliver them to their intended recipient, she finds herself unable to resist the town’s charm—and her attraction to the sexy owner of a local bar proves equally hard to deny.

Since his divorce from his unfaithful ex-wife, Cooper Lawson has focused on what really matters: his family and the boardwalk pub they’ve owned for generations.  But the first time Jessica steps into his bar, Cooper is beyond tempted to risk his heart on her.

Yet as their attraction grows hotter and Jessica remains stubbornly closed off, he begins to realize it will take more than just passion to convince her there’s only one real thing in life worth fighting for…

This book started really slow for me. I had a hard time getting into it. There are some great parts but not enough to keep me interested. When I start a good book, I have a really hard time putting it down. That didn't happen for me with this one. I do love the attraction between Cooper and Jessica but there was so much drama and for them being in their 30's I feel like it should all have been worked out differently.

The book was very well written and I think the next one will be better so I will continue to follow Samantha Young but this one just did not hold my interest.

First off, let me start with this cover. OMG, I am in love with it. I think it is absolutely stunning.  I fell in love with it the first time I saw it a few months ago.

Now onto the book..... I went into this book blind. I did't read the blurb, I wanted to read it because of Samantha. I have read a few of her others and loved them.

Let me start off by saying that I felt the story did start off a little slow. BUT..... Let me say that I did feel the connection between the characters. Jessica is a doctor at a women's correctional facility in Wilmington, DE.  I found this quite interesting, since I don't live too far from Wilmington, DE.  Jessica is searching for something in her life. She isn't happy and it is clear to us readers that she isn't. We know she is keeping something hidden from everyone around her. Every one in life has secrets. Some may be bigger than others. But it is up to us on how much we want to divulge when we get into a new relationship.

Jessica goes on vacation, time just to get away, when she stumbles upon someone on Hart's Boardwalk, a popular vacationing area in Delaware.  Cooper owns a bar on the boardwalk called Cooper's. It appears that Cooper has some issues of his past that he is dealing with.  But what happens when the two of them meet and an instant connection is formed.  Will Jessica keep Cooper at arms length? Will she let him in or will she keep her wall up?

When Cooper and Jessica begin to spend time with each other, Cooper realizes that she refuses to talk about her childhood, or her family.  Does Cooper push the issue or wait for Jessica to open up on her own?  If and when Jessica reveals what it is she is hiding, will Cooper be able to accept it?  Will Jessica risk her heart to Cooper or will she continue to run?

I enjoyed this book. I liked how the author built the relationships between the characters. I only wish that I found out what Jessica was hiding earlier in the book. I think it would have helped me understand her a little better, rather than becoming annoyed with her at certain points throughout the book. I think I was drawn more to Cooper for being open with Jessica Cooper wore his heart on his sleeve and I didn't want to see him get hurt. But we all know, that in order for love to grow, sometimes we need a little patience for it to happen.

Why did it feel like having sex had complicated things so much? Usually sex was complication-free for me. But before that night I’d been completely sure that Cooper was interested in exploring something more with me, and now I was freaking out that his interest would wane now that he’d had me.
I shook my head slowly. “No. It was good.”
He scowled, his arms tightening around me so much there wasn’t an inch of space between us. “It was better than fucking good, Jessica.”
I scowled back and pushed at his chest for some breathing space. “Well, I’m sure you’d know all about that.”
“What the fuck does that mean?”
“You use the word ‘fuck’ a lot.”
“It’s a good fucking word.”
I was tempted to laugh at how disgruntled he sounded and he seemed to catch my amusement because his hold on me eased.
“What’s going on in your head, Jess?”
I thought about evading this conversation. I’d never had to have an adult, open conversation with a man about sex. However, I realized, somewhat reluctantly, if I wanted something more with Cooper Lawson I was going to have to give him more than I was used to giving.
I couldn’t change his past, but I could figure out what it was he wanted in the future by just being honest and asking the question.
“You still want something with me, right? This”—I gestured behind me to the table—“it wasn’t just about sex.”
“No,” he said. “It’s not just about sex.”
As I heaved a sigh of relief, he let go of my waist to cup my face in his hands, dipping his head down to mine so our noses almost touched. He stared deep into my eyes and I shivered. I felt like he was trying to see right into my soul.
“I’m in this for the long haul, Doc. I was before you walked into my bar tonight, but now, after the best fucking sex of my life, after how wild that was, there’s no way I’m letting you walk out of here without me.”
And there he went doing it again.
His words resonated deep within me along with giving me that deep, sexual belly flip of arousal.
My fingers curled into the top of his biceps. “Best sex of my life, too,” I murmured. “It stunned me a little. Confused me . . . I thought maybe . . . you . . . this was old hat for you . . .”
He gave me a crooked grin. “You think I make a habit of fucking women in my bar.”
“You could,” I said. “You are definitely a man who could pull that off.”
Cooper threw his head back in laughter and I pressed my body deeper into his to feel his joy.
And then he wrapped his arms around me and hugged me.
Just as I’d suspected, he was a really good hugger.
When he pulled back he was smiling gently at me. “You’re the only woman I’ve had in my bar.” He let me go only to take my hand in his. “No one sits at that table anymore.” He gestured to the scene of the best sex we’d both ever had. “It’s now a shrine.”
“You can’t do that!” I was mortified at the possibility of people finding out why there was a table in Cooper Lawson’s bar that no one was allowed to sit at.
“I can. It’s my bar. I think I’ll even carve ‘Coop and Doc were here’ on it.”
Finally getting that he was joking, I made a face. “Funny.”
“You’re slow on the uptake tonight,” he teased.
“My brain was just frazzled by the orgasm to beat all orgasms.”
He squeezed my hand. “You up for more brain frazzling?”
I shivered at the thought. “Definitely.”
His eyes darkened. “Let’s go back to my place.”
Exhilarated by the prospect, I followed him, and it wasn’t until we’d stepped outside the bar into the cool night air that I said, “I don’t suppose you know where my panties are?”
“I do, actually.” He led me to the back of his bar to the parking lot. A dark-colored GMC was the only truck there.
“Um . . . could I have them, please?”
He stopped me at the passenger side of the truck, pressing me up against the car. “Why?” he whispered against my lips before he kissed me deeply. He came up for air a few seconds later. “You’re not going to need them where we’re going.”
The nagging pressure between my legs increased. “You are so very, very good at stringing the exact right words together.”
He kissed me again.
“You’re just good with your mouth in general,” I murmured.
Cooper grinned and brushed his lips over mine. “In the truck, Doc.”

Samantha Young is the New York Times and USA Today bestselling author of the On Dublin Street series, including Moonlight on Nightingale Way, Echoes of Scotland Street, and Fall from India Place, as well as the standalone novel Hero. She resides in Scotland.

a Rafflecopter giveaway
Posted by Naughty and Nice Book Blog at 9:17 PM