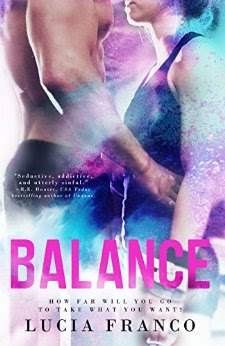 Synopsis:
Adrianna Rossi is no stranger to the rigorous demands required of her body. Years of pain and determination make her one of the best. Olympic glory is the ultimate goal, and she'll do anything to achieve it. Even if that means leaving home to attend World Cup Academy of Gymnastics, a training center that serves one purpose—producing champions.

Perfection, precision, and dedication are required of his athletes. When two time Olympian Konstantin Kournakova is persuaded into training the young hopeful, he immediately regrets it. She doesn't come close to his high standards. As the relentless pursuit of her dream keeps her striving, a passion is ignited within him.

Kova's power and domination, coupled with Adrianna's fierce tenacity, reveal there is more for her body to learn. Every interaction can be misconstrued, but there’s no mistaking the darkening of his gaze, the lingering of his touch, or the illicit image of his bare skin pressed against hers. Integrity is on the line. One toe off the beam and their forbidden desires could ruin everything they’ve worked for, throwing it all off balance.

Balance is not a book for the faint of heart. It truly is that forbidden book. Lucia takes you and pushes you to the limits of all limits with Balance. I was completely torn while reading this book. I know I shouldn’t like it, knowing the age difference between Adrianna and Kova Her 16 to his 32 but you can’t help but love it. Lucia’s writing just captivates you from the very beginning. It’s raw, intense and so wrong all at the same time, you won’t want to put the book down.

Adrianna Rossi sleeps, eats and breaths gymnastics and we feel it by the way the story is written. You just can’t help but cheer her on and want her to succeed. Her father is your typical workaholic who adores her and gives her everything she could want and her mother is your typical self-centered socialite. Because of this, Adrianna is not your typical teen. She is rather mature for her age as she has had to care for herself for quite some time.

“I will practice until I can’t get it wrong, until my hands are bleeding and my feet are raw. I’ll go to the Olympics and nothing is going to stop me.”

Adrianna is dedicated to the sport of gymnastics so much she moves away from her family and friends to a new gym to train. Enter Coach Kova. Upon first meeting of him you get that asshole vibe from him but being a two time Olympic gymnast, he knows his stuff. It’s as if he is walking around with a stick up his ass. According to him, Adrianna is behind from the other girls. He catches all the little mishaps that she is doing and she needs to train harder to better improve herself. This discourages Adrianna since she seemed up to par with her last gym. Kova is completely strict with his rules. He pushes her to her limits but Adrianna will not break. She works to the point where she will work extra hard and wear herself out to be a better gymnast. Thinking longer hours and private coaching will better help her, they spend countless hours together. Little do they know all that extra time may be their breaking point.

Are they willing to risk both their futures for the unknown??

“You are my greatest weakness. From the moment I set eyes on you, I have been fighting my attraction.”

Even after all this time I’m still trying to wrap my head around this book. Kova and Adrianna have an unusual relationship. I love it, yet I know I shouldn’t. It starts off so completely innocent, like they all start off at first. But after so much private time spending with each other, they start to open up to one another especially about their personal lives. I mean, its okay for Adrianna since she is a minor and she has no one else nearby, but for Kova, he just seems so comfortable with her. Telling her things he shouldn’t be. It just naturally spills out of him. Their attraction for one another is undeniable. Glances every so often, subtle touches, to lingering touches, and add the talks and the more private time together. At first they deny the attraction. They try so very hard. They know it is so wrong. Kova knows it is so extremely wrong. But Adrianna makes it so hard when she can’t seem to stop wanting him. She pushes so hard to want him, he can’t seem to deny it any longer. It’s hot, its fire, and so wrong at the same damn time. You may want to take a break after you read this stuff for a breather.

“I find myself drawn to you explicitly. Like a moth to a flame.”
“It is true, think about it. I am the moth, you are the flame. It is and irresistible attraction that will end in total destruction.”

They both are fighting their feelings knowing it is so wrong to be together, but yet they can’t deny what they feel. You will definitely find yourself liking Kova at times. Then times where you will want to gut the hell out of him. You don't know what to do with yourself at the end of this.  I won’t deny it. Hayden is another gymnast in this book who befriends Adrianna when she has no one else. I loved how sweet and tender he is with her and I wished she chose him instead. Plus their age difference seems much more reasonable. But you never know! I’m personally rooting for Team Hayden on this one. I’m definitely crossing my fingers she changes that story line LOL. I loved this book. I loved the story line. I loved the writing. Lucia just takes you to a whole new place with this story and she pushes every single one of your boundaries with it. You may not want to read some parts but you will. You can’t help but want to. You’re not going to want to put this book down. When you get to the end though…you’re going want to cry because you’re going to want more and she doesn’t have more…. Yet….

A competitive athlete for over ten years, Lucia Franco currently resides in sunny South Florida with her husband