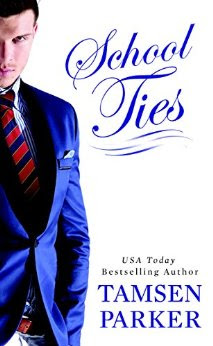 Erin Brewster is nervous enough on her first day of teaching at Hawthorn Hill. But the way Zach Shepherd looks at her with his dark and dreamy blue eyes really throws her off her game. He simply has to walk past her to send her heart racing. Although he’s eighteen and a senior, he’s still just a student—and very off limits. To let her eyes linger over his body, to fulfill her fantasies would be more than inappropriate. It would be career suicide.

Three years after his graduation from Hawthorn, Shep has returned as a member of the faculty—and he hasn’t forgotten his favorite teacher, the prettiest woman he’s ever seen. When they finally have a chance to get to know each other, they realize they share a common interest: kink. In fact, Shep has learned a lot about the subject during his time away and is ready to teach Erin a thing or two. He’ll soon have her begging to be held after class.

As their relationship comes under scrutiny, the ties that bind Shep and Erin may begin to fray. But some bonds grow stronger under pressure...

School Ties was a cute, quick and fast read for me. It’s not one that is completely forbidden so it won’t give you that weird vibe while reading it when you think teacher/student books either. Erin Brewster has always loved being in Hawthorn Hill and has come back to teach there. She is a young teacher, keeping in mind it’s an all-boys school. Enter Zach Shephard. The one boy that makes her heart race, the one that makes her back tingle when her back is turned and the one that looks at her with longing in the classroom. Erin has never felt anything like this before. She knows he is off-limits which is why she does nothing to these feelings she is having towards him.

Zach is different than all the other guys in the school and has to work for every single little thing he has. When he spots Erin he only wishes he can have her too but knows it is impossible. She is his teacher and nothing will come of it. That and he has nothing to offer her. Absolutely nothing. He is just a poor boy going to Hawthorn on a scholarship. One can only hope though.

Erin has made many mistakes in her life and getting involved with a student will not be one of them. Her life is on the Hill and even thinking of Zach would get her off of it real quick. So she makes other mistakes that land her in much bigger situations. One that she has to live and deal with. But when Zach comes back years later, he wants to avoid her. He can’t control himself with her. Don’t get it wrong, he truly wants to be with her but he doesn’t feel as if he is right for her. Zach isn't the same person he was those years ago. He has learned a lot and he is afraid that once he gets ahold of Erin, she may not like who he has become and he cannot stomach that.  Erin is still sorting herself out while he is still making a life for himself. But when Zach is the only person that Erin has to turn to it brings them closer to one another. They realize they have more in common than anything. She really isn’t that quiet and reserved person that he once left behind. She has a side to her that he wants to explore. A side that he needs to get out. When they finally get together, it’s as if they have been together forever. The connection they have had all those years has never gone away. And let me just say what Zach has learned, was well worth the learning.... HAWT! He is pretty much making all her fantasies come true. And he quickly learns that there is a side to Erin that is hidden so well. Being together isn't wrong. But Erin still has reservations about them being together because of what others would think since he was once her student. She knows it is not appropriate now, but it still bothers her.

Will the thoughts of everyone be enough to risk their new relationship? Or will their love be strong enough to keep them together?

This starts off nice and cute but then it takes a different turn and it gets super steamy in the middle of it. You don’t expect that so it’s a nice surprise.  Grown up Zack is…..hmmm…. you will definitely like a grown up Zack that’s all I will say.

Tamsen Parker is a stay-at-home mom by day, USA Today bestselling author of erotic romance writer by naptime. She lives with her family outside of Boston, where she tweets too much, sleeps too little and is always in the middle of a book. Aside from good food, sweet rieslings and gin cocktails, she has a fondness for monograms and subway maps. She should really start drinking coffee. You can learn more about Tamsen on www.tamsenparker.com, follow her on Twitter at @TamsenParker or Pinterest at TamsenParker, or Like her on Facebook at www.facebook.com/tamsenparker.
Posted by Naughty and Nice Book Blog at 10:00 AM