RELEASE DAY REVIEW~ UNDER THE LIGHTS by Abbi Glines 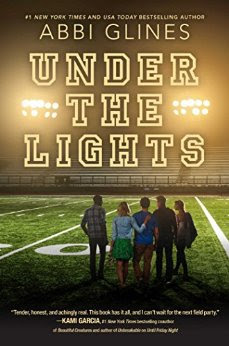 In the follow-up to Abbi Glines’s #1 New York Times bestseller Until Friday Night—which bestselling author Kami Garcia called “tender, honest, and achingly real”—three teens from a small southern town are stuck in a dramatic love triangle.Willa can’t erase the bad decisions of her past that led her down the path she’s on now. But she can fight for forgiveness from her family. And she can protect herself by refusing to let anyone else get close to her.High school quarterback and town golden boy Brady used to be the best of friends with Willa—she even had a crush on him when they were kids. But that’s all changed now: her life choices have made her a different person from the girl he used to know.Gunner used to be friends with Willa and Brady, too. He too is larger than life and a high school football star—not to mention that his family basically owns the town of Lawton. He loves his life, and doesn’t care about anyone except himself. But Willa is the exception—and he understands the girl she’s become in a way no one else can.As secrets come to light and hearts are broken, these former childhood friends must face the truth about growing up and falling in love…even if it means losing each other forever.

I have mixed feelings about this one, which is hard for me to say because Abbi is one of my favorite authors. I won’t deny though, that some parts in the book had me searching for a tissue, she is definitely good at that. I was able to place myself in there with the characters. Abbi did leave you guessing throughout the book wondering what will happen and she will keep you on your toes.

"No one wants the truth when it doesn't suit. They prefer to weave lies and life in them. It's the way of this place. God knows why i came back."

They are now older and now in high school and they are all different people. Willa has to start her life over again while not knowing where she fits in. Both Gunner and Brady have promising futures ahead of them, Willa, not so much. So she is warned by her grandmother to stay away from them. That she should not influence them in doing anything bad.

"I swore I lost her to Brady, I'd never love anyone else again. I would only love me. I trusted me."

As Willa slowly finds who she is again their friendships are forming back once again. This time though both of the guys want Willa but differently. Brady is the innocent one in the group, the one who has the perfect life while Gunner has the total opposite. His is a total lie. Though Willa is more attached to Gunner because she can relate to him more. She opens up to him more. Gunner knows exactly how she feels and vice versa. This baffles Brady because she should be running to him instead. As much as he tries to get close to Willa she seems to be holding back from him. Plus Brady has his own lady problems of his own. Willa and Gunner form and easy friendship once again. Baring each other secrets no one else has ever known. They are closer to each other now than ever before. No matter how dark it is, they are there for one another.

"Love wasnt real. It was a fleeting emotion that confused you them destoryed you in the end. You couldn't trust people. The moment you loved them, they had the power to hurt you."

But what happens when the secrets are so deep that it will ruin each other? Will the other just give up and run? Or will they stick it out for one another? What will happen with the friendship with the three of them? Will it end it or can they continue being friends?

I felt like this story felt a bit short for me. Like it was a bit all over the place. Abbi did give us some things that kept us guessing and on our toes throughout the book but from the middle of the book towards the end I felt like it started to go a bit downhill and that’s a bit disappointing for me. There were so many unanswered questions that I was left with at the end of the book and the ending was just that, the end. It felt completely rushed as if she was just trying to end it. I thought that with everything that they had done to get through what they needed to do the ending would be a bit better but it was a dud in my book…it just ended. This book just didn’t follow up as nice as I would have loved after West’s book. I’d still give this a 3.5 star.

Abbi Glines is a #1 New York Times, USA Today, and Wall Street Journal bestselling author of the Rosemary Beach, Sea Breeze, Vincent Boys, Field Party, and Existence series. She never cooks unless baking during the Christmas holiday counts. She believes in ghosts and has a habit of asking people if their house is haunted before she goes in it. She drinks afternoon tea because she wants to be British but alas she was born in Alabama. When asked how many books she has written she has to stop and count on her fingers. When she’s not locked away writing, she is reading, shopping (major shoe and purse addiction), sneaking off to the movies alone, and listening to the drama in her teenagers lives while making mental notes on the good stuff to use later. Don’t judge.

You can connect with Abbi online in several different ways. She uses social media to procrastinate.
Posted by Naughty and Nice Book Blog at 11:00 AM