(New York, NY – August 12, 2014) – Are you ready for more sexy angst from Abbi Glines, New York Times bestselling author of the Rosemary Beach series? Wait no more. Abbi is releasing two new books in 2015 you definitely don't want to miss — especially if you're a longtime fan of her passionate Southern dramas – and PopSugar Love & Sex has the exclusive covers and a brand new excerpt to tide you over until April...

WHEN I’M GONE (on sale April 7, 2015) follows the burgeoning romance between Reese Ellis and Mase Colt-Manning. Reese is a vivacious, beautiful young woman with a past damaged by the abuse of her mother and stepfather. She escapes to Rosemary Beach to start a life of her own, cleaning houses for the town's elite. Mase, on the other hand, is a born-and-raised Texan striving to live a humble life as a rancher, despite his father being a famous rock star. When he comes to visit his family in Rosemary Beach, the two cross paths.

The second book in the series, WHEN YOU’RE BACK (on sale June 30th), also follows these two lovers, but things get tense when Mase’s family friend comes to town with an agenda that doesn’t make life easy for Mase and Reese’s burgeoning love. 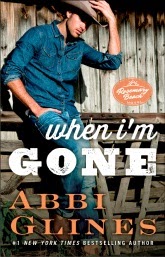 From #1 New York Times bestselling author Abbi Glines comes a steamy new adult novel in the Rosemary Beach series, in which we meet Mase, a Texas heartthrob (first introduced in Take a Chance) who comes to Rosemary Beach to stir things up.

“I had an urge to fix all her problems. Which was stupid. She was doing fine without me. But something about those big eyes…”

Mase Colt-Manning has always preferred his humble life as a Texas rancher to his birthright as the son of a legendary rock star. In fact, he rarely visits his father’s rarefied world in Rosemary Beach, especially if it means bunking at his vile half-sister Nan’s house—until one visit leads to a chance encounter with a young, gorgeous house maid who awakens him with her off-key but spirited imitation of a country music star…

Reese Ellis finally has her freedom. After escaping a lifetime of abuse from her parents and classmates for an undiagnosed learning disorder, she seizes the opportunity to be a house maid to some of the richest families in Rosemary Beach. But her job is in jeopardy when she causes an accident at the home of her most important client, Nan Dillon. When a hot, half-naked stranger with a cowboy’s swagger comes to her rescue, she’s intrigued—then afraid once he shows his own interest. Reese has never met a trustworthy man in her life. Will Mase be any different? 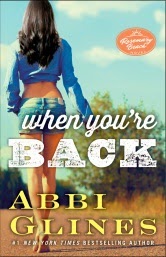 From #1 New York Times bestselling author Abbi Glines comes the next new adult novel in her beloved Rosemary Beach series, which continues the story of Mase and Reese from When I’m Gone.

The future is bright for Reese Ellis. She has Mase Colt-Manning, the man of her dreams, and a family she didn’t know existed until her long-lost father arrived on her doorstep in Rosemary Beach. After growing up with a cruel mother and abusive stepfather, Reese is eager to get to know the caring and charming man who wants to be a part of her life. Everything is finally falling into place.

While Reese is visiting her new family in Chicago, Mase spends time with his “cousin,” Aida, who has worshipped him since childhood. Though they’re unrelated by blood, Mase and Aida have been raised to think of each other as family. But when Reese returns, she can tell something isn’t quite right with Aida, who clearly resents Reese and excels at manipulative little games. And though Mase is unsuspecting, Reese knows Aida doesn’t love him like a cousin should…

Posted by Naughty and Nice Book Blog at 3:21 PM