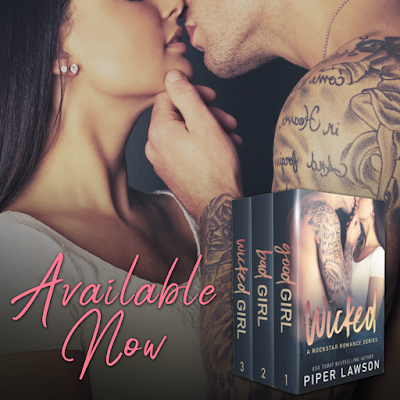 I wanted to fall for a boy. Instead, I fell for a legend...
Jax and Haley's addictive rockstar-meets-nerd romance trilogy has sold more than 100,000 copies - and it's in ONE PLACE for the first time! Books 1 and 2 contain cliffhangers that build to book 3's in an explosive, unmissable HEA! Immerse yourself in hours of smoldering tension and enthralling romance that promise to leave you "dazed and a little crazed."

GOOD GIRL (Wicked #1):
I wanted to fall for a man. Instead, I fell for a legend...
The month I wrote my first piece of code, Jax Jamieson launched his third platinum album.
The week I drank my first beer, he spent in jail.
The day I got under his skin, I wound up on his tour.
And the night he gave me his hoodie… I fell in love forever.

BAD GIRL (Wicked #2):
Rockstar’s don't chase college students.
But Jax Jamieson's never followed the rules.
I thought I knew Jax's secrets. I was wrong.
When the fans go home and the lights fade to black, it's just me and him and the people we left behind.
I want to escape, until I realize...
We can do a lot in the dark.

WICKED GIRL (Wicked #3):
He was a legend, until he walked away.
I was nobody, until I was dragged into the light.
I was never supposed to be part of Wicked, but it was always part of me.
Now it's my turn to do something that matters.
Even if the man I love hates me for it.

iper Lawson is a USA Today bestselling author of smart, steamy romance! She writes about women who follow their dreams (even the scary ones), best friends who know your dirty secrets (and love you anyway), and complex heroes you’ll fall hard for (especially after talking with them). Brains or brawn? She’ll never make you choose. Piper lives in Canada with her tall, dark and brilliant husband. She believes peanut butter is a protein, rose gold is a neutral, and love is ALWAYS the answer.

Posted by Naughty and Nice Book Blog at 9:55 AM