I Hate You by Ilsa Madden Mills 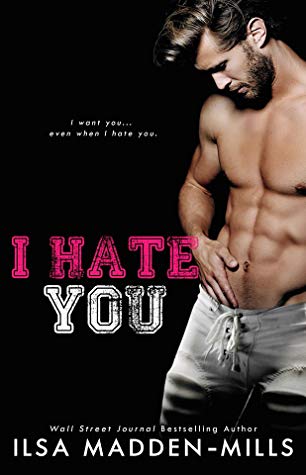 There’s a fine line between I hate you and I want you.
Once you cross it, there’s no going back.Blaze Townsend: I hate you.Charisma Rossi: I hate you more.She’s been expecting this ever since their latest showdown. She had good reason.Hottest guy she’s ever seen.Former fling.Dumped her in front of all her friends.At her own party.So no, she’s not about to forgive and forget just because he sits next to her in class. He thinks all he has to do is turn on those baby blues, and she’ll melt right back into his arms. Please.She’d be crazy to let this cocky player affect her again. (Tell that to her body.)

Ilsa captures us again with this spirited enemies to lovers and second chance romance. It’s filled with witty responses, plenty of snark and enough tension to melt your socks off.

He’s a football player, the hottest guy on campus and he was hers...sort of...until he dumped her at her own party. She’s feisty, she’s scorned, she wants revenge,
and she still wants him.

“...I give him my own Miss America wave - only it’s really a one-finger salute.”

He’s hot and he’s cold. It goes back and forth, over and over again. He wants her but he has his own battles to deal with. Under the swagger, the chiseled muscles and the sexy edge, he’s damaged, hurting and he doesn’t think he can have both. He’s been the only one he can ever count on.

She tries to stay strong. He’s hurt her once before but she wants him, all of him. He tries to push her away, to not let her in, but he wants her, all of her. It could be the most important game of their lives. She is the fire in his hands and he knows that she sees him, always.

“Because once you know a girl sees you for the man you are, once you know she’s never leaving, she wants you forever, and she’ll take a chance on you, it’s easy to let the words out.”

“She knows my heart. Her name is written there.”

Another fantastic romance from Mills. You want this book! This is a definite one-click that will leave you with a smile on your face and happiness in your heart
Posted by Naughty and Nice Book Blog at 9:21 AM