If I Only Knew by Corinne Michaels 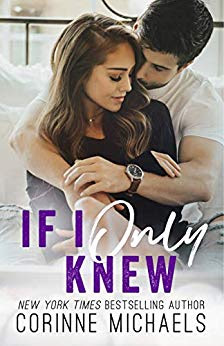 New York Times bestseller Corinne Michaels brings a new heartwarming second chance at love standalone romance.My life was perfect – until a shocking tragedy pulled the rug out from underneath me.My children were left without a father. I was without a husband and a provider. Instead of wallowing in my grief, I buried myself in my work at Dovetail Enterprises. Landing the promotion as the CEO’s right hand was exactly what I needed.Getting saddled with Milo Huxley as an assistant is exactly the opposite.I can’t stand him.He’s arrogant, irresponsible, and out for my job. As if that’s not bad enough, he has to be devastatingly sexy, and have a posh English accent that makes me squirm on top of it all. I’ve had enough unpredictability for one lifetime, thank you.But soon enough, we’re fighting less and laughing more. He’s there for me when no one else is. And those good looks aren’t the only panty-dropping thing about him.If I only knew what to do about it . . .

Somehow I didn't manage to read Not Until You, where we meet a man named Callum who seemed to sweep Nicole off her feet.  In this book, If I Only Knew, we meet, Callum's brother, Milo.  I am only telling you this, so you know that you CAN read them as a standalone and not feel like you are lost.  I now have to go back and see how I missed the other book on my kindle.  Ok, so enough rambling, let's get to the review.

Corinne takes you on an emotional rollercoaster, one that will have you crying happy tears, laughing through tears, then crying tears.  Danielle is delivered tragic news, news that will change her life, and her future.  Milo arrives in the United States after months of not speaking to his brother, Callum and is looking to have his old position back.  What he doesn't know is that the position was already filled.  Things begin to get tricky with Milo arrives and sees WHO the position is being held by.

Milo thinks he can charm the pants off any woman, but Danielle sees him for who he is and what he is.  Lines begin to blur between the two of them.  Feelings begin to develop, hearts begin to race, rules are going to be broken, as so will some hearts in the process.

Be sure to ONE-CLICK If I only Knew and find out what happens for yourself.

There are four standalone novels in The Second Time Around Series.
We Own Tonight (Heather & Eli)
One Last Time (Kristin & Noah)
Not Until You (Nicole & Callum)
If I Only Knew (Danielle & Milo)

Posted by Naughty and Nice Book Blog at 1:07 PM