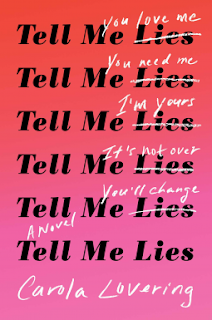 Lucy Albright is far from her Long Island upbringing when she arrives on the campus of her small California college, and happy to be hundreds of miles from her mother, whom she’s never forgiven for an act of betrayal in her early teen years. Quickly grasping at her fresh start, Lucy embraces college life and all it has to offer—new friends, wild parties, stimulating classes. And then she meets Stephen DeMarco. Charming. Attractive. Complicated. Devastating.

Confident and cocksure, Stephen sees something in Lucy that no one else has, and she’s quickly seduced by this vision of herself, and the sense of possibility that his attention brings her. Meanwhile, Stephen is determined to forget an incident buried in his past that, if exposed, could ruin him, and his single-minded drive for success extends to winning, and keeping, Lucy’s heart.

Lucy knows there’s something about Stephen that isn’t to be trusted. Stephen knows Lucy can’t tear herself away. And their addicting entanglement will have consequences they never could have imagined.

Alternating between Lucy’s and Stephen’s voices, TELL ME LIES follows their connection through college and post-college life in New York City. With the psychological insight and biting wit of Luckiest Girl Alive, and the yearning ambitions and desires of Sweetbitter, this keenly intelligent and staggeringly resonant novel chronicles the exhilaration and dilemmas of young adulthood, and the difficulty of letting go—even when you know you should.

This is the first book of Carola Lovering, that I have read. So let me share my thoughts.  Tell Me Lies starts bounces from the present to the past throughout the entire book. It starts off in the present where Lucy is heading to New Jersey to be a bridesmaid in one of her closest friends wedding. A friend she met while in college and stayed in touch after they both graduated.  Lucy is excited to see her friend get married, but she isn't excited about seeing a certain person from her past....  insert STEPHEN.

Lucy and Stephen have a past. A not so pleasant past might I add. Lucy settles for second best, or so I thought. However, in Lucy's mind, Stephen loved her. At least he told her that. Stephen is one of those guys that you want to kick in the balls throughout the book. He is a narcissist. He loves himself, and is so self absorbed. But yet, he seems to attract all the ladies. He plays women like a fiddle, Lucy being one of his favorite instruments.

Throughout the book, Lucy falls into Stephen's trap. No matter how many times he hurts her, she continues to go back for more. This being one of the biggest problems in the book for me. I hate seeing Lucy fall victim to Stephen time and time again. While Lucy was in college, she changed. She wasn't the same girl that entered her freshman year. Grant it everyone changes while we grow, while we evolve into adulthood. But Lucy didn't change for the better. She grew distant from her friends. She began to lie more frequently. Why?  All because she didn't want her friends to share their opinions with her. To tell her that Stephen was only going to continue to hurt her. Instead, she continued to allow Stephen to her more lies.

I wanted Lucy to change. I wanted Lucy to be strong. I didn't care for the ending of the story. I felt like Lucy only realized what a manipulative monster Stephen was, was in the last few pages of the novel. She finally had a revelation at the very end.