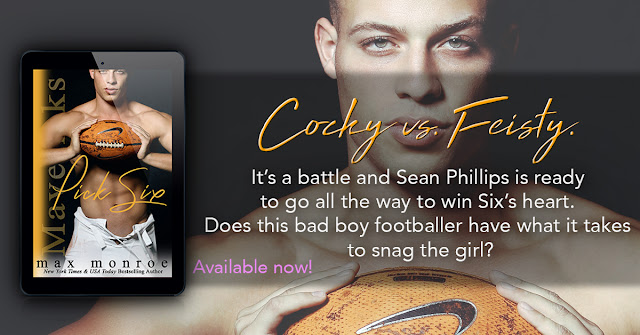 Sean Phillips is a sexy as sin enigma.
Cocky. Promiscuous.
The New York Mavericks star wide receiver.His quick moves and sure hands extend way past the lines of the football field—and into the bedroom. Sure of himself and sure of his life, Sean’s convinced he can handle anything. But when beautiful, pint-sized Six Malone delivers a challenge he’s never faced before, his certainty starts to waver.**Six Malone is a force to be reckoned with.
Feisty. Hilarious.
The popular YouCam vlogger Pick Six. The chance to work with the Mavericks on an eight-episode vlog series is the opportunity of a lifetime, and Six knows it.But after an interesting first encounter turns into a head-to-head battle with cocky football star Sean Phillips, her attention shifts—to keeping herself from falling in love. Too bad spending time with the team is part of the job, and Sean has a flawless track record…of getting what he wants.**Pick Six: A term used when a quarterback throws an interception and a defensive player returns it for a touchdown, resulting in six points.Pick(ing) Six: When a man-wh*ring baller meets his match. 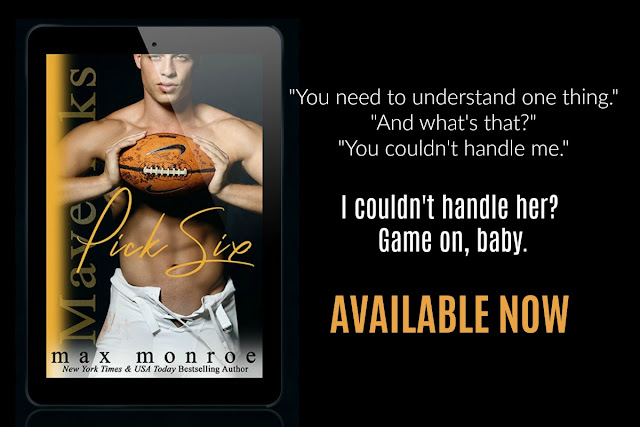 I LOVED Pick Six.  I'm not sure who I enjoyed more, the cocky, arrogant, Sean Phillips, or the feisty and smart mouthed, Six.

These two were a match made in heaven. Both of their outgoing personalities were a huge hit for me. Sean Phillips is known to be a manwhore. Sean lays his claim on Six, he practically lifted his leg and peed on her, to keep his fellow team mates away from her.

Six hearts Sean's claim and ups her game. She will teach Sean to have a little humility. And let me tell you, the games she plays with Sean will have you laughing your asses off.

Six vows not to fall for the the playboy. She vows that she will not fall victim to his sexy body, his defined abs, or his HUGE penis.  She will not fall under the trap of Sean's penis.
Although, she says it is a beautiful penis deserving it's own thrown.

When Six and Sean begin to spend more time together, their playfulness is turned up a notch.  Will they give into temptation? Will Six go back on her promise to herself and sleep with Sean?  Will one time together be enough for either, Sean or Six?  Will the two of them develop feelings for each other?

Can the manwhore change his ways?  Does he even what to change his whoring ways. He has one focus in life. FOOTBALL. Women complicate things. He prefers to have meaningless sex and not commit to anyone.  After spending so much time with Six, will his feelings change on the idea of a relationship?  Can Sean Phillips be a one woman guy? Will Sean win Six's heart?  Is Sean ready to go all in, in order to win the girl?

I devoured this book in one sitting. I loved Sean. I wasn't sure if he could top Quinn "QB", but he came close. I loved Sean's cocky attitude. He made me laugh. Then there is Six. She knew exactly how to handle Sean. As much as Sean dished out, Six dished it out twofold. Sometimes it takes a special someone to open your eyes. Six definitely did that to Sean.