Blog Tour CAPTIVATED BY HIM by Terri E. Laine

Captivated by Him, an all-new standalone from Terri E. Laine about an imperfect hero and the woman he can't let go is LIVE! 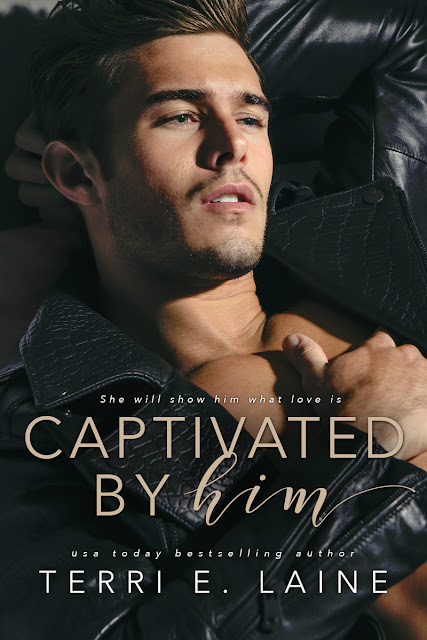 Fate plays matchmaker with my heart by repeatedly putting Gavin Volk in my path. Our mutually insane attraction is instant, captivating me from the first time we meet.

The wickedly gorgeous guy knows how to set my body on fire with just one look.
And he’s there for me like no guy has been before.

Only, he says he’s not boyfriend material, not good enough for me. But he won’t give me
a reason why.

If rumors at our college are to be believed, he's dangerous, connected to the mob. I know he would never hurt me physically, but mentally he's shielded by secrets he doesn't trust me enough to share.

Yet, every time he kisses me, I feel it deep down in my soul.
Just when I think I’ve broken down his barriers, he builds a fortress between us again.

Though I want him.
And I know he wants me.
His secrets keep me far from his heart.

I should walk away with my pride intact.
I can’t keep allowing him in my life only to be shattered when he walks away.
Either he proves his love by trusting me or he needs to let me go for good.

However, my greatest fear is that if he tells me what he's hiding, will I be strong enough to stay?

Gavin captured my attention in Because of Him. We got a glimpse into his life. We saw that there was a connection between Gavin and Megan.  But we didn't know what happened between the two that kept them apart.

Knowing what I know now, I see why Gavin did what he did. Sometimes when you love someone, you need to let them go. Megan's safety meant more that his own happiness. He saw that the 'family' did to those that he loved. Loving someone made them a target.

Not only did Gavin sacrifice himself for those that he loves, his family did as well. Gavin will stop at nothing to protect that he loves.  Gavin doesn't explain any of this to Megan, therefore, Megan grows tired of the cat and mouse game. Megan has been captivated by him from the moment she met him. She was drawn to him, in ways that she couldn't explain. But after months of being around each other, being drawn to each other, Gavin takes a little of what Megan is offering. But that isn't enough for Megan. She wants more. She wants all of Gavin. But when Gavin tells her he can't. that may be the last straw. If he doesn't want her, than he needs to leave her alone. Stop showing up where she is, and stop interfering in her life.

I have to say, I am obsessed with the covers from this series....  OBSESSED. Talk about holy hotness. I can totally envision these two men in the stories.

Kudos to Terri. This series rocks.

“If you want to walk me, you can. But I can make it on my own.”
“Lead the way.”
I had to adjust myself; it was going to be an uncomfortable walk. When I glanced up, I got an eye full of her fantastic ass and had to catch up if I didn’t want fucking blue balls tonight.
When we were side by side, she cast me a look. “And don’t think you’re talking your way up to my room. It’s a boy-free zone.”
I chuckled. “You’ve made your point. Believe it or not, I don’t have to beg.”
It was her turn to laugh. “Your ego knows no bounds.”
“It’s not ego, Angel. It’s a fact. And though you are on a short list of girls who have turned me down since before high school, it’s cool.”
She stopped in front of a red brick building, and now I knew which building held her dorm. I filed that away for future reference.
“Well, it’s healthy you learn that not all women are susceptible to your charms.”
Her warm palm reached up and patted my cheek. I captured her wrist and turned it to press a kiss to the skin at the juncture of her hand and arm.
“Never say never, Angel. I might corrupt you yet.” 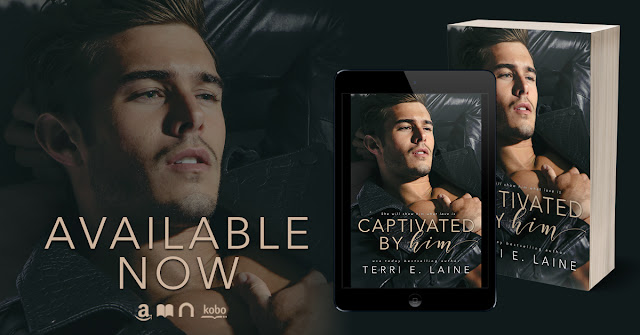 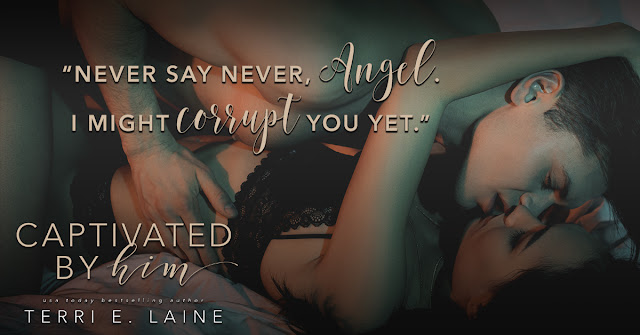 About the Author:
Terri E. Laine, USA Today bestselling author, left a lucrative career as a CPA to pursue her love for writing. Outside of her roles as a wife and mother of three, she’s always been a dreamer and as such became an avid reader at a young age.

Posted by Naughty and Nice Book Blog at 10:33 AM