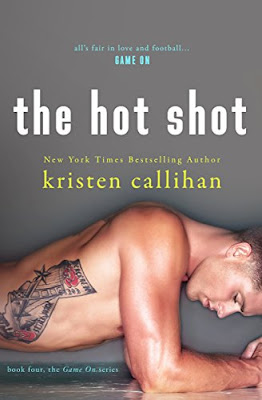 First we were friends. Then we were roommates. Now I want more…

What can I say about Chess Copper? The woman is capable of bringing me to my knees. I know this about five minutes after getting naked for her.

No one is more surprised than me. The prickly photographer my team hired to shoot our annual charity calendar isn’t my usual type. She’s defense to my offense, a challenge at every turn. But when I’m with her, all the regrets and darkness goes away. She makes life fun.

I want to know Chess, be close to her. Which is a bad idea.

Chess is looking for a relationship. I’ve never given a woman more than one night. But when fate leaves Chess without a home, I step up and offer her mine. We’re roommates now. Friends without benefits. But it’s getting harder to keep our hands off each other. And the longer we live together the more I realize she’s becoming my everything.

Trick is… Now that I’ve made her believe I’m a bad bet, how do I convince her to give this player a true shot at forever?

Kristen Callahan does it again with this standalone, Hot Shot. The title does justify it self. When you get to know Finn… just wow. This book completely sucked me in from the very beginning until the very end. It ended up being a very quick read for me. Now go fall in love with Chess and Finn.

I loved Chess and the person who she is. She’s strong, independent, motivated and doesn’t really rely on anyone but herself. It’s just the way things are and it’s what she knows. She hasn’t really gotten close to anyone or rather experienced feelings towards a man other than for a night of fun. Chess is more of a seeker than a doer I think. She is more comfortable behind her camera than she is in front of it. She is amazing at what she does. She can capture a photo and turn it into something more.

When see has to shoot Finn and his teammates for a charity, Finn just does something to her. Feelings start to creep up. Feelings she has never felt before. Finn is the total opposite from what she normally goes for. He’s cocky, a jock and thinks he is worthy of everyone and everything. Chess wants no part in that. But as she is taking pictures of him, she sees a different side of him. A side that is vulnerable, a side that the public does not see. Once she gets him talking he starts to open up and get comfortable with her. Finn is not the guy she pegged out to be and her body is reacting to him.

Finn and Chess come from two completely different worlds. But yet, they can’t stop thinking about one another. A friendship is starting to form between the two. When Chess needs a place to stay Finn is quick to offer her a room with him. He has never had to deal with a woman in his house before but with Chess he’s comfortable with her. I love the connection between the two of them. Yes, the sexual tension is there its very clear, but neither one of them act on it. Not wanting to cross that line. They form a rather comfortable routine with one another, which comes off weird to them since they have never done this type of thing before.

Once I started to get to know Finn, I totally swooned over him. He is not who I expected from him. I pretty much got the same result as Chess but Finn started to show his true colors and started to open up to her. I ended up falling for who he really was inside. Knowing about his passion for football is one thing but then his love for his family? Wow. Finn always gets what he wants and when his feelings for Chess start to blur he wants her. He really does wear his heart on his sleeve. It’s funny watching Chess and Finn dance around their feelings for one another. It’s like, come one just get together already. Finn is all in, which I love. But Chess has lots of reservations. His past reputation seems to haunt her. It’s now up to Finn to help her through it all. And I loved every single minute of it. you will end up falling for Finn too.

Kristen Callihan is an author because there is nothing else she’d rather be. She is a three-time RITA nominee and winner of two RT Reviewer’s Choice awards. Her novels have garnered starred reviews from Publisher’s Weekly and the Library Journal, as well as being awarded top picks by many reviewers. Her debut book FIRELIGHT received RT Magazine’s Seal of Excellence, was named a best book of the year by Library Journal, best book of Spring 2012 by Publisher’s Weekly, and was named the best romance book of 2012 by ALA RUSA. When she is not writing, she is reading.
Posted by Naughty and Nice Book Blog at 9:14 AM