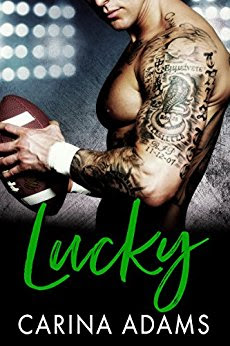 Starting over from scratch, with a new career in a new town, was not what I wanted to do right before I turned thirty. When my best friend came to cheer me up, I played along. I promised her I'd take one last night to let loose and have fun before I embraced my future. A sexy as sin bartender, and the hottest one-night-stand to ever exist, was not part of my plan. Neither was the connection we had. We had nothing in common other than the same sense of humor and a spark neither could ignore. Yet fate kept shoving us together. Lucky was the whole package - smart, athletic, and kind, he was the football hero in our little college town. A filthy talking bad boy, who could have any woman he wanted. Despite all our differences, that woman was me. Sometimes, despite the odds, you roll the dice and go with the flow. Because love is worth it. And this just might be my lucky chance. "One night stand my ass."

This is definitely a hot one. I instantly grasped on to the storyline of this book. A hot one night stand turns into something more. You can't help but fall in love with the characters.

I instantly fell in love with Lucky and who he really is. He's a motivated college athlete who is not just good looking but he is physically fit, a star player and one with brains. He also works hard to support himself and his family.

Lucky and Sunny meet at the bar and they hit it off right away. You can just see the chemistry sizzling right off of them. They both have the best time of their lives and what was supposed to be a one night stands turns into something more. One night is not enough. And let me tell you. The scenes are hot as hell.

They meet again in class. Where they stand on opposite ends of the classroom. This makes it a difficult situation. But they put the past behind them and remain professional. But what happens when they can't stay away from one another? The connection is just that strong. They seem to compliment one another and make each a better person. I can't help but feel bad for what they are going through. I keep rooting for good stuff to happen. But yet, it gave me a bit of anxiety anticipating what would happen next.

When things take a turn and it gets serious, what happens? Is sneaking around worth the risk? Is being together worth the outcome?  It's a risking move but they just can't stay apart. Not only is the only are the physical walls going down but personal walls as well. They just get one another. And slowly getting into one another's hearts.

When someone tries to sabotage Lucky it creates a ripple effect and the past comes around putting Sunny in a bind. All their cards and everything they have worked so hard to achieve will all come to and end.

Can they make it work? After everything that's trying to stop them? Will their luck pull through and keep them together? Is being together worth the risk?

Carina Adams has been writing and creating characters for as long as she can remember, allowing her to fall in love with the next man of her dreams with every new story.Thankfully, fate stepped in and granted her the ultimate wish - a life full of men. Carina lives in a picturesque New England town with her husband, the man who ruined the thought of all others, and two amazing sons who always keep her on her toes.Carina received her MBA in May, but would much rather play with her imaginary friends (the voices in her head) than work her 8 to 5. When she isn’t trying to juggle being a working mom with karate and drama practices, surprising her children with her sci-fi movie knowledge, or writing, you can find her with her nose pressed against her kindle, on the back of her husband’s motorcycle, or living life vicariously as her Derby Girl persona, Writers Block. Carina is currently writing Unfinished Business, the next installment of the Bastards MC novels.
Posted by Naughty and Nice Book Blog at 9:14 AM