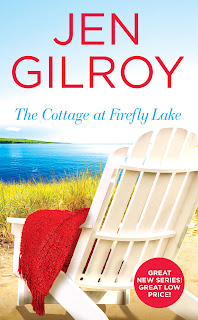 In the tradition of New York Times bestselling authors Susan Wiggs and RaeAnne Thayne comes an emotional second chance love story about redemption and finding your way home, the first in a new series by debut author Jen Gilroy.

Charlotte Gibbs wants nothing more than to put the past behind her, once and for all. But now that she's back at Firefly Lake to sell her mother's cottage, the overwhelming flood of memories reminds her of what she's been missing. Sun-drenched days. Late-night kisses that still shake her to the core. The gentle breeze off the lake, the scent of pine in the air, and the promise of Sean's touch on her skin . . . True, she got her dream job traveling the world. But at what cost?

Sean Carmichael still doesn't know why Charlie disappeared that summer, but after eighteen years, a divorce, and a teenage son he loves more than anything in the world, he's still not over her. All this time and her body still fits against his like a glove. She walked away once when he needed her the most. How can he convince her to stay now? 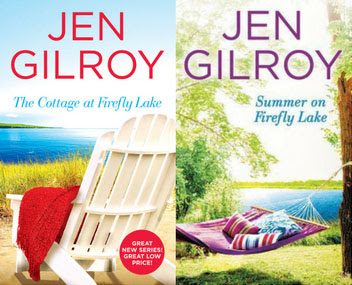 
“Do you still want to sell the cottage?” He took a shallow breath and leaned forward. Which was a mistake because now he was in touching and tasting distance of her.
“Of course.” Charlie looked down, but not before Sean caught the flicker of uncertainty in her eyes. “But my mom loved Firefly Lake. Maybe we can come up with a better option, one that won’t change everything she loved. What do you think?”
Sean’s breathing sped up. By working with her and Mia, he might be able to protect Carmichael’s. Protect his family, his community, and his way of life. But he’d also have to spend more time with Charlie. “I guess I could talk to the chamber of commerce and the Rotary Club.”
“You’re president of the Firefly Lake Rotary Club.” Charlie’s eyes twinkled. “I saw a picture in Nick’s office of the two of you at some Rotary dinner. You have influence.”
“Maybe I do, but why should I use it to help you and your sister?”
“This isn’t about helping us. It’s about Carmichael’s and Firefly Lake, and this whole special area.” Her eyes were wise, seeing through him like always. Seeing what mattered to him.
“I’ll think about it.” His gaze locked with hers and something sizzled between them. The heat that had always been there—but had deepened because they weren’t the kids they’d been.
“We don’t have anything against you.” She took a business card from the holder on the desk and traced the letters of his name. “But Mia. . . she’s dealing with . . .some stuff . . . She’s the only family I’ve got.”
Sean knew all about family loyalty. How it could suffocate you and force you into choices you didn’t want to make. “What kind of stuff?”
“I can’t . . . ” She swallowed, and a pulse worked in her jaw. “A Tat Chee development would hurt a lot of people. Mom wouldn’t have wanted something that hurt people who were her friends. Hurt the place she never forgot. Mia and I don’t want that either.”
“It has nothing to do with you and me?” Sean looked into her face, the girl he’d loved still there beneath the woman she’d become.
“Of course not.” Charlie’s voice trembled.
“Deny it all you want, but we’re still hooked together.” He gave a harsh laugh. “Beyond trying to get it out of our systems, I don’t know what the hell we can do about it.”
Charlie came around the desk. She licked her lips and his body leaped. “Even if there is still something between us, we can’t do anything about it.”
“Starting something again would be a bad idea.” Sean pushed the words out, over the tightness in his chest.
“A very bad idea.” Her voice was a sensual caress.
“What if we can’t help it?” He stood and shoved the chair away, sending it crashing into the wall to overturn. He reached for her, and the shock of her warm, bare skin jolted through him.
“I shouldn’t . . . ” But even as she spoke, she leaned into him, soft, like the Charlie he remembered. Her head fit into the curve of his shoulder like it belonged there.
“Me neither.” He dipped his head and brushed his mouth against her neck, peaches and her scent greeting him. The one he could have picked out blindfolded even after all these years.
“Your mom told me to stay away from you.” She angled her neck toward his mouth.
“I told her to butt out.” He licked the sensitive cord in her neck, and she gasped.
“You did?” She whimpered as he intensified the caress.
He drew back. “You and me, we’re none of her business.”
“There isn’t a you and me. There can’t be. I’m only here for just over two more weeks.” Her words came out in a breathy moan. “Whatever this is, it can’t go anywhere. I don’t want anyone to get hurt.” Her small hands were gentle on his forearms. That gentleness was a side of her she didn’t let many people see.
“I know the rules.” He pulled her close again... 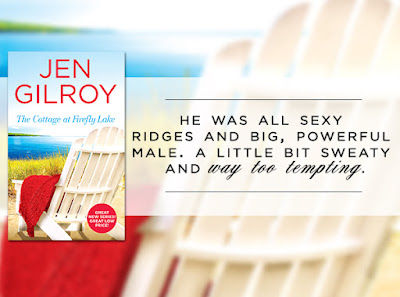 This was a very quick and cute read for me. Its a story about second chance romance, finding your true self and learning how to trust all over again.

Charlotte Gibbs and Sean Carmichael were meant to be together since they were children. The lake and their love for it brought them together. They thought their life would be forever until Charlotte left Sean high and dry to pursue head dreams leaving Sean devastated. Until she returns to the lake years later to sell the family cottage. By returning, not only does she have to see Sean all over again, she needs to face the past that has always followed her.

Sean had to try and start his life over when Charlotte left him and he did his best, gaining a son in the process. But Sean has always been dedicated to his work and making sure every one else was taken care off. His life is then turned off kilter when Charlotte returns back to the lake a completely different person. He notices something different about her and he takes it upon himself to try and help her through whatever it is.

When I finally get Charlotte's story, my heart broke for her. No one should have had to have gone through everything that she has. It broke even more when Sean's side was revealed. All that time wasted, and all that they had to endure just makes your emotions crazy. But more secrets from the past get revealed, her sister's problems rushing the sale of the house and Charlotte's pending departure looms near. Sean seems to be making headway with Charlotte and having a relationship with her, but with everything happening all at once they can't seem to find common ground.

Can Charlotte and Sean find their one back to one another? What will their future be at the lake? Can Sean finally get through to Charlotte? Will they  make a second chance work?

This booked flowed really well for me and not your typical send chance romance book. I loved the story behind it and what they had to go through in order to try and find one another again. 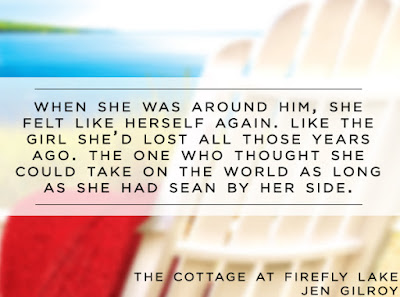 Jen Gilroy grew up under the big sky of western Canada. After many years in England, she now lives in a small town in eastern Ontario where her Irish ancestors settled in the nineteenth century. She's worked in higher education and international marketing but, after spending too much time in airports and away from her family, traded the 9-5 to write contemporary romance to bring readers' hearts home.

A small-town girl at heart, Jen likes ice cream, diners, vintage style and all things country. Her husband, Tech Guy, is her real-life romance hero, and her daughter, English Rose, teaches her to cherish the blessings in the everyday.