REVIEW ~ LEGALLY MINE by Nicole French 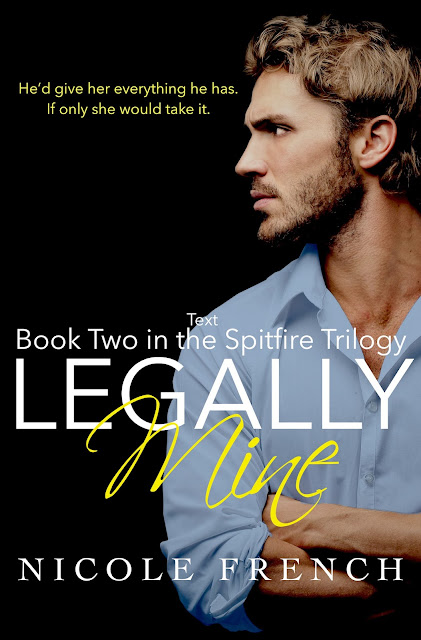 Blurb:
What's the point of falling in love if it only breaks your heart?

Skylar Crosby should be on top of the world. She's just graduated from the best law school in the country and is supposed to kick-start a successful career. But with her father still recovering from his gambling addiction, her absentee mother suddenly reappearing in her life, and the stresses of studying for the bar exam, Skylar is feeling more like she's holding the world up rather than standing on top of it. And then, of course, there's the matter of her utterly smashed heart.

In just a few short months, brilliant attorney and all-around tycoon Brandon Sterling quickly became the sun to Skylar's universe only to twist it upside down and inside out with his secrets, leaving her with a decision to make that will change both of their lives forever. And although Brandon can't forget the girl who gave him back his heart, sudden changes in his own complicated life will make getting her back that much more difficult. Luckily, Brandon Sterling has never been one to walk away from a challenge.

Even when the whole world seems united against them, it's possible that they are their own worst enemies. Legally Mine, the second book in the explosive Spitfire series, continues the saga of Skylar and Brandon as two stubborn, intelligent, damaged people trying to learn how to let themselves love and be loved return. 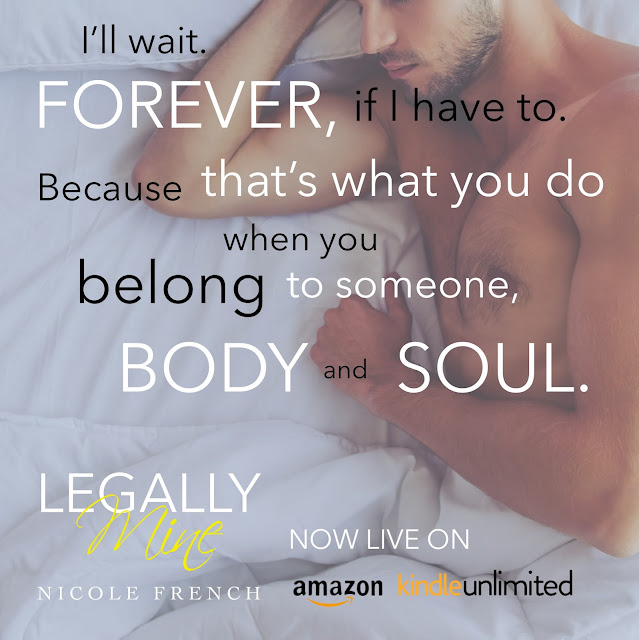 This is the second installment of this trilogy series and let me tell you… she gets you again. I mean, yes I know this is a trilogy but gosh darn it, Nicole loves to leave you hanging. Right when it was getting good. Just saying.

My heart broke for Skylar in this book. She is left without Brandon and is left to deal with her situation alone. While trying to move on without him, she has to make the biggest decision of her life. It’s like Nicole just wanted to crush you. I felt right with Skylar and damn did I want to just give her one big hug and tell her it would be okay. No one should have to go through life alone like that.

When she finally comes back to it, she puts her feelings and her happiness aside so that her family will be well taken care of. Skylar needs to make sure her Bubbe keeps the house and that her father gets better. It can’t happen if she says in New York. The past will not always be the past. It has a way to wiggle its way back in if you are not prepared. That’s what I have found out with this book. All around.

Brandon has had a hard time moving on from Skylar, but he needs to after all the radio silence. But when she makes an appearance back to town his mind goes back to fixing things. Back together, they are still combustible when together. It’s like no time has gone between them. I really do love them together. It’s like they bring out the best in one another. I saw a different side of Brandon. A softer side, one who wanted to try and change for Skylar. There was though a lot of push and pulling between Skylar and Brandon. Honestly, more than necessary. Some parts just had me wishing they got their act together so we can skip all this back and forth. And the fact that Brandon still had not taken care of his business, I felt as if he was just stringing her along. He needs to hurry that up.

Let’s talk about Skylar’s family coming back into the picture. I never liked her mom and had a bad feeling about her. I feel bad for her siblings though, to have to go through life with those parents. I wanted to go and bitch slap her mom and her husband. I was furious for Skylar. Why would anyone do that to their own flesh and blood!? But I’m hoping karma will come around quick. Here Skylar will learn who her true friends and who is only there to watch her fall.

Brandon’s life is about to change and if Skylar is involved his life will change completely as well. It doesn’t seem like the life Skylar has always envisioned for herself. But for Brandon, will she give up who she truly is?

Everyone seems to want Brandon and Skylar together again. That or they want something from them. Will they be able to beat the odds and let love win? Or will everyone prevail in this situation?

Her dad, when Brandon got involved I knew that would be the downfall of it all. But how could you do that to me with the ending!! I’m going to need the final book ASAP!! I truly hope he (her father) can figure his shit out and get better to finally be the father that Skylar needs. She needs to start being taken care of not always sacrificing herself for everyone. Every girl needs that.

Can we please have a Jane and Eric book, like soon? Their “hatred” for one another is soo cute. They need their story to be told.

There is just too much to this book, you have to read it for yourself in order to love it. One little thing will just create a domino effect and give the book away. 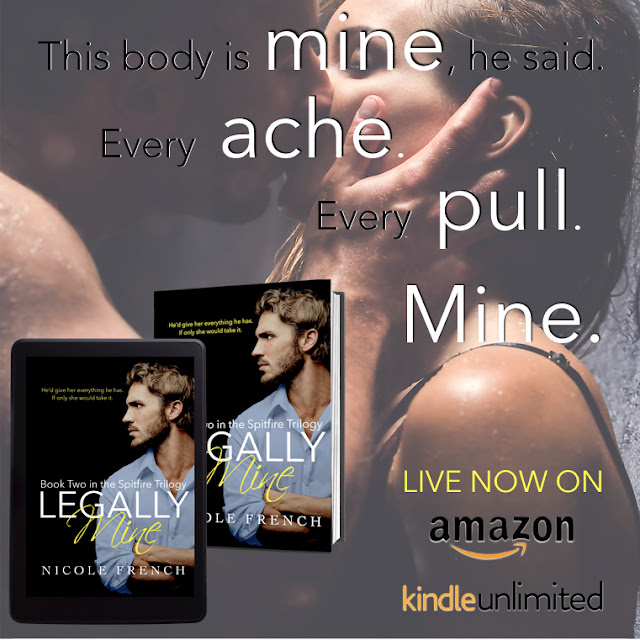 Excerpt:
We stared at each other, bristling and irritated. Finally, eager to break the stare-off, I pushed off the wall with my feet to float on my back. I stretched toward the opposite end of the pool, arching in a way that made my breasts peak toward the ceiling, then flipped backward until I popped up again through the water. When I surfaced, Brandon was watching intently, a different kind of fire in his ice-blue eyes. Did he wanted to strangle me or eat me alive? It was hard to tell the difference.
"I know what you're doing," he said finally, low and almost menacing.
I continued to tread water, then flipped over again, slowing my movements even more. "Do you?"
"Get out of there, will you?" Brandon reached a hand out, beckoning me to swim back.
I just stared at it. "No," I said. "I'm not done with my workout."
I rolled backward through the water once more, then resurfaced to find Brandon standing up. His face looked like murder, but the tenting in his pants spoke of something else.
"Get out of the pool, Red," Brandon said, barely concealing his frustration.
"Stop telling me what to do."
"I'm not joking. Get out."
"No."
"Get out of the fuckin' pool, Skylar!" Brandon shouted, his South Boston accent out in full force. He thrust both hands into his hair and yanked. "Fuck!"
I just kept treading while sounds of the water lapping on the sides of the pool filled the space between us. Brandon stared at me, then dropped his hands.
"Fine," he said as he started to remove his vest. "Have it your way." He unbuttoned his shirt and tossed them both on the lounge chair next to him.
"What are you doing?" I asked as he started pulling off his shoes and socks, which then joined the clothes.
"What do you think?" Brandon snapped as he unbuckled his belt. "You won't come out, so I'm coming in."
"In your underwear?"
He pulled off his pants and threw them on top of his other things. He now stood in front of me in nothing but his boxer briefs, his perfectly sculpted body, including his sizable erection, on display for anyone to see. The reflected light glimmered over the broad lines of his shoulders and pectorals, the v-shaped muscles of his abdomen, the lean, long shapes of his thighs. Now he was the one who looked like a Greek statue.
I bit my lip, willing the heat building in my core to calm down.
"Well, it's either that or nothing at all," Brandon said just before he jumped in with a splash.
Tall as he was, he didn't need to tread water, but he still dipped underwater and surfaced like some kind of mythical sea god. The water glistened on his muscles as he tracked me like a shark.
My legs somehow kept circling, but the rest of me stilled. I wasn't in the mood to be pounced on, as Brandon sometimes did. He often used sex as a Band-Aid, and right now, I wasn't okay with that, even if the water droplets sliding over his pecs were getting me pretty hot and bothered.
My instincts took over: fight or flight. I dove underneath the blue lane barrier and swam to the corner of the pool. Before I could climb up the ladder, though, I found myself caged by two tanned, rock-hard arms.
"I don't think so."
Brandon's voice vibrated in my ear, and I froze. I turned slowly, and he released his grip on the ladder, backing off just enough so that I could turn around. His gaze bored into me like a drill. But it wasn't just the intensity in his eyes that pinned me to the ledge; it was the hurt there as well.
"You can't keep doing this," Brandon said in a low, taut voice.
Around me, his body was pulled tight as a drum. The evening had taken a toll on him too.
"You can't keep running away every time I do something you don't like."
"I don't––"
"You do," he cut me off gently.
We were close enough that he didn't need to raise his voice. Around me, his muscles flexed even more.
"Every time. My office. The airport. After you found out about Miranda, about Messina's payoff. That night at the club. And now tonight. If I railroad, Red, you run."
I heard my grandmother's words to me in Brooklyn after I had escaped there in April. She had compared me to my mother, who couldn't even stand beside me for the length of a party. And now I was becoming just like her.
"My life is complicated," Brandon continued. "I know that. I know it's not easy for you. But I am yours, Skylar, body and soul. But I can't be yours if you're not mine too." 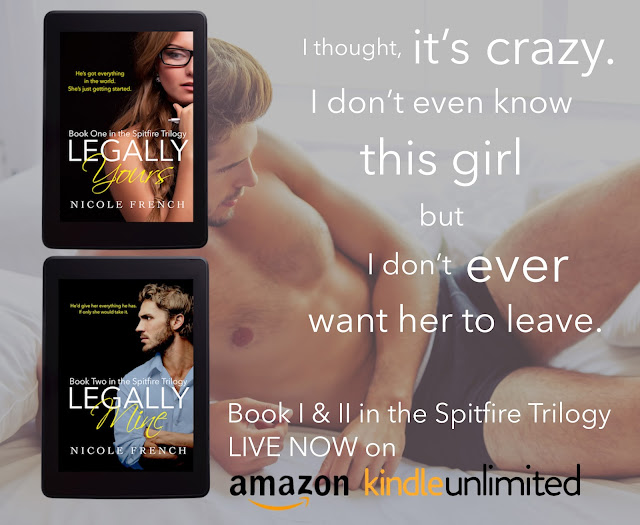 Social Media Post:
*****NEW RELEASE*****
LEGALLY MINE, Book #2 in the Spitfire Trilogy by Nicole French, is #LIVE, and on sale for a special price of #99cents!
Amazon US: http://amzn.to/2sEhXYB
Amazon UK: http://amzn.to/2tyamev
The price will go up to $2.99 next week, so don't miss out! #Oneclick with your friends and SHARE, SHARE, SHARE!
#legallymine #spitfire #nicolefrench #brandonsterling #skylarcrosby #billionaire #romance #romhero #nowlive

Author Info:
Nicole French is an East Coast/West Coast hybrid creature, Springsteen fanatic, hopeless romantic, and total bookworm. When not writing fiction or teaching writing classes, she is hanging out with her family, playing soccer with the rest of the thirty-plus crowd in Seattle, or going on dates with her husband. In her spare time, she likes to go running with her dog, Greta, or practice the piano, but never seems to do either one of these things as much as she should.

Posted by Naughty and Nice Book Blog at 5:49 PM