Aidan Hunter’s heart has been broken twice. The first time was his mistake; Tori belonged to his brother. The second time, an entirely different kind of void remained. After months of trying to understand how Maria perpetrated such heartless betrayal, the only thing Aidan has left is the desire to seek revenge. With everything in place to work the hustle of a lifetime, Aidan learns the truth and he’ll stop at nothing to get Maria back. Only in an unexpected twist, Peyton Miles, a woman completely opposite of Maria, begins to worm her way into Aidan’s heart. She’s mature, sexy and confident, and she doesn’t need to be saved. When an irreversible mistake is made, Aidan loses both women. Fate has other plans and a second chance emerges. Can Aidan let go of the guilt he carries and allow himself happiness? Or will he continue to fight his feelings and intentionally sabotage any hope of a relationship?

“There’s a monster living inside of me, an endless voice with devious intentions.”
“At times I want to evict the monster, but without him, I have to feel the pain that scheming bitch left behind.”

I was invested in Tug since the first book in the Irreparable series. The way KJ left us with Tug in the first book, I was waiting anxiously for this book. KJ just captivates you attention from the moment you start the book until the very end. There is so much angst and drama packed into this very book. You won’t want to put it down. This book definitely made it worth the wait…

“No one will make me feel alive the way she did.”

Aiden Hunter got the biggest hustle of his life when Maria took Javier and just left him one day. He loved them both fiercely and then all of a sudden, he was ripped apart when they left. Life without them has been numb. Barely seeing his family, the monotony of work just to keep busy, and hooking up with numerous nameless women just to satisfy his release. As selfish as he may be, that’s who he has become. His needs have become a priority in the bedroom. The fun loving, caring, kind hearted Tug we knew and loved no longer existed. He has turned into a moody, arrogant asshole, who walks around like he doesn’t give a care in the world. Aiden has even distanced himself from his family. The family that has always been the glue to his world.

“It is said that people come into your life for a reason and I believe Peyton showed up when I needed her the most, like an angel in the waiting.”

Peyton Miles is your beautiful, confident, sassy, independent woman who doesn’t need nor want any help from anyone. She comes into play to do some redo Aiden’s loft. Even with Aiden’s current mood, she doesn’t take any of his crap from him. She’s able to dish it right back to him. Which I love. There’s some kind of physical chemistry in the air, right off the bat. And they both know it.  She is all business with him, constantly denying the playful passes that Aiden is throwing at her. He knows how good they can be. She knows he will break her heart. Peyton has had her fair share of broken hearts and is not in the market for any more. However, despite Aiden’s cocky and douchebag behavior, she seems to bring out a playful side of him under that rough exterior. She senses that he has recently had his heart crushed and tries to reassure him that life does indeed go on.

“No you’re a good guy with a huge heart that’s been through bad times. Knowing the difference comes from how much control you give your past.”

Aiden feels as if he is destined to be alone for the rest of his life. His love for Maria is still very strong, and he hasn’t stopped his search for her. His family is relentless in wanting to help him to move on yet he doesn’t want to hear it. He just isn’t ready. But it is Peyton who helps him see things clearly. After spending some time with her, he sees it’s a possibility of being happy with her and can’t see his future without her. He is breaking that barrier through his heart. And she herself is giving in to that attraction that sears through them both. Though when Aiden finds the truth about Maria, he must make a choice that will devastate someone. He is bound to lose someone he cares about. But sometimes, even the wrong choices we think we make are the ones we can’t control in the end.

“I fail everyone I ever choose to love. I always choose wrong.”

Will Aiden choose to chase after his past? Or will he choose a new future with Peyton? Or will it all end badly and he will lose them both? Is he ready for that again? Can he deal with that type of pain? And can he live without one of them not in his life?

“Sometimes you don’t see the hustle coming until it’s too late.”

Maria loved Aiden with everything she had and she had to do what she felt was right for both her family and for Aiden. But sometimes our choices aren't always the best ones. I had mixed feelings about Maria in this book, but you will make your decision about her when you read it. You will definitely wall in love with Aiden a lot more after you read this book. I know I sure did. The raw emotions that he goes through in this one, surpasses the other ones that he’s ever gone through. There were times where I go from wanting to slap some sense into him to where I want to just wrap my arms around him. And Peyton..I loved that KJ brought her to Aiden. She’s a perfect fit for him. It’s like she balances him out. And I absolutely love the fact that she challenges him and take his crap for nothing. And the family. I love the fact that despite the fact that everything that they’ve been through, they are always there for one another in the end. 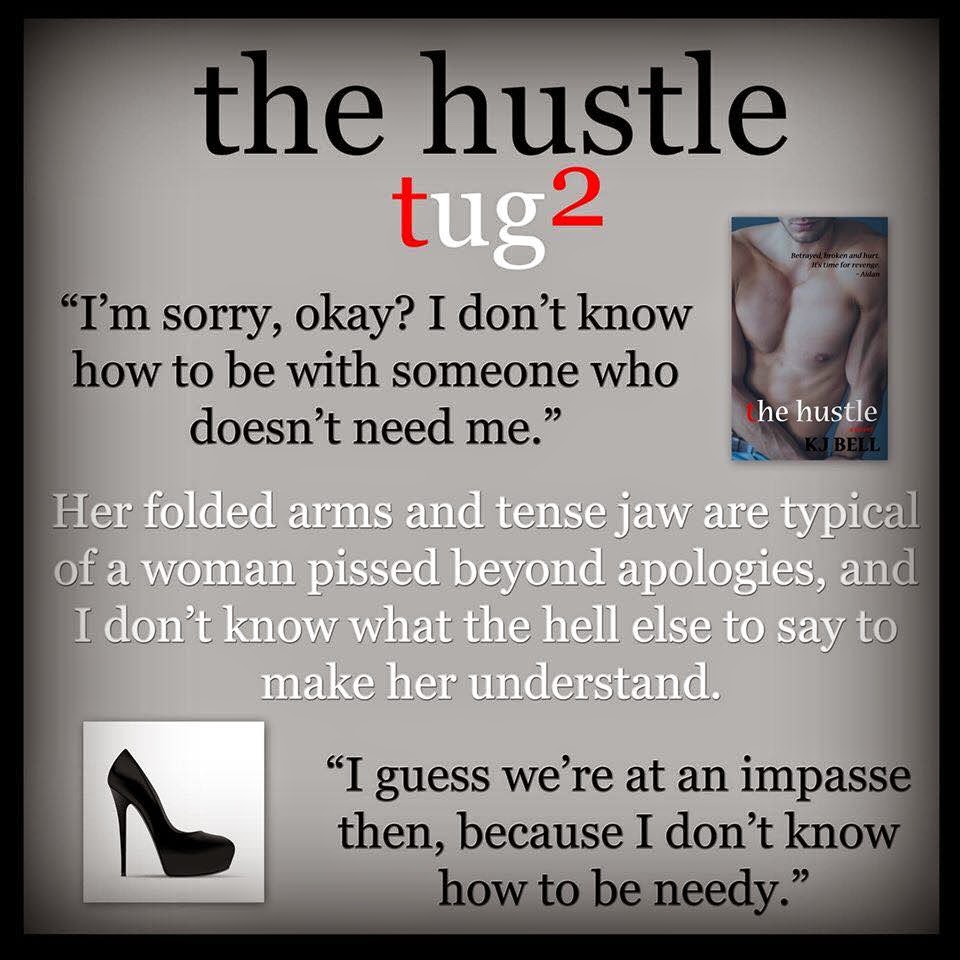 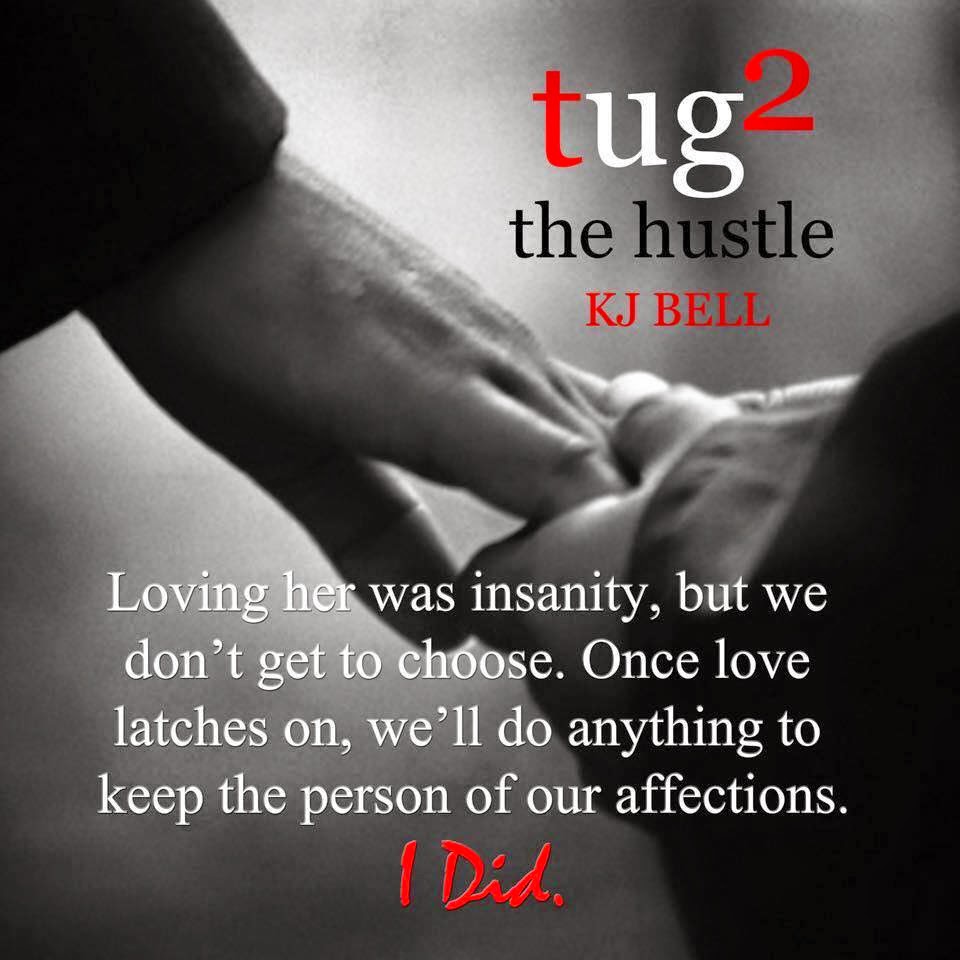 Appearances are not always reality… That’s what twenty-year old Tori discovers when she moves in with her best friend, Liv for the summer. Liv’s older brother Brady is everything Tori knows is wrong for her, yet he invokes emotions deep in her soul that she’s never felt with anyone else. When the two eventually succumb to their feelings, Tori realizes Brady is not the same confident guy she’s secretly loved for years. Tori desperately wants Brady to confide in her, but he refuses to talk about the secrets that have drastically changed his life. Turning to the one person that always makes her laugh, she begins spending time with the younger brother, Tug. The two grow closer and Tori wonders if her feelings for Tug run deeper than the “just buddies” status they’ve always shared. As she begins to explore her feelings, the conflict between brothers, she’d hoped to avoid erupts. She has to choose. When Brady finally reveals his secrets, Tori makes her decision; one that may leave them all Irreparably Broken.
AMAZON / iTunes

With their past behind them and a baby on the way, life for Brady and Tori is finally on track. That is, until tragedy divides them. Unable to cope, Tori moves to Minnesota to be with her parents. Heartbroken and alone, Brady throws himself into his music. His career takes off and Tori assumes Brady left her behind. After a chance run in with Brady’s brother, Tug, Tori makes a decision. One that leads to Irreversible Damage.
AMAZON / iTunes

Tug is a spinoff novel from the Irreparable Series. While it can be read as a standalone, it is suggested you read the series first to fully understand the character. Aidan Hunter lost the only girl he ever loved to his older brother. To numb his pain, he drinks in excess, parties too hard, and sleeps with countless women. When his family expresses concern, he does what he's been taught to do—fake it and pretend his life is perfect. Pretend he loves his new girl and pretend his heart isn’t broken. Maria Santiago is simply trying to survive each day until she finishes college. As a single mother, life is a constant struggle. Add running from a dangerous past and working in the oldest profession, and all she has is hope for a better life. Hope one day she will no longer feel shame and hope her past never catches up with her. After Aidan pays to spend one wild night with Maria, pretending to be unaffected by her is impossible. Their night comes to an explosive end and Maria hopes she never sees him again, but Aidan refuses to give up. As Maria begins to accept that Aidan’s feelings for her are genuine, someone from her past threatens her life. Aidan’s not intimidated and takes a huge risk to protect her. Will the risk pay off and allow Aidan the opportunity to provide Maria with the better life she’s been hoping for?
AMAZON / iTunes

K J Bell currently lives in California with her husband and three children. As a mother of three, when she’s not writing, she’s usually carting one of her children to their various activities. She enjoys reading, and music, and is equally addicted to both. Writing is a passion she simply can’t live without.

Posted by Naughty and Nice Book Blog at 1:50 PM