The Simple Wild by K.A. Tucker 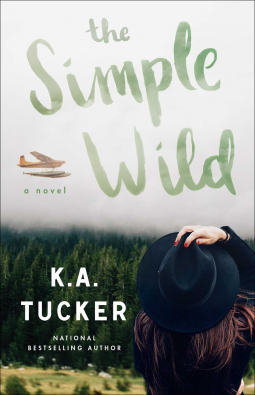 City girl Calla Fletcher attempts to reconnect with her estranged father, and unwittingly finds herself torn between her desire to return to the bustle of Toronto and a budding relationship with a rugged Alaskan pilot in this masterful new romance from acclaimed author K.A. Tucker.

Calla Fletcher was two when her mother took her and fled the Alaskan wild, unable to handle the isolation of the extreme, rural lifestyle, leaving behind Calla’s father, Wren Fletcher, in the process. Calla never looked back, and at twenty-six, a busy life in Toronto is all she knows. But when her father reaches out to inform her that his days are numbered, Calla knows that it’s time to make the long trip back to the remote frontier town where she was born.


She braves the roaming wildlife, the odd daylight hours, the exorbitant prices, and even the occasional—dear God—outhouse, all for the chance to connect with her father: a man who, despite his many faults, she can’t help but care for. While she struggles to adjust to this new subarctic environment, Jonah—the quiet, brooding, and proud Alaskan pilot who keeps her father’s charter plane company operational—can’t imagine calling anywhere else home. And he’s clearly waiting with one hand on the throttle to fly this city girl back to where she belongs, convinced that she’s too pampered to handle the wild.

Jonah is probably right, but Calla is determined to prove him wrong. As time passes, she unexpectedly finds herself forming a bond with the burly pilot. As his undercurrent of disapproval dwindles, it’s replaced by friendship—or perhaps something deeper? But Calla is not in Alaska to stay and Jonah will never leave. It would be foolish of her to kindle a romance, to take the same path her parents tried—and failed at—years ago.

It’s a simple truth that turns out to be not so simple after all.

Sometimes you stumble upon a book that is life changing. The Simple Wild is one of those.  Calla has been estranged from her father, Wren for years. She moved away from Alaska when she was two years old.  After years of not speaking with her father, she finds herself faced with a decision. Will she return to Alaska when she receives a call concerning her father?

Upon arrival in Alaska, Calla is met at the airport by Jonah. Immediately the two of them have issues. One look at Calla and Jonah thinks he has her figured out. He knows her type.. the pretty entitled type. The spoiled, glam type.  Calla may look the part, but there is more to her picture perfect physique.  She actually has a brain, a work ambition, drive, despite the picture Jonah has painted in this head.

Calla and Jonah are forced to spend time together, being Jonah works for her father. Let me tell you, the relationship between these two, had me laughing out loud. For as good as Jonah dishes it out, Calla dishes it back.

While navigating her relationship with her father, neither know how to approach their broken relationship. Both seem to be doing a dance around each other, not wanting what to say, not knowing if their relationship can be fixed.  When Calla's time is up and she is faced with the decision to leave, will she?  Will she stay in Alaska, the place she heard so much negative things about from her mother?  Will Calla open her heart to her father... to Alaska...  to Jonah?

Alaska is all that Wren known, all that he wanted. It seems to be all that Jonah wants as well. When the friendship line blurs between Calla and Jonah, will they be able to recover from it. Can they go back to what things were before they knew each other?  Is Jonah enough to make Calla reconsider her position on staying in Alaska?  Is Jonah willing to leave Alaska when Calla returns to Toronto?  Is love ever simple, because in Alaska, it sure as heck isn't.

I LOVED this story. K.A. Tucker has a way to take you on a journey that you never want to come back from. I felt the pain that Calla felt. The pain that Jonah felt when he lost it all. Is

Posted by Naughty and Nice Book Blog at 10:25 AM