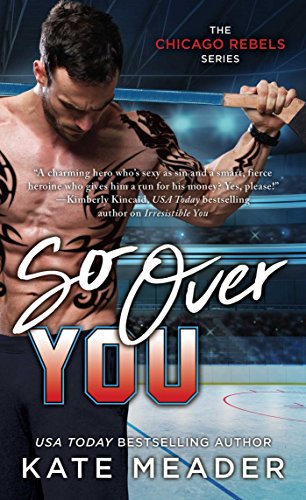 Three estranged sisters struggle to sustain their late father’s failing hockey franchise in Kate Meader’s sizzling Chicago Rebels series. In this second entry, middle sister Isobel is at a crossroads in her personal and professional lives. But both are about to get a significant boost with the addition of a domineering Russian powerhouse to the Rebels....Isobel Chase knows hockey. She played NCAA, won Olympic silver, and made it thirty-seven minutes into the new National Women’s Hockey League before an injury sidelined her dreams. Those who can’t, coach, and a position as a skating consultant to her late father’s hockey franchise, the Chicago Rebels, seems like a perfect fit. Until she’s assigned her first job: the man who skated into her heart as a teen and relieved her of her pesky virginity. These days, left-winger Vadim Petrov is known as the Czar of Pleasure, a magnet for puck bunnies and the tabloids alike. But back then... let’s just say his inability to sink the puck left Isobel frustratingly scoreless.Vadim has a first name that means “ruler,” and it doesn’t stop at his birth certificate. He dominates on the ice, the practice rink, and in the backseat of a limo. But a knee injury has produced a bad year, and bad years in the NHL don’t go unrewarded. His penance? To be traded to a troubled team where his personal coach is Isobel Chase, the woman who drove him wild years ago when they were hormonal teens. But apparently the feeling was not entirely mutual.That Vadim might have failed to give Isobel the pleasure that was her right is intolerable, and he plans to make it up to her—one bone-melting orgasm at a time. After all, no player can perfect his game without a helluva lot of practice...

I am loving the Chicago Rebel Series! This second chance romance had me hooked! Isobel was the one women Vadim could see himself loving. Vadim took Isobel's virginity, her father made sure they wouldn’t be together and made his hopeful career in the NHL a nightmare. Isobel wanted her fathers approval the only daughter to play hockey making it to the Women’s Hockey league but had a career-ending injury.  When Vadim is traded to the Rebels these two are forced to work together again!

These two were great together and I loved their story. There wasn’t too much angst just enough to keep the story interesting. I’m looking forward to the next book in the series.

Posted by Naughty and Nice Book Blog at 1:02 PM